I finally managed to secure a stretch of the upper Avon within cycling distance after buying the Coventry book from Lanes tackle. The guy in the shop assured me that not only would I be fishing alone but also that most of the fish had probably never been caught before. Close by, lightly fished, wild, uncaught inhabitants, and according to Coventry AA, the chance of a barbel amongst the chub, perch, roach and dace. Perfect fishing. What could be better?

On arrival things looked very promising. So, I slung my quiver and bag over my shoulders and proceeded to open enquiries into the nature of the river itself. My plan was to investigate the two meadows either side of the very pretty medieval five arched bridge where the Fosse Way crosses the stream. I walked downstream where the ford in Bretford must once have been; a shallow and fast flowing stretch with glides and pools, and so full of streaming fronds of water crowfoot that at first I thought I'd have nowhere to cast a bait but on top of it. As I moved downstream along the long reedy glide from the bridge I came to a deep looking pool and saw my first fish. A number of small chub were lolling idly at the pool head and a far bigger fish with big white lips was scouting around for morsels, who I watched till he disappeared from view beneath the weed at the near bank. I had not tackled up yet so elected to come back to this swim later and moved on to explore the beat, seeking a swim with a likely hole in the weed into which to cast. 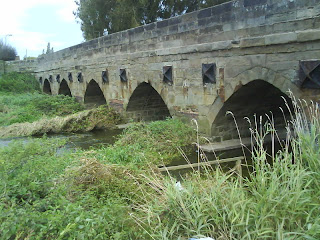 I found what I was looking for some way around the first bend. An attractive pool below a glide with good access to the waters edge where I made a number of casts of a pretty cork-bodied avon float, laying on with a hunk of breadflake, before a great chunk of snorting prime beef stud with impressive testicles went his way through his harem just to check me out - but, awesome as he was, he was on the far bank and though he did not appear to really want to wade across the (suddenly shrinking stream) to evict me, I decided that It really did not feel quite right here anymore, anyhow, and so I gave up my tenure voluntarily, hopping back over the barbed wire and the relative safety of a field of docile, cud preoccupied horses. This set the pattern for the day. Roving from swim to likely swim, settling in for twenty minutes or so, checking over my shoulder for wayward animals and then moving on, all day long, to one swim after another, to the upper meadow and back again, spying more fish, here, and unexpectedly there, switching to a light lead and then to freeline, but with the same response. Nothing doing. Utterly and completely bite free. 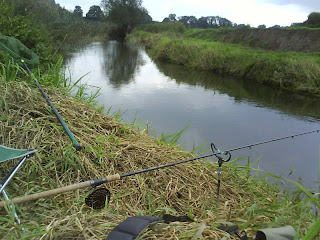 However, this activity of walking and spotting was far from wasted effort. After my exploits on the deep bodied Avon at Leamington and the tea coloured Severn, this was a revelation. An eye opener. For the first time out on a river I could actually see what was, and was not going on. I could see fish, I could see the bottom, and I could see that whatever this stretch of very pretty river held, it was, apart from the odd patrolling chub glimpsed moving above the weed, well and truly hidden beneath it and certainly the substantial rafts of rubbish caught up in the overhanging branches of bankside trees. I thought that In the winter, in a flood, I'd make a proper go of it, and if I fished through the Autumn, as the weed died back, I'd really know it well and be able to cast into features that would be by then, familiar.

Eventually I made my way back to the first swim, where I'd seen the big chub, and settled in to fish the rest of the session there. It felt right, at last. I still had a couple of hours of daylight left and felt that this swim which had enough would produce something interesting I watched a pair of chub moving around the head of the pool and as they crossed a clearing in the crowfoot I fathomed another presence a yard or two to the right. I peered into the water and could just make out the flank of what I took at first to be to be jack pike. As my eyes accustomed themselves to staring at this mirage the outline of the fish began to clarify and I realised that this fish, laying just below the reeds, utterly motionless, presumably waiting for supper to arrive, was something extraordinary. It had a barred flank, a humped back. It was, and I take into account the distorting effects of the surface of water which makes all fish seem much slighter than they really are, a truly enormous perch. Without a doubt the biggest perch I'd ever seen in water, and longer than my welly-shod foot. 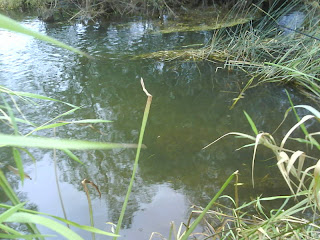 I had to hazard a cast for it, but had not brought the kind of bait a perch of any size would be interested in. I thought that I might be lucky enough to find a slug, or even worm or two in the damp grass of the meadow. I scrabbled around on my knees for a few minutes and parting the grass in one place found two small red worms that would have to make do. I loaded both onto the hook and attempted to freeline the almost weightless rig into the path of the perch. I missed the first cast and the second but as the worms created almost no disturbance whatsoever, hitting the water with only the tiniest of plops, I cast again and again, but failing to put the worms in just the right spot to elicit a take. The worms went in the reeds, to the rear of the fish and to the side but because the snout of the fish was so near to the reed stems I found it nigh impossible to get it right. "If only I had a longer rod' I thought to myself. Eventually I did it right, an inch perfect cast, but unbelievably, nothing much happened. The fish ignored the bait as fluttered past its nose, moved back an inch or two and began to suck water, perhaps savouring the aroma of my long departed worms. I tried again but hooked the worms on a reed, and then before I could retrieve, the perch lunged sideways at a tiny silver flicker and disappeared. It had got what it had so patiently waited for, and I, had not.

I went back to breadflake, freelined into the head of the pool and allowed to drift out of sight. I watched the line for bites and when none came decided to put a little bread and hemp mash into the glide to drift down to the pool, just to see if this would produce, as it usually did wherever else I'd been, some interest. Fifteen minutes later, as the sun passed over the horizon and the shadows deepened, the perch returned to his station behind the reeds. I left him alone. Then the water suddenly, as if a switch had tripped, came alive. Small fish, which I'd not seen a sign of all day long were topping everywhere at once. The river had woken up, at last.

I concentrated on my line where it entered the water, expecting it to twitch and straighten any minute now. When it did precisely what was predicted I was taken aback. The only bite of the entire day. I waited a few tense seconds and struck into a fish with some weight and power which I held for a trembling second, no more, before it shook the hook. Ah well, a blank it would be, I had lost a hard won fish and a now phone call from Judy arriving to pick me up confirmed that sport, and a really quite lovely afternoons pleasure, was over. I don't suppose a mere hookup counts, does it?

The Misery of the Unprepared

It would be a reasonable day. It looked hopeful, not wet, high grey cloud cover, not threatening. So, as it was convenient, I decided to go fish. A couple of hours later on the riverbank it had changed. The weather was now as moody as a rebellious teenager

Return to the Magnificent Severn

We arrived at the Wingfield Arms at Montford bridge at around 6.30 pm and pitched camp right on the riverbank. The weather was typical of late; the signs of breaking clouds and the heartening glimpse of blue followed by a worsening and a thickening and the dark promise of yet more rain. I crept off for quick walk of the beat and met a guy just beyond the A5 bridge fishing two matching barbel rods pointing at the sky