Avon Perch and Bream — Glad I've Had Enough of This...

And it really did look pretty good considering recent weather events. Cold, warm, dry, wet, icy, mushy, topsy turvy, you name it, we've had it. Why, we even had a rare winter thunderstorm the other day with really heavy hail that for a brief moment transformed Longford into a passable imitation of the winter wonderland we didn't get for Christmas.

The water was a really great colour. Not yet bottle green but sandy olive green and fining down well. How could we go wrong here today?

First cast into my current favourite pool, I had a bite on ledgered bread, the bait I always start off with just because I think it tells you the most about prospects. It's a diagnostoic bait where rivers are concerned because in my experience, if dace, chub and roach and the like won't bite on bread you can be sure you're not going to have an easy time of it with any other bait, or any other species come to that. 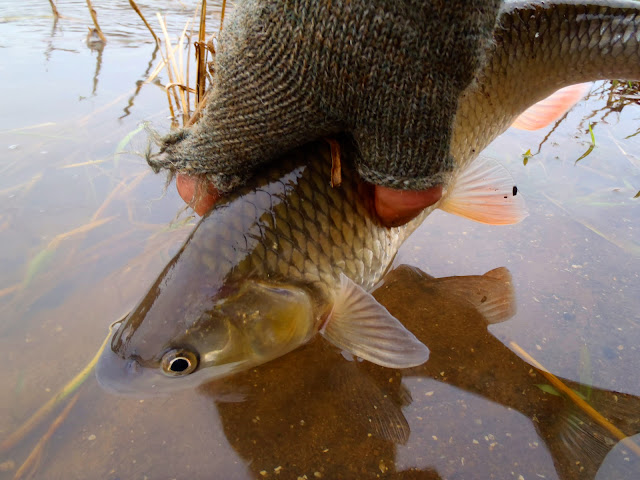 Second cast I had a small chub of a pound and a bit, so things really were going to go well.

Then, after a few more taps on the tip the skies darkened, the wind began to howl, the rain began to fall when the the tip fell still — well, not still as such because it was bouncing about in the rest — but certainly not bouncing to the attention of fish. 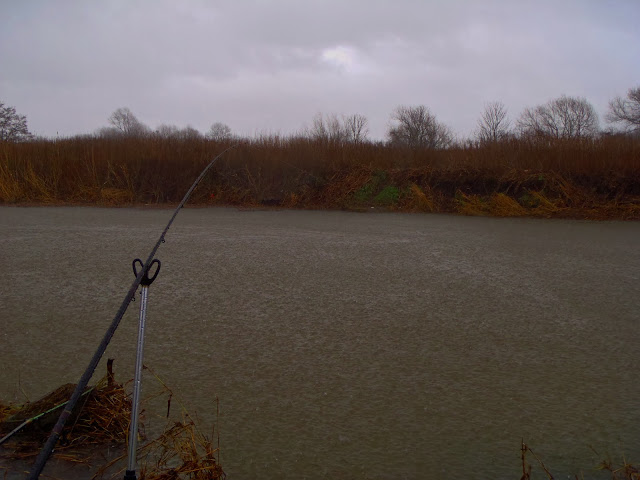 Then it came down in a massive and surprising torrent lasting all of twenty minutes, the brolly flapping, rain drumming on the canvas, and me holding on to the pole hoping no bites would come now because I'd not strike them if they did.

They didn't, and when the rain passed and the wind calmed they didn't return.

Martin hadn't fared so well, either. His day had started as mine had. A few encouraging bites on maggots but then nothing after the welcome cessation of unwanted precipitation. It seemed we were in for a tough one and as it transpired, so we were. I didn't have another bite in the next three hours and nor did he.

In the end I decided to go all out with worms and try for a perch. Worm being the bait of choice for the desperate because when nothing else will work, they just feasibly might...

That's when I found I'd left my river float tube at home and brought the canal one instead. Luckily it contained a little perch bobber amongst the other useless-for-purpose ones, so that was pressed into service. It just about worked. The water in the pool was a good ten feet deep and the tiny thing was strung a long, long way above the low slung bulk shot necessary to have the bait near bottom in this swirling eddy.

It ambled about for an hour before it finally did something positive. I struck, and a fish was on, which turned out to be the target species — a very welcome perch about a pound in weight. Naturally, I thought it would be the be the first of many but I thought wrong. Its shoal mates had other ideas and the next hours passed by as fruitlessly as they had before. 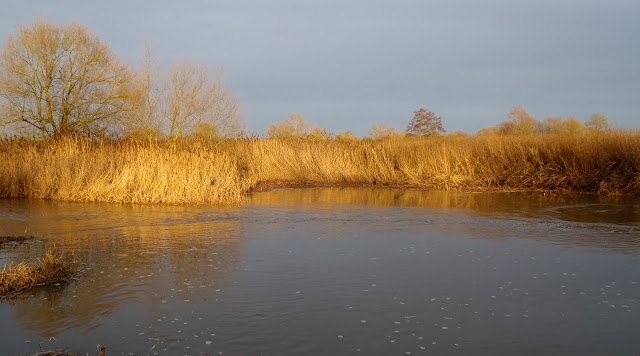 Then the sun came out blasting the land with fantastic low shot beams of light turning the far bank reed beds incandescent orange. All very pretty, but who cares when there's no good reason to enjoy the spectacle? Without fish to catch along with them, Mrs Nature's sublime lighting effects are just so many coffee table photo opportunities.

But I took them anyhow!

Martin came downstream to join me. 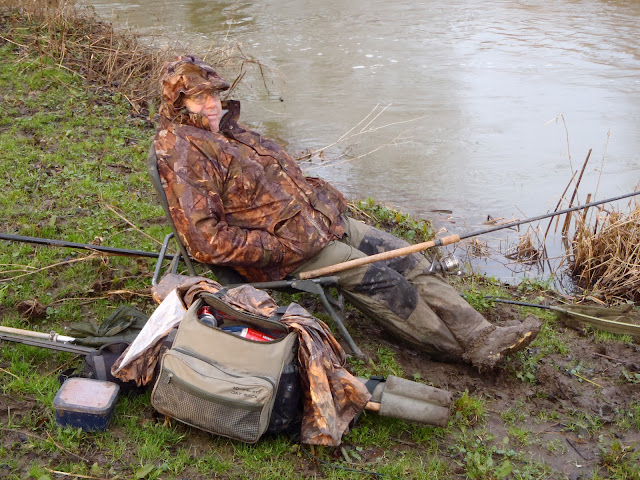 I took pictures of him — then him and me — then me and him — then me myself —and when bored with the exercise went back to fishing.

The perch bobber went about its business, as before. It was kind of relaxing watching a float do what a float does without the prospect that at some point in the foreseeable future it would be doing what it should. And then, about ten minutes after deciding I'd had enough of watching it do what it shouldn't, it dragged under.

Amazingly, the onerous chore of pulling the rig free of a snag turned into the pleasant throb and the enthralling job of a good fish to bank. And it did feel a very good fish too, and it really didn't feel anything like a chub either, and that meant it had to be a perch, and then I got a little worried!

When I saw the broad yellowish flash of an enormously deep flank, way, way down in the pool, I went a little wobbly...

Blimey this was a good perch! A bloody huge perch!! 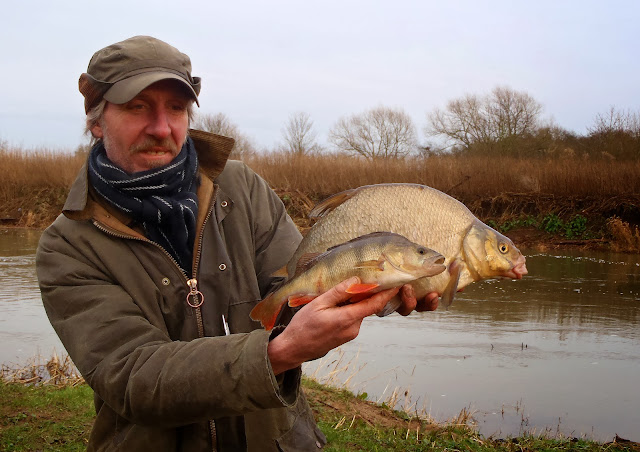 It was only what I'd least expected!

In the closing moments of a long, grim day, a slim three-pound bream — that for a few exciting seconds really was a fat five-pound perch — made me glad I'd had enough of this.