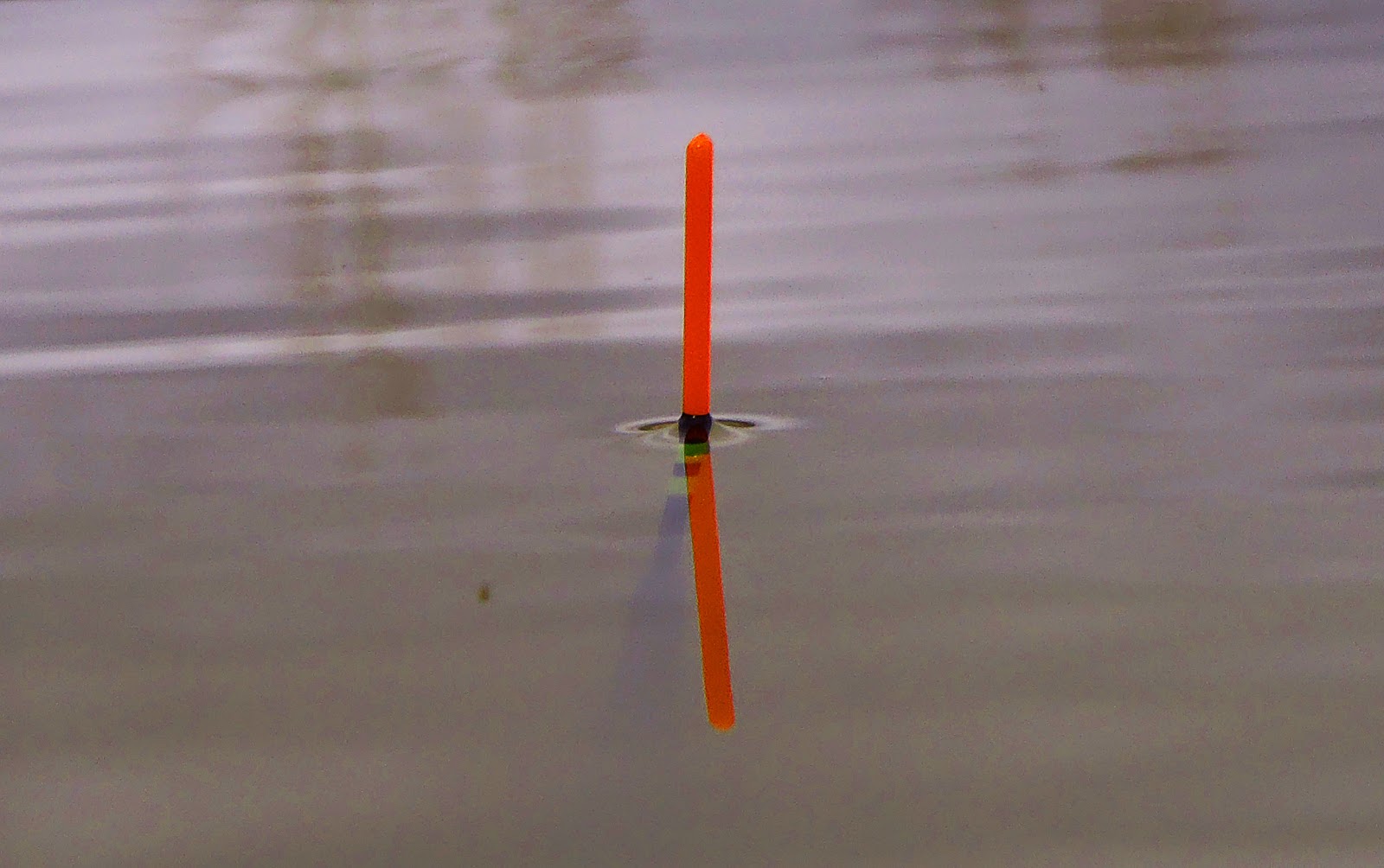 It was blowing hard when we arrived but luckily it was blowing hard in just the right direction and slap into the backside of a screen of dense conifers along our preferred bank. We had shelter. I hate windy fishing more than anything because it gradually wears me down. I'll do most anything to avoid it. 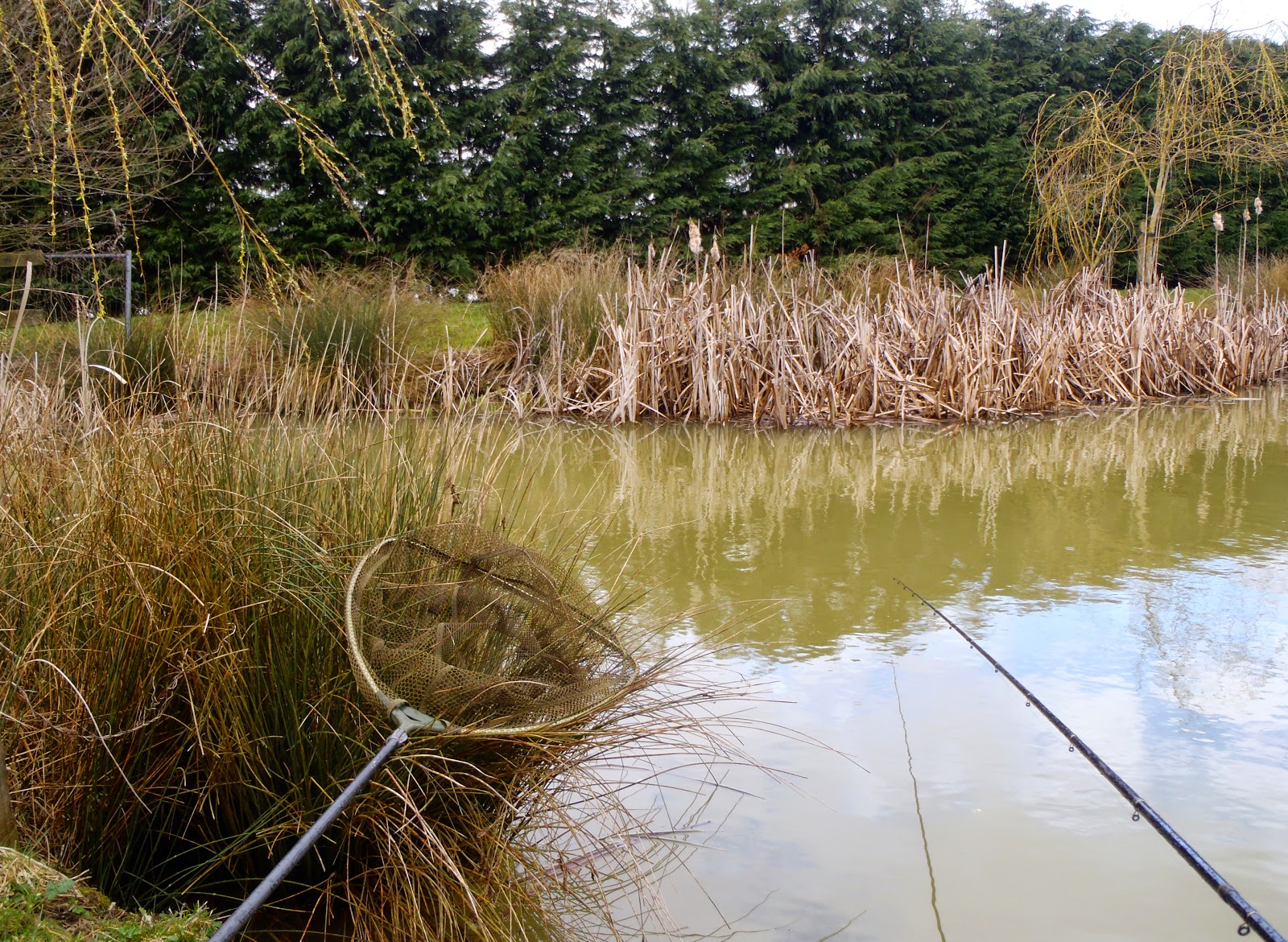 I have a terrible track record of ignominious perch fishing failure. I wrote about this in Fallon's Angler just recently and I'm proud to have admitted it for all the world to read. You see, I cannot catch perch much over a pound and a half under my own steam while those around me achieve two, three and even four pound fish with ease. And no matter what I do to dodge it, this is a hex that dogs me.

About an hour or so in Martin had a small perch. I was contending with graceful lifts of the float followed by plain sail-aways to which I could not connect and when I finally did, and to a good sized perch, bumped it. And then a little while later Martin had a fat two and a half pounder to his credit.

Things were starting to pan out just as they always had... 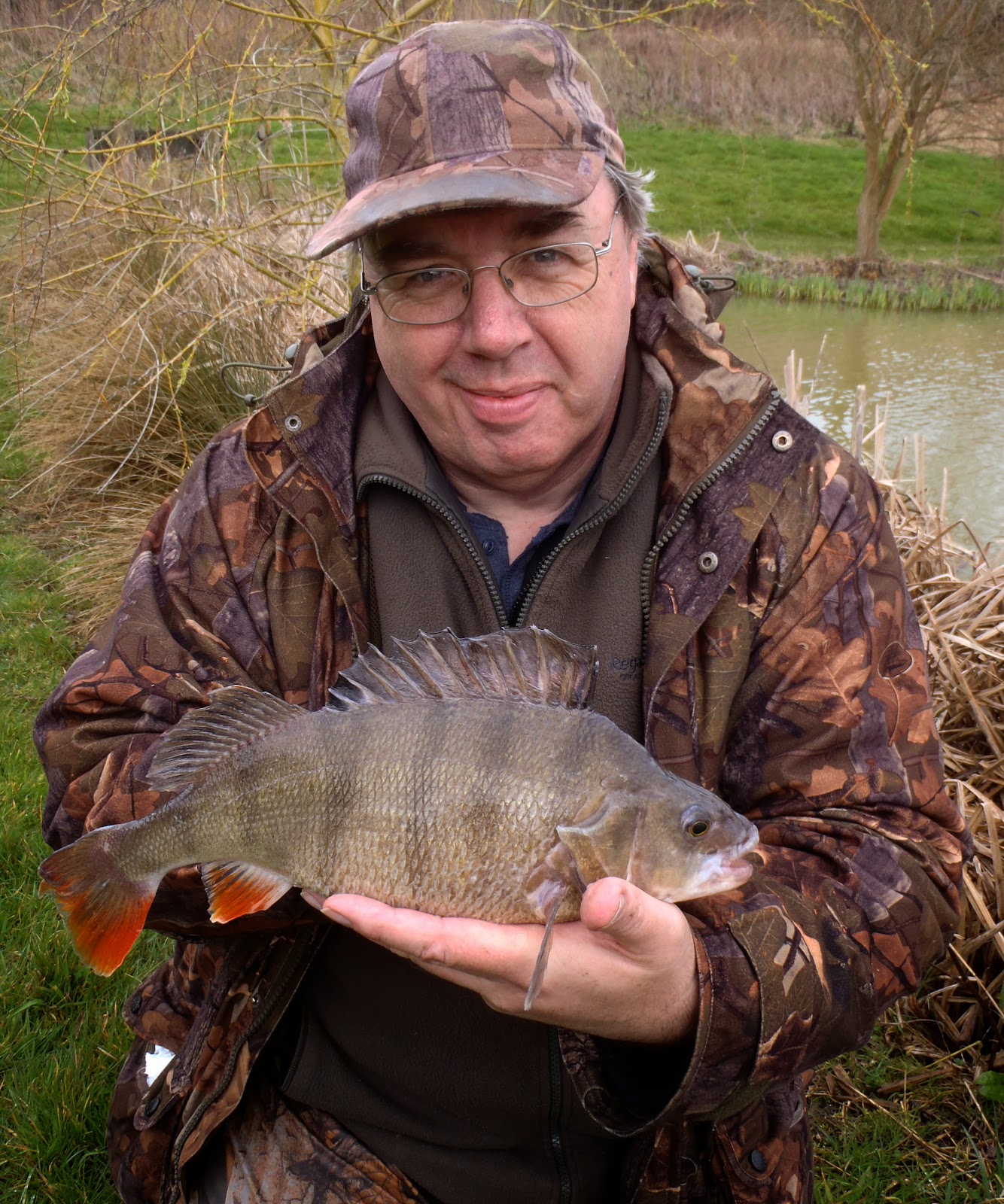 The hook seemed sharp enough, but I changed it anyhow. It made a great difference. Now I connected cleanly with a bite but the big perch I hoped it might be turned out to be one of those worthless F1 carp thingies that match anglers adore, but I can't fathom any earthly reason for. Nevertheless, it seemed that a nice perch would surely come and snaffle my prawn at some point, because bites had been regular till now and looked to continue whilest skies remained overcast. Just as it began to rain I banked a perch of my own. A small one about half a pound in weight, and then ten minutes later a better fish that would be a great disappointment should she remain my best of day, because she pulled the pointer of the scales down to a little under half a pound over the bloody inevitable.

Of course that's when things got tough. The rain stopped and perch stopped biting. The float dithered about for a good two hours longer as the prawn got knocked about by the lake's hoards of tiny gudgeon all too small to swallow even the tail end. Then as the sun warmed the margins we were truly crapped out by F1 carp, who came one after another. The damned things! Only at the bitter end did I finally hook a proper carp, and actually the fight I had against the fish with the tip of a fourteen foot float rod bent seven feet distant from my nose was quite entertaining, but in the end Martin got the net under and we banked it. A very pretty fish. If only it had been a perch the same weight...eh?

You know, that's probably what will happen when my hex finally breaks...

All the way from poky pounds and piddling ounces to a high five in one fell swoop. 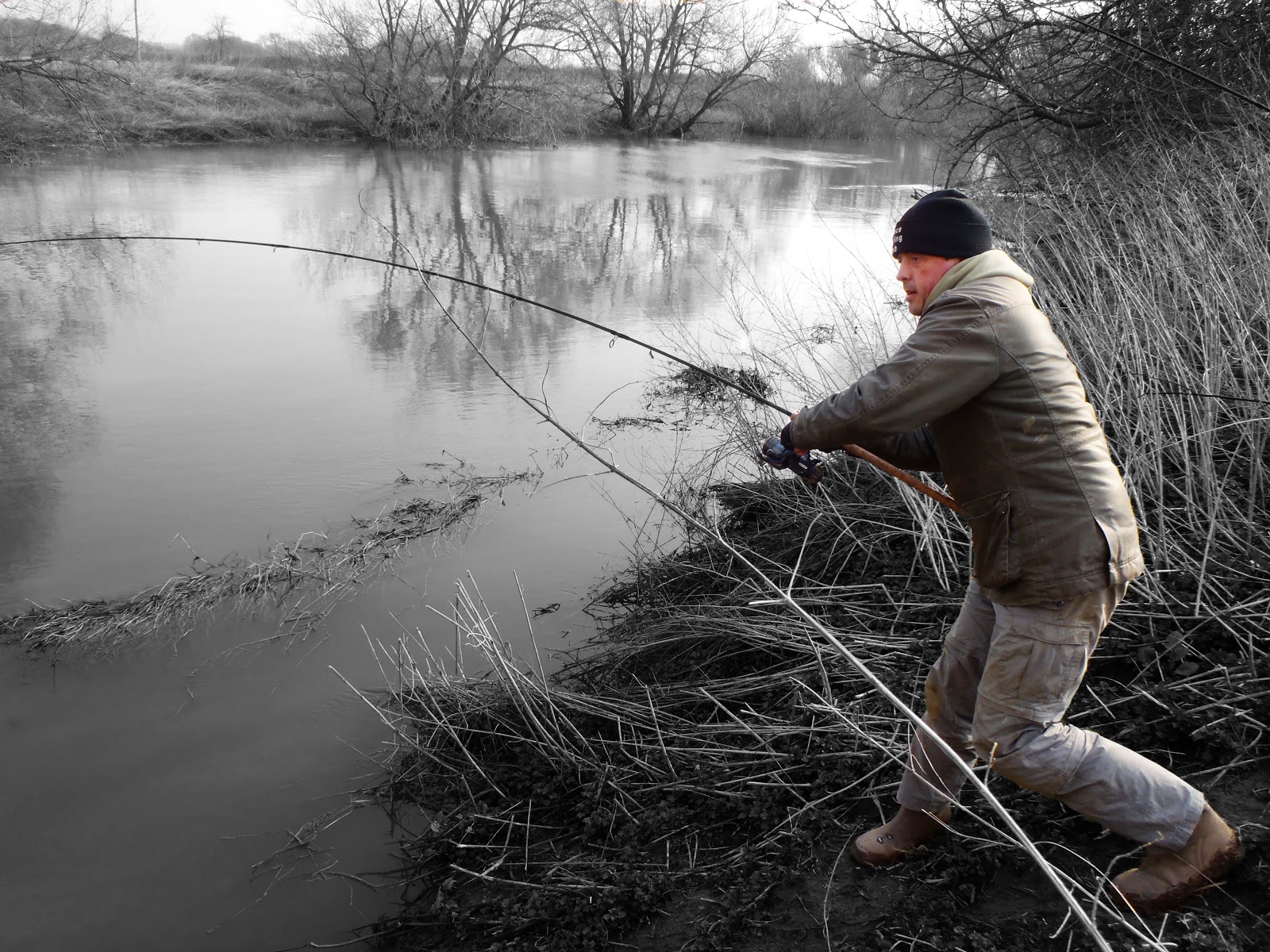 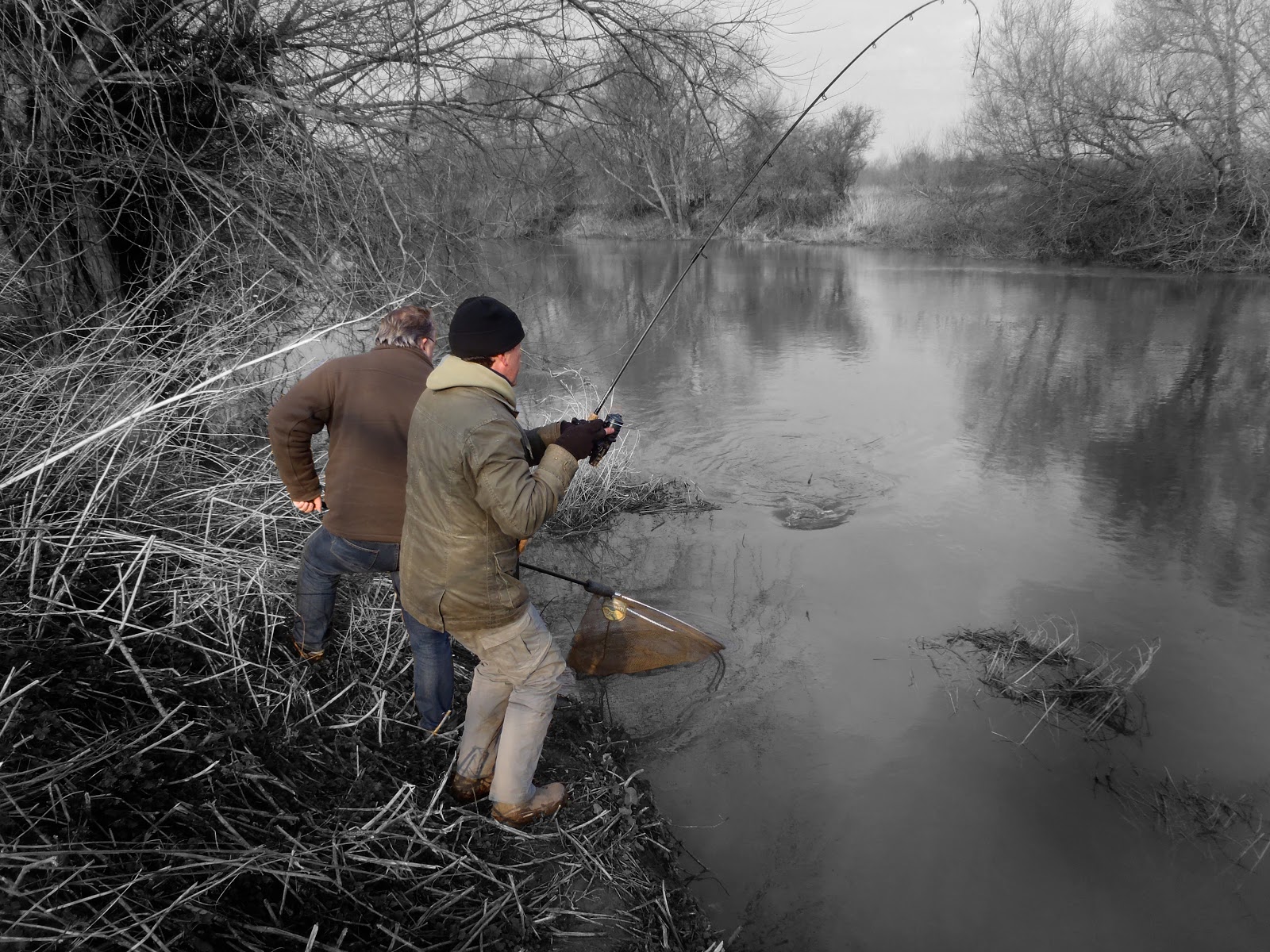 Assisted by Martin Roberts, Joe Chatterton retrieves a barbel from the Warwickshire Avon.

Wasn't big, it wasn't special, and the day was bitter, the fishing tough.

Couldn't raise a bite myself...

But, I was glad to be, on the final day of the old season.

There, and in good company.

You never know with rivers what you're gonna get. Last week I had to wait ages for it to come down to acceptable conditions and then when it was good to go was forced to fish bank-high, mucky water, within the hour. Of course I thought I'd not get back for days but next morning was amazed to find the water not only flowing moderately but perfectly coloured once more. I guess that a localised heavy downpour in the very north of the catchment had put a great deal of water in very quickly, but the ambient precipitation over its entirety had been as low as I'd experience on the bank.

Seems good theory to me. Usually heavy rain up here means a sudden influx of dirty grey water from the great swathe of asphalt that is the M6 motorway, 640,000 square metres of which drains into the river extremely efficiently and often too quickly for comfort. Imagine how much salt finds its way in during wintertime... But the rising water had been brick red which means that it originated directly from the red sandstone agricultural plough soils found a little way upstream, but from not the M6 in any great amount.

Anyways... Such perfect water meant I had to go fishing. And this time I felt I was in with half a chance of actually catching what I'd originally set out for, which was not simply fish — but data. 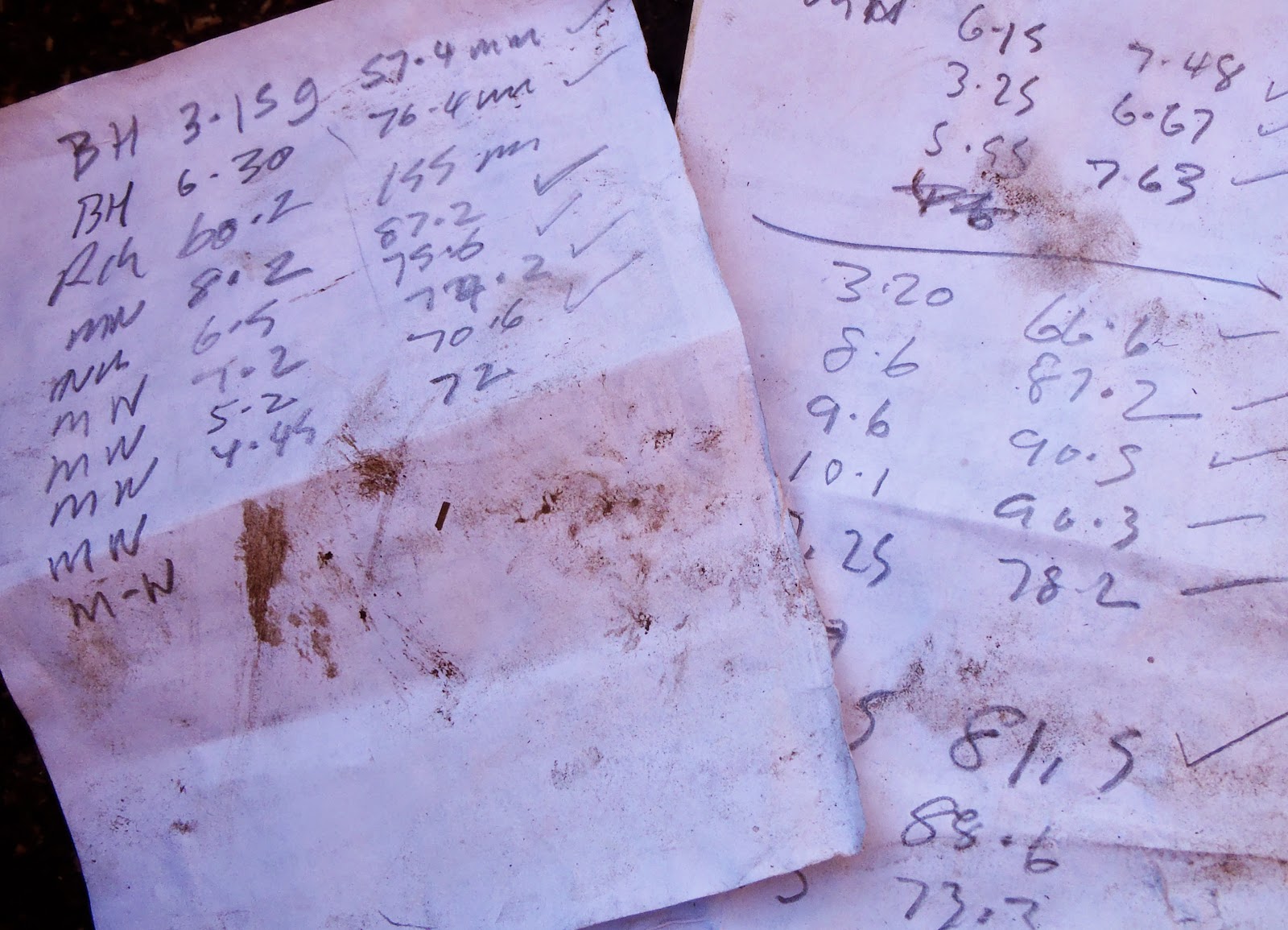 So I sat down in the serene seclusion of the dell of the pool and fished the gentle swirling eddy currents, hopeful for those gudgeon I'd originally wanted to find but content to catch minnows and bullheads if they didn't show. Because they had now become the subject of my own project — a record of them and comprehensive enough to create valid charts from.

Luckily the minnows were all too eager to feed and the jam jar was filled in short order with the first eight. Out came the quantification tackle, their vital statistics were jotted down, and they were released downstream so they wouldn't bite twice. 2 bullheads and 19 minnows were recorded in total. More than enough to flesh out the middling weight bracket for the minnow chart but very small fish were very hard to catch and none of the largest came close to the big fish I'd had on the first day who is looking to be something of a lucky capture.


What was fascinating was the weight variation between fish of near equal length. I'd never noticed it before, I mean you wouldn't, would you? A minnow is a minnow. Well, the British Standard Minnow is not the useful unit you might think it to be. The third smallest at 72mm for 4.5 grams, was just 2.2mm shorter than a fish weighing an astonishing 7.2 grams. That's an enormous difference, and I think larger than the kind of weight variation you might get between equal length cock and hen tench just prior to spawning. But minnows spawn in May and June, not February and March, so there's just a huge difference in girth between fish the year round, I guess. Come June 16th, sexing minnows will be easy because of the male's vibrant mating garb at that time. Right now it is not easy so I couldn't say whether the short and the fat, the long and the lean, were either girls or boys. 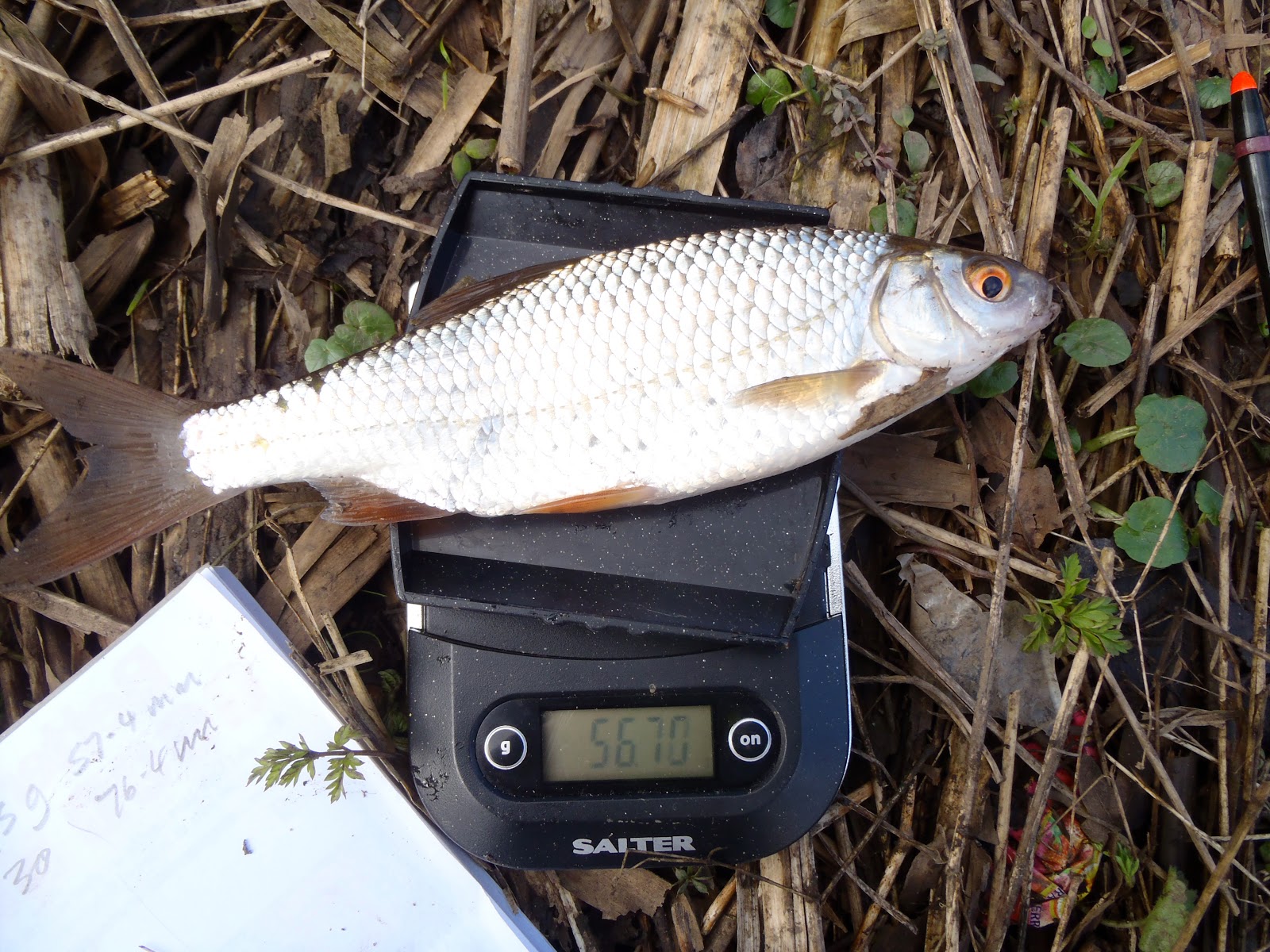 The trend line produced by the spreadsheet is polynomial. It attempts to strike a balance between all data points therefore it will change with each new addition and in time stabilise. There's no data before the smallest, between the largest and second largest, and none after. Hence the hills and valleys and without an end point as yet, the upward whip after the largest fish. The start of the curve will be very steep with almost all fish species because they grow long in the first spurt of growth but weigh relatively speaking, very little. For instance, the six-inch roach pictured above who was caught after two bullheads but before the minnows, weighed exactly two ounces. A seven incher won't weigh very much more, perhaps three ounces or maybe four. A roach of 12 inches, though, can weigh as little as a pound but as much as a pound and a half. However, a roach three times as long as that little six-inch blade will set a new British record. That is why the trend line flattens out as weight rises. As fish mature, extra inches in their skeletal length and at great size, fractions thereof, mean absolutely everything in terms of the potential weight of flesh their frame might carry.

Which brings me neatly to the British record for minnow... 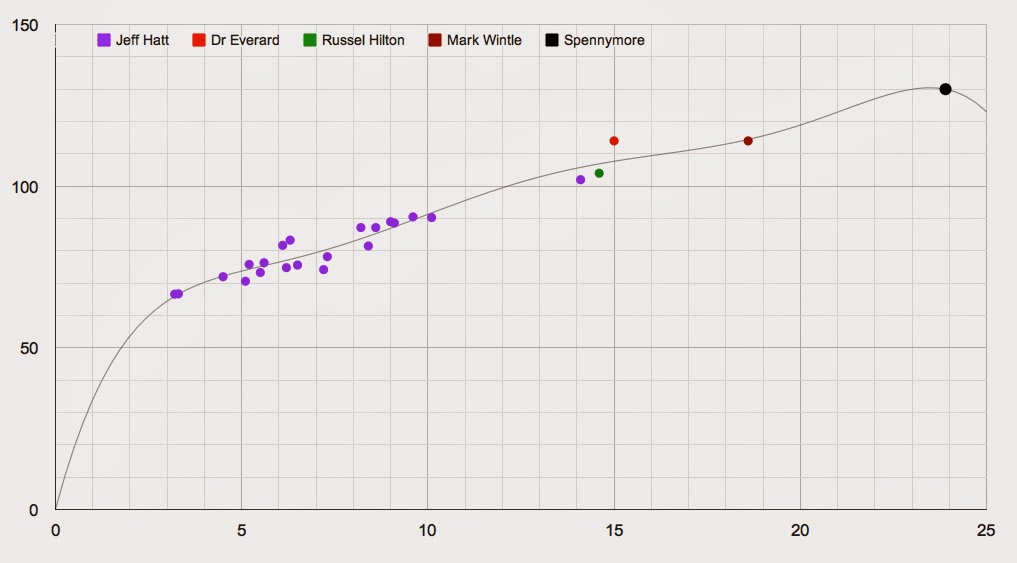 Mark Wintle has stepped in and clarified the situation. It really was 13.5 drams after all and not 13.5 grams as I (and Dr Everard) once thought. A simply huge minnow, the like of which seemed unimaginable to my boggling mind. Turns out that because of the data I've compiled so far with the addition of those fish known to have been larger than my best specimen so far, that it might be quite possible after all. Of course, Dr Everard's fish is included in the chart above, but Mark supplied a minnow of his own caught many years ago and weighed accurately on beam scales at 10.5 drams (18.6 grams) and an estimated 4.5 inches in length. The chart agrees with the accuracy of his estimation, I'd say. I've also added Russel Hilton's recent capture measured at 104mm in length but not weighed. My weight estimate for it is conservative. I don't know how fat it was but if similar in girth to my 102mm fish then it weighed approximately 14.6 grams.

The length of the Spennymore record is also an estimation. So far as I know it was never measured. However, it's not just speculation and not so great a thing to imagine now because the data set suggests that it would have been a believable, 130mm in length, not the ridiculous 170mm I first thought it had to be. The trend line won't allow it to be very much longer nor very much shorter if the fish was normal and not diseased.  I think ±10% a reasonable deviation in length from the norm at that great weight. But then again, if two near equal length small fish can differ so very much in weight then it might have been only as long as Mark's fish, but hugely fat...

These are minnows we're talking about here. A fish so commonplace and miniscule that you just can't take them seriously, can you?