You'll have to forgive my last post, I'd bought and attempted to read the Angling Times and it sent me round the bend, provoking a frothing at the mouth rabid reaction that had to be cured by purging myself.
Read More...>
Created by Jeff Hatt at Tuesday, April 28, 2009 No comments:

Midlands big small fish specialist Jeff Hatt has finally landed a fish to ruffle the feathers of the specimen angling world. Jeff's campaign for huge canal ruffe began in earnest during the winter deep freeze that had the whole country locked in its icy grip, but has now paid off with a record worrying big 'pope'! The capture of the monster fish, which fell to a maggot and caster cocktail, marks the culmination of many months of difficult fishing, plagued by nuisance roach to two pounds, in often arduous and life threatening fishing conditions on a top-secret-rock-hard Midlands venue, just up the road from Jeff's house. 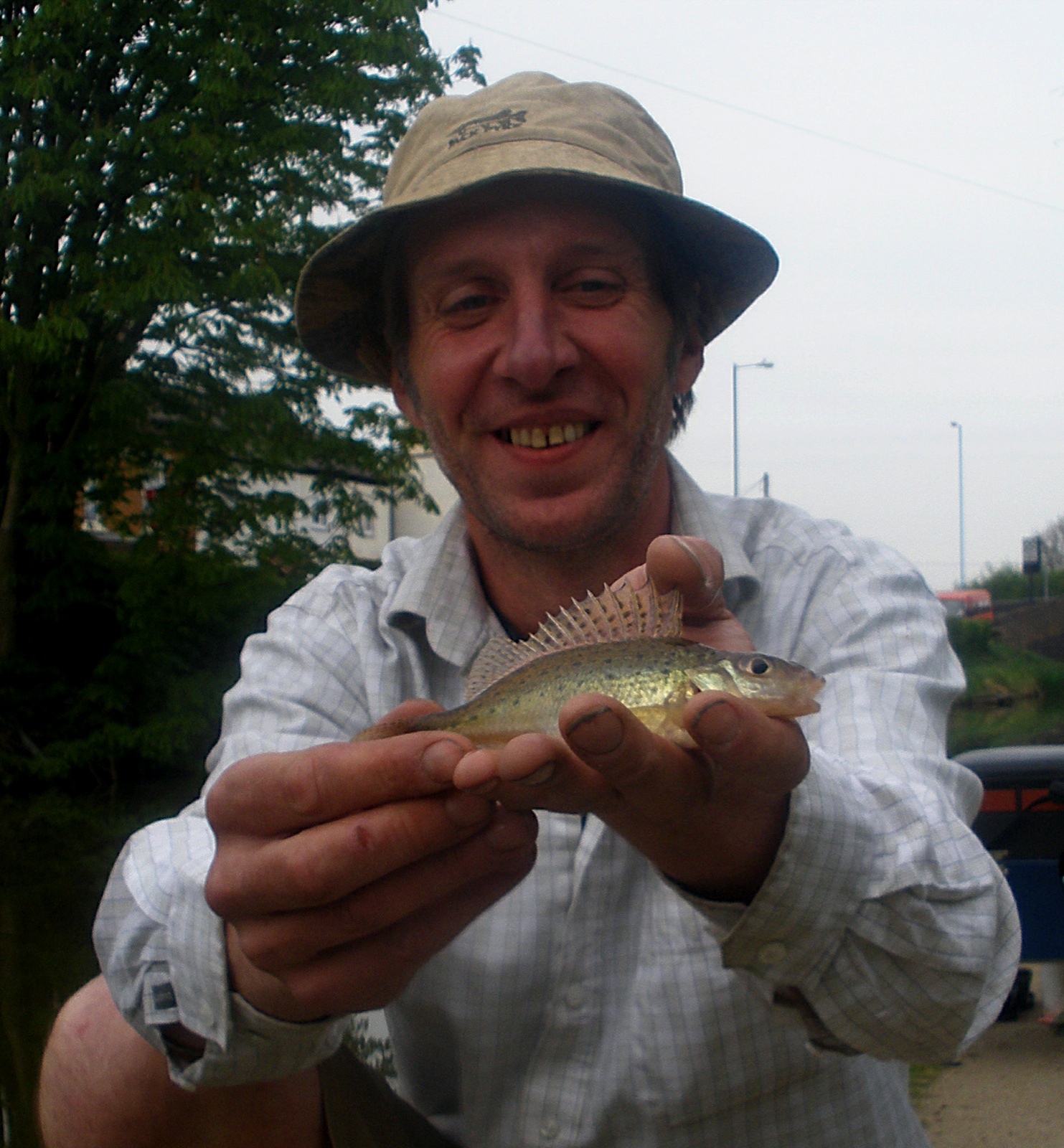 Jeff, of Longford, Coventry, who'd had a smaller ruffe earlier in the week from the same spot, spent his lunchtime fish spotting and witnessed big fish rolling by an overhanging tree. "They had to be ruffe" he said "only ruffe roll at high noon". An evening session was planned and Jeff's mate Keith invited along to partake in what Jeff knew could be an historic occasion. Both anglers cast baits over carefully baited pegs. Jeff used his own groundbait concoction consisting of Londis's finest breadcrumbs mixed with Sensas Ruffe Justice and a top secret squirt of a "commonly available household fluid".

"We'd just sat back to await unfolding events" said Keith, who then hooked and lost the first fish of the session, "It felt a biggy, probably one of the huge ruffe that Jeff had spotted at lunch time" he continued. The two friends fished on regardless, enjoying the lovely evening and the bloky banter which "had only just switched from the incidence of intersex roach to the retro-evolution of the three-spined stickleback" when Jeff's float dipped, and disappeared from view. He struck into solid resistance and after a tense ten second fight, during which the big fish made numerous darts for the safety afforded by the numerous bags of drowned kittens that litter the canal bed, numerous numbers of which were caught and released during the session, brought the exhausted specimen to hand.

The fish was carefully placed upon a Preston Innovations ZERO-GRAV Monster Tiddler Total Fish-Safe Unhooking Mat/ Weigh Sling, to avoid any unnecessary damage, and then measured carefully against the back of Jeff's hand. "It brought the scales all the way down from the tip of my middle finger to the root of my thumb" said Jeff "and that's precisely five and a half inches, give or or take a dram or two, easily the largest ruffe I've ever seen in the flesh, beating my previous personal best by a whole thumb knuckle!" The 'pope' was then 'plugged' by sticking a wine cork onto its spiny dorsal fin, a fine olde English tradition with roots running deep into the mists of time, but still practiced with due diligence by all serious ruffe anglers, and released to fight another day...

Indeed the fish is just one quarter of a thumb bone short of the current British Record caught by Ronnie 'knuckles' Jenkins in a Cumbrian Lake in 1986, a record previously held by legendary big small fish expert Dennis Flack, who at one point held no fewer than four British rod caught records at the same time, for bitterling, stickleback, bleak, and of course tommy ruffe!

"Dennis has been my mentor, hero and inspiration in the past few months" said Jeff. "everytime I got a bite and only hooked yet another pound plus roach I thought of his shining example, and when things were really tough in the ice and snow, always remembered the immortal words of Alwyne Wheeler"

'The ruffe is like a golden perch with a big head, but not quite, and much smaller, unless it's really a big-headed small golden-coloured perch of course, in which case it's a perch after all, but I've not seen the like, as yet'

Jeff kept his tackle as simple as possible "I'd been looking at using all kinds of modern super tackle, and was toying with the idea of undertaking a second degree in applied rig construction at Warwick University, thinking that only such gear and specialist knowledge could put fish on the bank for me, but due to my parlous financial situation, what with the credit crunch n'all, I had to abandon these ideas and use an old fashioned rod, reel and line attached to a hook via a float with some split shot strung up the line, and unbelievably, in today's high-pressure-high-stakes angling environment, it worked!"

The fish seriously undermines the position of the Great Ouse as Britain's premier big fish venue. "Ouse the Daddy Ruffe now !" quipped Jeff as his centre pin reel fell from his rod and into the canal, only retrieved by his plunging his arm up to the shoulder in the cold dark waters watched by a horrified, but highly amused Keith.

Asked what his ambitions were now, Jeff replied "well, now that I've probably reached the pinnacle of Modern British coarse angling with this great fish there's nowhere to go, I mean I could target big roach, but I don't have a beard, don't want one particularly, and anyway they are a bloody pest to me, so where's the fun in that?

"Quite so", said Keith " What's the point in targeting a species that the French charmingly refer to as 'the beautiful fish', but who are actually fish that hardly know, or even care! whether they are boy or girl, and then go have delinquent sex with close Cyprinid family relatives just to wind up those bearded fools who catch their bloated but thankfully sterile offspring? No thanks, retro-evolved three-spined sticklebacks are where it's at right now - a proper hard fish, for proper hard times..."

Email ThisBlogThis!Share to TwitterShare to FacebookShare to Pinterest
Labels: Ruffe

A Glass Half Empty...

I had every intention of following through with my so called 'controlled experiment' by going back to the same spot and fishing regardless of what was present. All or nothing. I set up and fished for perhaps half an hour, but unfortunately for my experiment, my trusty angler instinct had kicked in as soon as I sat down

I went up to the Lake District over the Easter weekend, for a wedding. Came back with a most vicious dose of flu that put me on my back for a few days and has left a legacy in its wake - a cough from hell that simply won't clear up

Just what I needed...more gear!

I dropped into my local Cash Converters the other day and found myself a few must haves...
Read More...>
Created by Jeff Hatt at Tuesday, April 14, 2009 4 comments:

And at last, the canal comes good!

It had to happen one day. The canals that had been the bane of my fishing life of late, would at some future time, perhaps when I found that certain 'right' spot, used the right technique and baits

It seems a long time since my last post here, not much fishing got done in the meantime, what with this and that. Time has been so tight that I decided that short sessions to the nearest possible spots were in order, so, just a short walk to the end of the road, the canal basin and whatever that spot contained.