I takes some getting used to does this commercial fishery angling, what with well stocked tackle shops on site, toilet blocks fit for a royal visit, a cup of fresh tea hand brewed by the fishery matriarch whenever you want one and often with a choice of ponds offering particular brews of species and as with Saturday's trip with Martin, single species lakes, which is something that I find very hard to get my head around.
Read More...>
Created by Jeff Hatt at Monday, May 30, 2011 5 comments:

Despite having plenty of opportunity to chase other more points-worthy species on the challenge scoreboard, silver bream have been uppermost in my mind over the past week or so and chasing them for a couple of hours around dusk every evening has been what I've been up to. And I've had a few more up to a pound in weight amongst some 'normal' bream and a welcome ten ounce roach, but nothing much larger than this year's mean (so far) of 14.75 ounces, a figure well up on last year's established mean of just 10.5 ounces, and that indicates that these fish are healthy and growing apace - 3-4 ounces per annum at an average age of perhaps four years - which is very good news for the fish and the fishery. 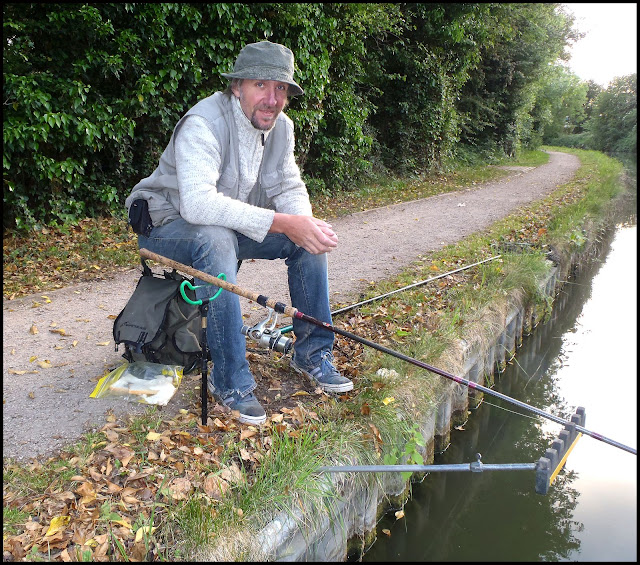 Three years of regular canal fishing have taught me that small and compact is beautiful. There's but a square yard to set up and sit in

I'm trying to fathom what makes this fish tick as they are easily the least understood of all the 'common' British coarse fish and a real challenge to the grey matter, not least because there's hardly any reliable information out there concerning them and virtually no information about how to fish for them or where to go to do so.

I've caught them through the day (not tried dawn through early morning yet) but they do like to feed in the hours approaching and around dusk when they seem to be in a state of high-excitement, freely competing for the ground-bait of mashed bread, a food item they really do seem to love. And, at that time of day, as the light falls away they move up to the shallow marginal shelf on the far bank, probably to raid the day's accumulated larder of fallen foodstuffs, caterpillars and other hapless bugs for instance, that have entered the water from the overhanging brambles. 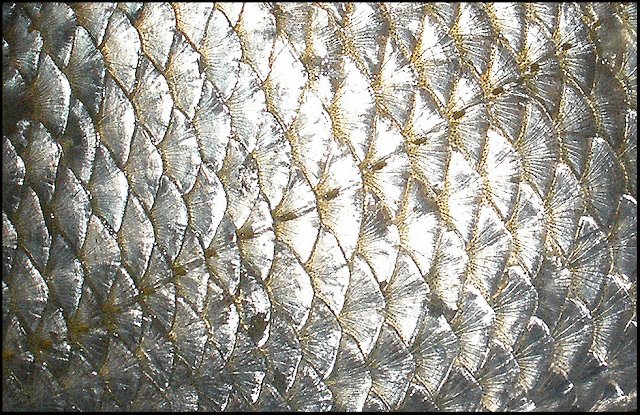 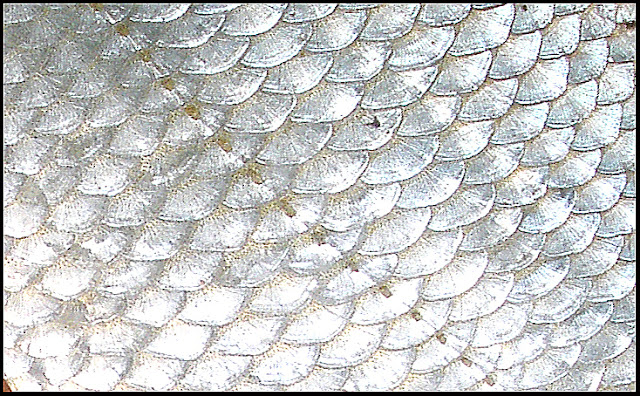 What is remarkable about silver bream caught at dusk is the amazing play light off their scales. I've heard that they're more closely related to the bleak than to the bronze bream, another fish with bright scales and a large eye. The bleak's scales contain a substance called guanine, once known by the much nicer name of 'essence d'orient', that has pearlescent qualities and was once extracted from the scales to create artificial pearls.

'The fishes are rubbed rather roughly in pure water contained in a large basin; the whole is then strained through a linen cloth, and left for several days to settle, when the water is drawn off. The sediment forms the essence of orient. It requires from 17,000 to 18,000 fish to obtain about a pound of this substance.'

I don't know if the silver breams scales contain essence d'orient too but the scales are extremely reflective, picking up and glowing with light that you'd swear wasn't even there! This is mirror camouflage at the peak of perfection. Also, I noticed that last night's single specimen had a belly tinged with vermillion around the fins and the vent, a detail I had not noticed before - perhaps it's some kind of mating plumage? 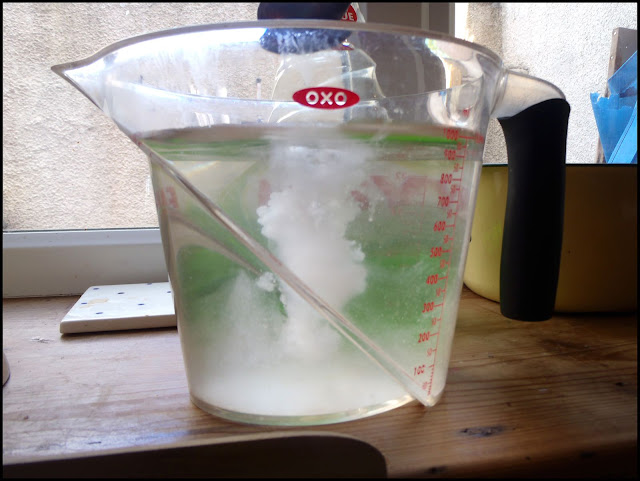 A teaspoon of bread milk in a litre of water

That they love bread is no surprise either, as so much of the stuff is chucked in locally that even the waterfowl refuse it at peak duck feeding times, the excess floating about and eventually sinking into fish range. I could feed liquidised bread of course but the mashed bread with its larger particles seems to be working extremely well, not least, I suspect, because mashed bread also carries an advantage over liquidised bread (when used in a canal) in the form of an extremely fine cloud of bread 'milk' that very slowly sinks and hits the bottom where it spreads out into the water as a powerful attractant, aided in its spread throughout the water column by the attentions of fish.

If recent results are anything to go by, you can set your watch by it. Ball in one or two slices of bread mashed to a pulp in canal water and within three quarters of an hour or less I have usually had fish in the swim, their presence signaled by erratic sideways movements of the float as they brush against the line, which in most cases results in a true bite within five minutes, and often less. This ritual has taken place every evening this week, so it cant be coincidental.

Tonight, I intend to broaden the approach by adopting a roving aspect, something akin to upper river chub fishing where you bait a series of consecutive swims and then go back to the start and fish them one by one, taking a fish or two from each if they have responded to the feed, and moving swiftly along to the next if no indications have come within ten minutes or so.

It's interesting to note that after catching three PB tench on successive trips that my interest in catching an even bigger tench has vanished. I went out after one, of course I did, but on the bank I found myself scanning the horizon for signs of bream, of all things. I set up and cast out only to sit down and find myself wondering what it was that a big bream might like

Silver Bream - Seeking Silver - Another Piece of the Puzzle

At this time of year many British anglers interested in catching very big coarse fish are trying terribly hard right now to catch the females of certain species as they fatten and fill with spawn. Some fish have already shot their load: perch did it in April and I know that the canal bream have already done their thing, but silver bream....

A 3.30 am start is no big deal for any normal angler but, through lack of a nightcap (Judy has suddenly banned alcoholic beverages from the household, Monday through Thursday...) my occasional insomniac tendencies kicked in, and so I managed about ten minutes of cat-napping in an attempted three hour stint of sleep, eventually resigning myself to the waste of energy trying to sleep had become around two thirty and getting up earlier than planned to enjoy farting about with my bait and tackle over a steaming mug of tea.

Gravel Pit Tench - Ever So Big

Gravel pits - I haven't fished one in years. I grew up fishing an old style pit complex in Essex, originally exploiting the ancient Thames gravel terraces, gravels laid down since the last ice age that from time to time throw up elephant and hippo bones and also flint handaxes fashioned half a million years ago by our distant ancestors of the lower Paleolithic. I have one myself in fact, found in the Ravensbourne, a very minor Lower Thames tributary.

below is a spreadsheet I've come up with to explain what is happening with our challenge and how things might well pan out in the future. There are three competitors listed here, the top three as things stand right now, and that's Keith, myself and Danny. The scores are expressed as an advantage/disadvantage with regards to the entire field rather than as a points total over the nearest rival as that is neither here nor there at the moment, and simply shows who has worked hard/struck lucky.
Read More...>
Created by Jeff Hatt at Thursday, May 05, 2011 4 comments:

Big fish are my passion and the bigger they are, the more I enjoy them. That's not to suggest for a moment that I don't enjoy catching small fish because I do, just so long as they are pointing at something larger to come but when the times arrives when it is clear that a water will not be throwing up any more surprises in terms of ever larger specimens then my enthusiasm wanes away to nothing. Quickly.
Read More...>
Created by Jeff Hatt at Sunday, May 01, 2011 5 comments: