For those not yet aware of the above competition, Russel Hilton put forward the idea to George Burton that it might be a good idea to run something along the lines of those challenges the Coventry lads used to take part in some years back now. They were good fun, let me tell you. I made a lot of good friends because of them and so I guess did everyone else. The two I enjoyed the most were the percentage of record weight challenge; a simple idea but one that drove everyone involved to break multiple personal bests. Such was the drive to get out and do well that I broke eight, and bettered some of those over and over, once three times in the same day with consecutive crucians!

The second was the earlier challenge where a handful of us set out to achieve the record weight with multiple captures, so a fifteen pound tench would require an easily achievable four or five middling fish in the same session, yet a record weight zander would require the almost impossible task of two doubles in the same day, three 7 pounders, 5 and a half 4 pounders, or a very big catch of schoolies. No one achieved even half the total catch required to match the record for that particular species. Nevertheless, we all gave it our best.

Russel and George consulted me about their ideas. Of course, I got involved up to the hilt in its creation because I was really interested in the split between venue types and what that might mean in terms of competitive advantage and handicap. So, tench for instance (and all species, of course) are split between canal, river/drain, and stillwater with scores for each — one point for every percentage point of the record — and an aggregate overall total score

Of course, still water captures are going dominate the gross points for that species but catch a single river tench and any advantage gained by someone camping out for a really big fish at a lake will be reduced substantially but then go catch a canal specimen too and it might be brought to nought. I like that dynamic. It is a leveller of advantages and a punisher of lazinesses.

My favourite dynamic, though, is the ten point bonus for largest fish of each species in each category. So, if two competitors are fighting the tench corner and one gets largest still water fish but the other gets largest canal and river fish, then not only is the points advantage gained by a really huge still water specimen reduced, but the second competitor may actually win the tench category outright on a lesser percentage points total but greater bonus points.

To be honest I don't quite know what the bonus system might produce. Without prior experience who could? But I do like the idea of a wild card that can make or break things, and especially during the end game of the competition when things can tend toward stalemate with a clear winner and his runners up emerging long before close of play.

With ten points available here and there and everywhere across the board then things should become very interesting indeed at that time. Early on, a mere ten points is nowhere near the 50 to 70 that can be gained by catching a very large specimen. But late on it's very hard to make an extra ounce over or even under other captures. When only one or two point advantages can be gained for beating someone by an ounce or two, ten can be gained by adventurous fishing in another more trying category and nailing best fish!

The leader board sheet of the spreadsheet computes all the scores, adds and subtracts bonus points automatically too, and all from simple weight data entered by competitors. There's leader boards for all the venue types as well, so no doubt there will be sub-competitions going on.

From prior experience I know I'll never become overall champion

I wouldn't mind that at all.


There's eleven anglers already signed up and raring to go come Mayday. So, if you're interested in becoming involved too, then find out more and get in touch with Russel, here ~

Of course we had to go back for one last chance before the perch, the female kind of whom last time out were as fat as feck and venting eggs, finally popped their corks and went all size zero on us.

The weather was remarkably similar to that of the previous trip and the pattern of bites very much the same, but after enduring carp after carp after carp, finally a proper perch, or something very like one, was on the bank, and a very big one too... 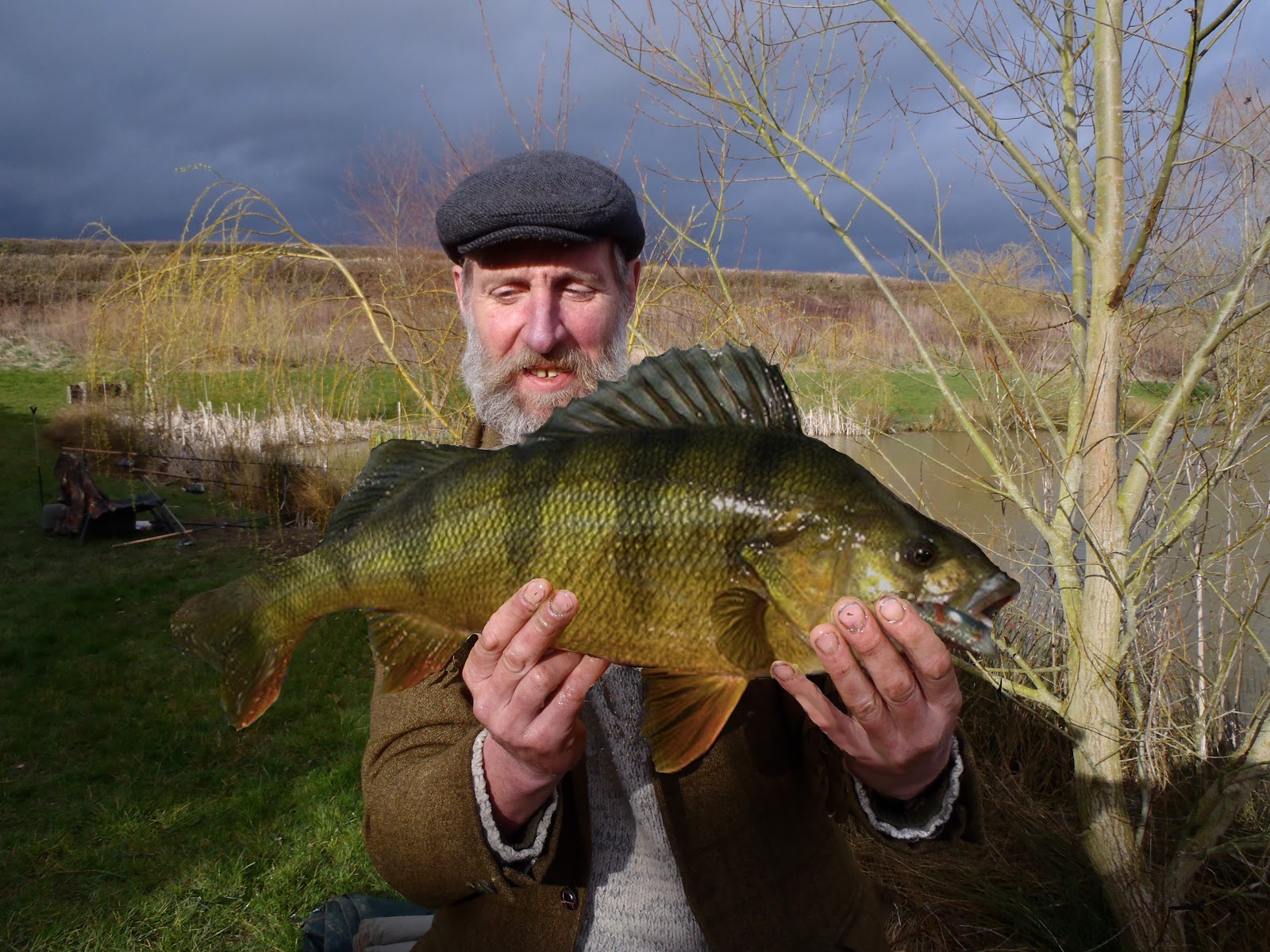 We weren't at all sure, though. It just didn't look quite 'right' in the hand. Nevertheless, I was sincerely hoping for a PB so when I got home I made a hopeful phone call to a fellow I know — highly regarded as an expert in these matters — who to my crushing disappointment informed me that what I had wasn't a true perch at all but actually a very rare hybrid know to the French as 'Poisson d’avril'.

He didn't say what it was hybridised with, exactly, but intimated that the rogue parent may have been something going by the Latin name of Summus testiculis...

I tell you, I felt a proper nana. All that way, a fiver worse off, and all I had to show for it was a sore arse, an aching arm, and a prize lemon...

Now a real perch of such enormity should be available to anyone. They are hard to find, of course, but not at all hard to catch and require no particular skill, no great finesse, and little in the way of specialised approaches. Fishing a commercial pool for them is about the simplest style of fishing it's possible to imagine. A float, a large hook, some shot and a worm or prawn fished on the bottom is what just about everybody rigs up with. They'll place the bait in the margins, spread a little ground bait around the spot, perhaps chopped prawn or worm with a handful of maggots too, and then sit back to wait.

That's what I do. Yet I don't catch large perch. Everyone else does though, and they do it with comparative ease. Why should this be? How can it be?

You have to understand that I have caught just as many perch as my friends have, so the likelihood of a large one turning up from time to time on my hook should have been equal. However, that has not been the case. None have.

I don't have the same problem with Barbel, for instance. If I sit down at a river and cast a bait after them  then it's very likely I'll catch one around double figures if I catch one that day. I rarely catch barbel because I rarely fish for them but when I do then small fish are not my lot. Big fish are. I simply don't have any trouble catching them, never have, and so I'm confident that I will.

Now, imagine that you come barbel fishing with me and catch small fish around the four to six pound mark on a regular basis but none larger, yet I frequently catch much larger fish than that and often over double figures. Now imagine that situation persisting year in, year out, and occurring every single time we go after barbel. There's no difference in our baits, no difference in the way we fish those baits, and we swap and chop swims with each other to even out the chances. That's how my perch situation stands today.

It is simply inexplicable. But the statistics are phenomenal. I reckon I may have caught a hundred or more around the pound and a half mark now. I stopped counting years ago. It may be far more. Of course my friends have also caught plenty of fish the same size but less than I have because one in every three of their captures over the pound mark will be a 2lb fish and one in every ten, 3lbs or more. 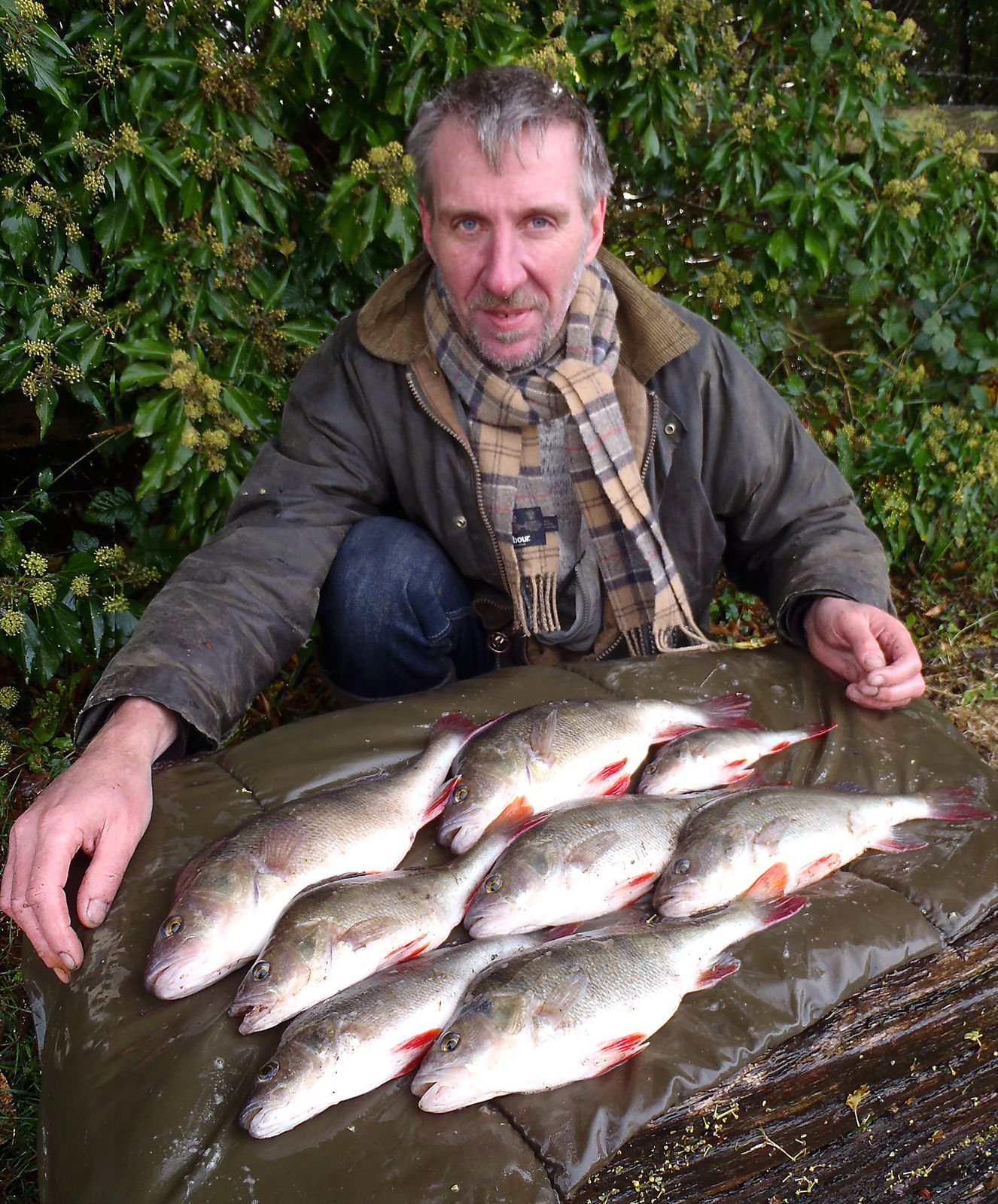 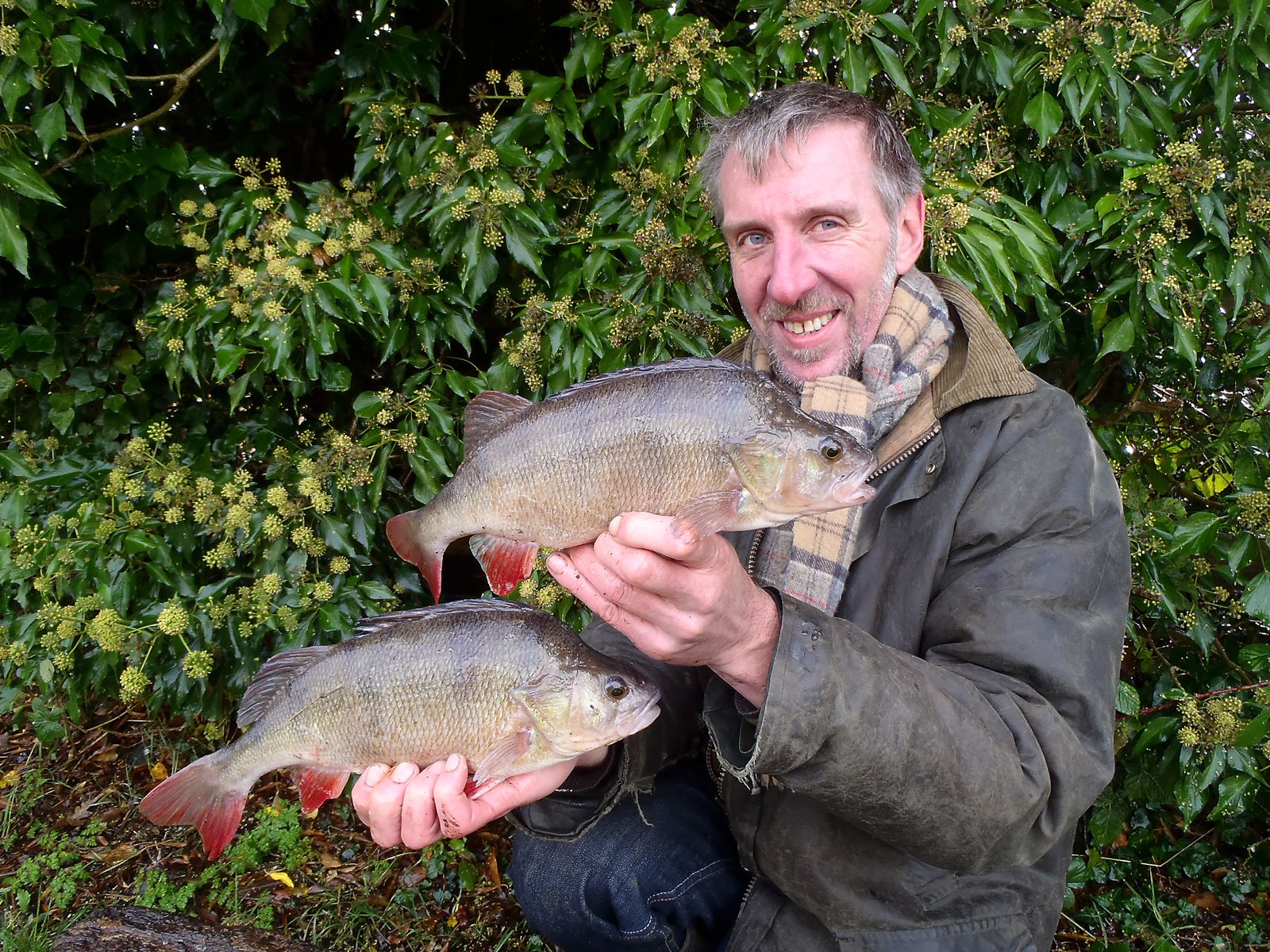 I don't know what it is. Perhaps a slight difference in bait placement. A gnats cock of patience I don't possess that they do. Maybe big perch smell the taint of tobacco, but that can't be true because Danny Everitt was a smoker when he caught a four pounder a few years ago. and I was there when he had a three from the same venue the year after. And don't be fooled into thinking that the pictures above are those of my own solo efforts. Knowing of my glass ceiling and feeling it his duty to help me break through it, Danny kindly escorted me to one of his best canal perch swims and there instructed me how to fish it. I followed his commands to the tee. That fine net of fish is Danny's usual fare, not mine. In fact it was well below his expectations...

If I'd gone alone I'd have not caught the two-pounders, only the smaller ones, I swear!

Is it simply a confidence thing, then? Well', I don't fish for perch without confidence because I know for certain that I will catch them. I don't lack confidence in my ability to catch large ones either because I know enough about numbers to understand that given time large fish will fall because, as I have said, there's no great skill in it and large perch are just as wise as their smaller brethren, which is not very. Predatory fish do not require wisdom, nor do they seem to acquire it. They are not prey.

Roach? Well yes. Big roach are clever fish who grow large by taking up position in the centre of the shoal using their smaller flanking shoal mates as protection against perch and pike. They are wary in the extreme. Perch shoals, though, are harrying mobs who chase and corral prey quite oblivious to the fact that they themselves might be quarry too...

They are hunted by us. But they don't know that. At least that's true in your case.

But they certainly seem to know when I'm on the prowl!