If there's one thing about living right by a canal full of zander that I consider a great bonus then it isn't that I can go catch loads of them at a moments notice, but that I can go experiment with hooks and rigs and baits and what not without incurring overheads. If you have to travel far and then pay for the privilege of fishing for them, then understandably you'll just want to catch if you can and will choose the most reliable method known even if its success rate is actually horribly low. Experiments cannot be afforded.

I don't have to worry about all that. My greatest cost is that of half a slice of bread with which to catch skimmers for my bait...

The picture above is the skull of Perca fluviatilis, the European perch. It is well worth studying if you are a predator angler because this skull is the typical one of the Perciformes. All members of this huge order of fishes have similar skulls, or at least all members have the same bones in the same configuration with the same linkages between articulated jaw parts but with often very large differences in skull morphology. Marlins and sailfishes, for instance, are Perciforme but so are ruffe and sand eels. It's difficult to imagine that such vastly different fish are related at all, let alone that they all share a common ancestor. But they do.

There's just thirty or so Perciformes swimming in British waters but only a handful that attract the attention of anglers both as quarry and as bait (and often as bait for another Perciforme!). There's perch (of course), ruffe, bass, mackerel, the various sea breams, sand eels, wrasse, and the subject of this article, zander.

You'll notice the absence of pike. Pike are not Perciforme but Esociforme; a very small order of fishes that includes just two families — the pikes/pickerels, and mudminnows. By contrast, the Perciformes comprise of 160 families, 10.000 species, represent an astonishing 41% of all bony fish and are the largest order of all those animals with articulated spines like us — the vertebrates.

On the one hand we have a narrowly specialised order that evolved many millions of years ago to exploit very particular niches and have remained almost unaltered since. On the other we have a burgeoning explosion of species each of whom evolved to exploit particular niches amongst a myriad of alternative situations and no doubt continue to do so to this very day.

The Perciformes are, by any definition, one of the most successful orders of animals that ever populated this planet.

You wouldn't fish for large perch with pike tackle and even if they grew to double figures you still wouldn't, and that's because perch fishing and pike fishing diverged centuries ago.


Our approach to zander, though, has yet to split fully away and develop in its own right and so it remains tightly bound to pike fishing practises because the history of zander fishing is so very brief, sprouts from pike fishing in the first instance, and is yet to evolve into a separate and distinct branch of the sport.

Standard pike fishing dead-baiting approaches applied to zander are not appropriate. The only thing they share in common is that they both eat fish...

The Coventry posse established that many moons ago when just about every blogger about these parts was fishing for them but experiencing disastrous returns on (admittedly small) investment with treble hooks. So we were driven to explain why so many runs were missed without the least indication that a fish was there in the first place, when a thud was felt it might drop off a few seconds later, and when a fish seemed well hooked then one in every two (or three) might shed the hook mid-fight or at the net. 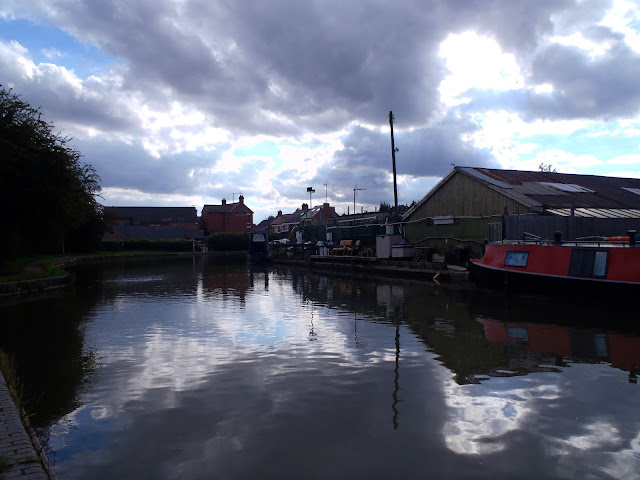 Because the canals are very easy for us all to reach and therefore we could experiment at will, within a year answers were forthcoming. It was found that the mouth of a zander was the entire problem. It just has so little flesh in it that standard treble hooks could not cope. Even in large sizes the three individual hooks were still small and worse, the hook was impaled in the back of a bait and could not turn. So they'd just skate off the bone and only find a hold by accident.

The answer was mostly a hook size and bait size thing. Small slices of fish lightly pricked through the flimsiest piece of skin by single hooks were found to be successful. And these hooks had to be large ones to work best. Sizes in the order of 2 - 2/0 were about right. This approach brought our zander fishing into the realms of normality where loss rates of 20- 30% were acceptable. And then acquired skills might improve it further.

Missed runs were fewer and fewer between, bumped fish far less of a problem, and it soon became apparent when on occasion five, six or seven runs on the trot were fluffed then it was a pack of very, very small fish that were the culprits.

When I tried an established bass (a perciforme) hook in size 2/0 under a float I found that I'd hook zander always through the void behind the jaw and experience 80% success or greater with them.

But I'm one of those who believe loss rates should not be incurred at greater than 5% for any kind of fishing, be it barbel, roach, or great white shark... 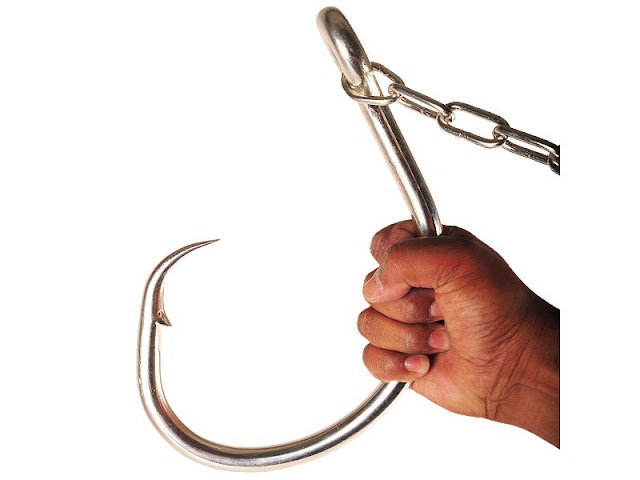 I assure you, the picture above is no advertising gimmick. That is a real hook — the 'Mustad 39937NP-DT Giant Demon Perfect Circle Hook' — and one that will set back the big game shark hunter wanting mako, hammerhead, bull, tiger and great white on his personal best list, circa £150.

God Forbid they should ever lose one!

It illustrates perfectly what a circle hook is and what a circle hook does. Imagine that a great white hits a bait and takes it down the throat along with this hook. The point is set at an angle of 90 degrees to the shank and there's a six inch gap between. Because the point is facing in this direction it cannot easily catch on anything unless it hits something to turn around. So the hook is drawn out of the smooth gullet and back into the cavernous mouth where steady tension brings it to the closed jaw. Because the line is pulled against a very large float, the shark's forward motion draws it into the very corner where both jaws meet when it turns and catches around one of them. Against a float that would be the top jaw most likely.

But it only pricks. The fight is what makes it penetrate because there is no striking necessary, in fact that would be a mistake because unless the line is pulled backwards it won't come to the scissors of the jaw as it should.

I draw your attention back to the six inch gap. That's critical. Should a shark with a jaw thickness much, much greater than six inches take the bait (imagine that!) then it's not going to work very well unless it finds thick flesh and Mustad are just going have to create an even more preposterous hook!

But sharks have rubbery mouths. Zander bony ones...

Imagine we take a more reasonable sized circle hook, say a size 2/0, and then try to hook it up to various gauges of metal piping. It can only be hooked fully around pipes with exactly the same gauge of the entire gap or less because the metal is not going to give at all.

But when a circle hook meets up with a (less than impenetrable) jawbone and wraps round it then the point will be driven in gradually by force. Not very far, but enough. And when they lock up there's nothing a fish can do to shed them. The barb is quite unnecessary, in fact. Once coiled around the jaw they just don't fall out of their own accord, in fact you can slacken off if you like. Take a tea break and let a shark do what it will for a few minutes!

When used for more reasonable predators such as pike and zander then the same principles apply. I've trialled them recently and can report 100% success thus far. Well, 100% percent success after remembering not to strike as I did with the first two runs under a float when I dragged the hook out in error. Since then I've banked five fish by them (3 zander, 2 pike) without any trouble at all. 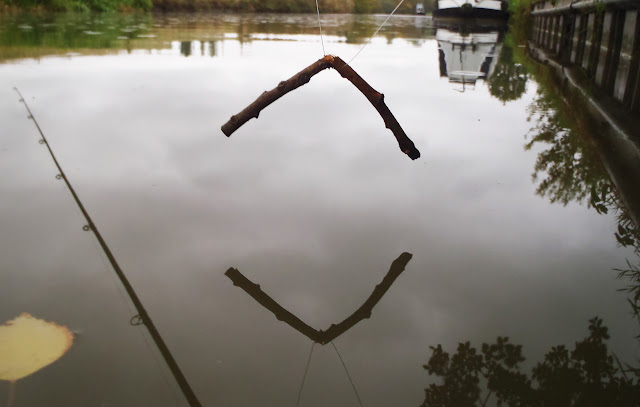 The last zander was taken by a further experimental approach. I'd gone perching down the cut but had a rod made up in the quiver that I'd used on the river a few days prior to the session. It was a simple running ledger rig with a two-ounce lead and a size 1 circle hook. I had an idea.

What if I put out that rig, hung a stick off the line as a bobbin creating time enough for the bait to enter the mouth without resistance, and just let any fish that took the bait drag the rod in? My theory was that the circle would be taken to the scissors by the weight of the lead because the fish would always be swimming directly away from it whatever direction it went. Then the hook would prick as the line was pulled tight to the rod top. And all I had to do then was pick up the rod and wind the fish in.

I never saw the bobbin rise. I was fully focussed on the perch float and only noticed the bite when the rod began inching toward the water.

Because it swam off above a lead, then of course the fish was hooked in the bottom jaw but did not actually penetrate flesh. It was coiled around it but locked fast anyhow because the point buried in the bone and tension did not allow the hold to fail. I wonder now if I should keep going with the lead approach but also try another variation on the theme on a second rod?

What if I use a large float...

And I think it will have to be one so very bulbous in order to create two ounces of drag that it makes me look like a bleeding idiot for using it!

Might that work better ensuring that the hook can always embrace the void?

I have no shame. I'll try anything once...