In anticipation of a weekend session on the Avon after a fat dace or two, early Friday morning I took a stroll to Tusses Tackle for a pint of maggots. This walk takes me across a set-aside arable field whose ruts and ditches were now full of standing water; evidently the overnight rain was far heavier than I'd thought it to be.
At the far end of the field runs a small stream that bores under the M6, fills Wyken Slough and then joins the Sowe a mile and a half further downstream, therefore it feeds the the Avon and is an indicator of expected water levels in the main river. The water was high and coloured, Saturday was out of the question then, but I thought levels would be well down by Sunday morning, and could be just perfectly so by the afternoon.

The ominous roar of raging water gliding across the weir and smashing into the mill pool was the first thing that I heard upon exiting the car. The river was still in spate. Oh crap...! 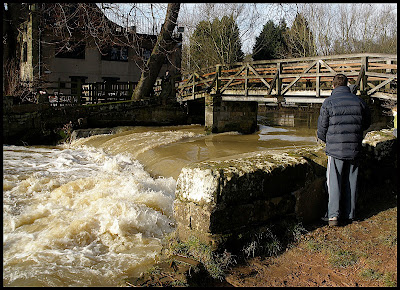 How I had underestimated the levels so badly I don't rightly know - I had always used the little tributaries around my way to indicate water levels far downstream and have always been spot on, till now. Sure enough, the water everywhere was high, turbulent and dirty, and I just knew that fishing was going to be very hard work indeed. 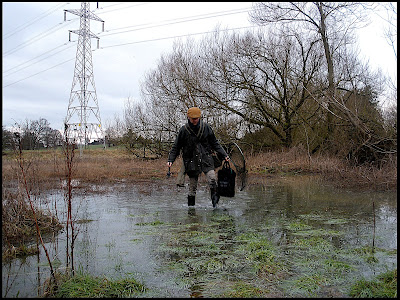 The water had certainly fallen from its peak height but was still over the banks in places; I had to trudge through the mire to find fishable swims. A hard time was had just finding water quiet enough to fish without going too heavy for comfort; the whole stretch is deep and relatively narrow here and so the water pushes through as a solid bank to bank force, with few areas of respite, but after hopping from swim to swim for hours on end without a single bite to show for the effort I finally found an area, a shallow micro eddy right under the near bank that had formed behind some sunken reeds, that if not full of fish, was not so full of debris. I cast a flake into it... 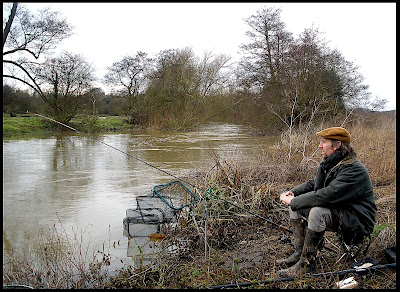 I had a very powerful bite almost as soon as I'd settled which resulted in what at first appeared to be a specimen dace, but who on closer examination turned out to be nothing but a cheeky imposter - a pale finned silvery chublet doing an passable impersonation of one - the little rascal. I then had a tiny, tiny roach, a real dace, and finally another little redfin. 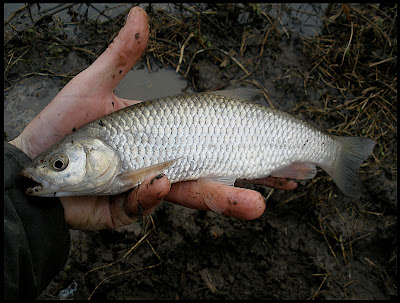 I really should have stayed put, but had moved so often throughout the day that I had ants in my pants. Fish were now feeding so I moved again, reckoning that I knew of a better place still, a place where I had a chance of a net full by dark. Of course I suffered for my impatience, it was from thereon in, a right royal waste of time...
Created by Jeff Hatt at Monday, January 25, 2010