Canal Zander — A Lot and Not a Jot

James Denison came up to Coventry on Thursday. Not for a chance at a monster specimen but for the chance of setting a new personal best for zander above that of his one and only lifetime catch of the species at 2lb 8oz. Now that's dedication in my book, and considering James lives an hour or so from Bury Hill where he could go straight out and catch a 'double' for the price of a day ticket but without having to undergo the pain of learning things the hard way, I think, admirable.

I really didn't think he would have to learn things the hard way here with me on the Coventry Canal.

Three years ago I'd thrashed out my way with these seemingly impossible creatures. Run after run, missed, hooked and bumped, with twelve takes per hour during the most furious sessions resulting in perhaps a single fish banked, three lost but the rest never even pricked. That was how it was. Really tough, infuriating, and all of of the time, bamboozling.

As with all things, though, once enough mistakes are made and trials are no longer such great errors, an answer is imminent and when it finally arrived was not only astonishingly simple, but stupefyingly obvious...

From our meet at the train station we set off straight to Lanes tackle shop to stock up on bait and then across the city centre to the canal basin where we'd begin our day long, five mile jaunt to my manor in the North — Longford.

Within a half-mile and a few exploratory casts in likely looking places it was obvious that sunny bright weather over the clear water conditions found near the city were not exactly ideal, so I suggested a straight line hop up the Foleshill Road, cutting out a two mile loop, and then rejoining the canal at the old Courtaulds factory site where I knew the water would be coloured by increased boat traffic.

It was, but still we watched motionless floats and it didn't seem they'd move all day long should we stick around that place, and so I then suggested we walk straight to Longford Junction just a minute's walk from my home and fish where I could guarantee James the positive chance of a run or two from our chosen fish.

I chose a moored boat casting two small slices of roach tight against the hull, both anchored to the floor with half an ounce of weight, both on large single hooks, and with the line sunken to stop tow pulling the bait so much as an inch out of its own scent trail. My long experience of this local water and its zander populations said this approach would work just as well now as it always had before....

James allowed his whole sprat baits mounted on paired treble hooks to drift about into open water suspended off bottom a few inches over the shelf but as much as three feet when over the boat track. Without any successful experience of using sea fish as bait, whole fish as bait, or allowing any bait to drift (but plenty of headbanging failures due to mounting bait on treble hooks to my credit) I hadn't a clue if his strategy would work... was pretty sure it couldn't... but was very interested to see if it might!

After an hour of us lolling about on the towpath in the surprising warmth of the autumn sun, at last my float twitched, lurched and then rode steadily toward the darkness beneath the boat. A zander, but about as small a specimen as can be caught on even the small sized slice of roach I typically use.

Five minutes later the float was off again.


Not surprisingly, with two runs within a few minutes to one rod after hours of absolute inactivity to all four, James altered his approach accordingly, fining down to slim pencil floats, using a pair of my pattern of single hook and small pieces of sliced roach hung off them by a sliver of skin. Our rigs were to all intents and purposes, identical now.

Moving along to another moored boat and casting tight to it, within no time his float was toodling off too...

But the strike failed to hook up. Damnit!

Bites did not return at Longford and so for a last chance I suggested yet another move and to one of my very best banker swims on the local canals. A place almost guaranteed to produce runs whatever the conditions, day or night, I was certain that if James would have any luck today then it had to be there.

Amazingly, despite deploying the same rigs and baits and without any crucial difference either of us could fathom, it wasn't to be. Puzzlingly, James' baits went utterly ignored.

Meanwhile I had a very short dropped run, immediately cast straight back to the same square yard where it was picked up again, dropped again, cast back again, and finally picked up good and proper resulting in the hooking of a very good fish indeed. Shame it got off the hook, as they tend to do!

Shame about that big oily boil of water too. Only a very big fish could have produced that... 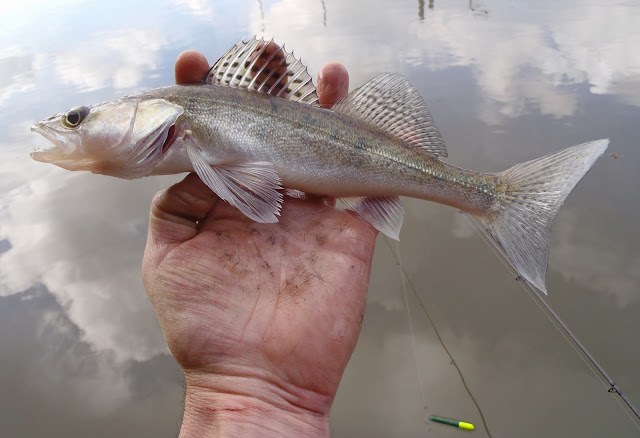 And then the other rod was off but in came a fish at the opposite extreme of scale and identical to the baby caught earlier on.

I'd had my fun. I'd far rather things had been the other way around, though. James with all the action, myself the onlooker.

What do I care if I don't catch zander today? Living so close by I'll come fish at precisely twenty two minutes and thirty nine seconds past three on Halloween morning. Should I choose. I'll bring along a china mugful of steaming tea, a bacon sarnie on a plate and consume them red hot whilst I watch my floats. If I like.

Blimey, I'll up sticks, go home for an extra sugar and a dollop of seasoning, bung the rods fully made up in the front yard, stir the tea, spread the mustard, then return to resume fishing with the snack still piping (and I have done before!) but James travels all this way, has to take what comes at some expense and then must return home exhausted at the end of a very long day, but with nothing but the experience of watching someone else catch what he came for, to show for it.

I don't know how these things work. We were fishing every which way the same by half way through the day. Maybe the only difference in the end was it mattering a lot and not a jot.