A Shed for All Seasons — Let The Toolery Begin

Jointed, made up, long and true.

Trimmed and offered up to what I judge by eye to be right height, pilot drilled through at two-thirds length. Fine masonry bit plunges through wood, pebbledash, render, biting into brick beneath. Large masonry bit chucked, hole drilled, hole plugged, length screwed in place at a dangle.

Ten plugs in and the wall plate fixed.

Sit a long, long while to contemplate this. 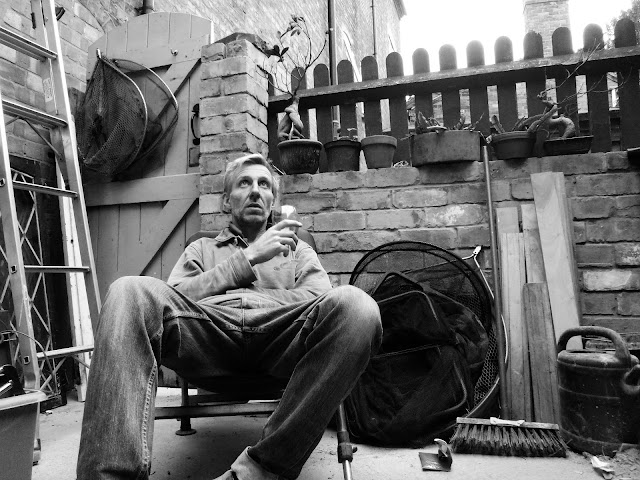 Bottle of nose-bluingly cheap but effectively sobering where thought about quantity of materials needed and where to secure said is concerned, Spanish plonk later...

In stock.
Out of stock. 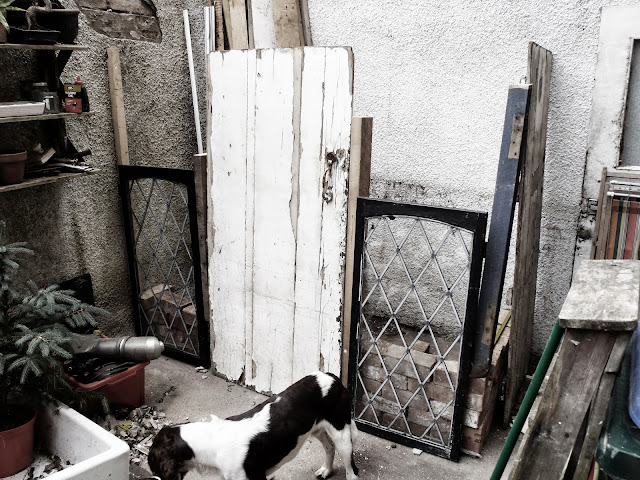 Undeterred by shortfall in necessary materials and readies to buy said in, set to work next day on mission to source and acquire entire deficient requirement by 'alternative' means.

Within no time have a pile of lumbers of various length and scantling gotten from skips parked around the village of Longford. Looks enough for job.

Permanent skip used by a local window fitter provides three almost undamaged panes of early 1990's vintage tudor, but made with proper soft lead came as the Elizabethans would have and with individual diamond lights set in.

Rest of 10 similar windows in same skip beyond repair. Wrecked apart, the came goes in the scrap bucket. 40lb's of lead = 18 kilos. Lead weighs in around about a quid per kilo most days so I'm into profit...

Offer up bricks, windows, doors and timber. Fit is nigh perfect with just an inch of leeway to take care of the left side wall out of both plumb and line by up to four inches with rainfall neatly draining away to the right and down drain a couple of inches from where the three course brick base and back wall meet, just so.

Find a load of corrugated bitumen roofing in another skip. Lucky that!

Take five full sheets for use and a half sheet scrap bit for beating about. Retails at £18 per sheet as new. Few small holes in it, but also have a whole tin of bitumen repair mastic from skip too. No problem foreseen then excepting how to flash the stuff.

Time to think about that later. It's dry in the sky and remains so. 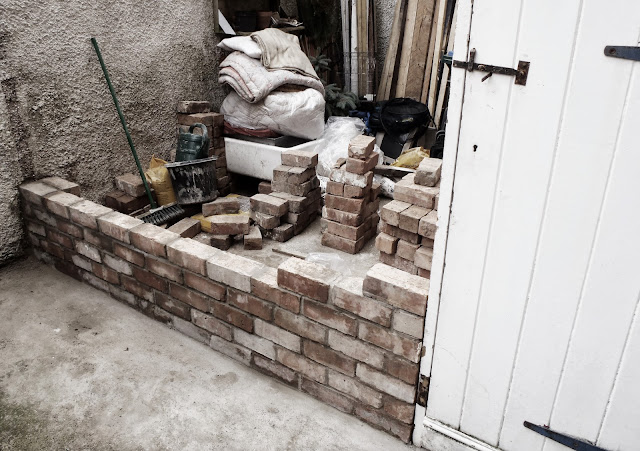 
Wooden fence between rotted in five years because of damp winter conditions so brick wall dividing our yard from the next, the necessary first step. Pains me that I can't find good bags of cement when plenty piles of free sand are seen loitering about. Found alright — water damaged all. Therefore mortar first cost of the project which robs lead scrap profit and when more than first bargained for is soon required, bites deep into pocket.

Never laid a brick in my life — though process seems easy enough. Problem is these bricks are handmade items, therefore (somewhat!) irregular, so, bricklaying career commences in at the deep end with the most difficult easy task in the trade — laying bricks end to end and atop one another but with no two in the entire pile the exact same size and hardly one amongst the lot with a flush face.

Because this is to be a 'half-brick' wall only one brick thick, this means creating a wall with two faces — the public and the private. Public face where bricks are laid in a nice clean, and as far as possible, smooth plane with nicely pointed mortar joints. Private face where differences in brick thickness show dramatically and pointing beyond nicety.

Doesn't matter. Entire environment round Longford way made in same fashion. Congruous no matter what!

Hang garden door off house wall first as sight line and plumb line. Judy's son, Ben, helps out. Complete quickly and efficiently, both learn the art of bricklaying along the way. Of course, first course laid straight atop the concrete slab...

(It was such good fun though that I'd demolish and start over with pleasure should it crack apart come February time.) 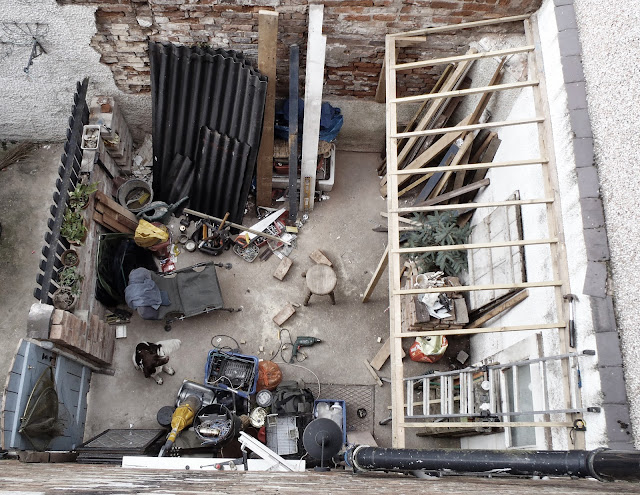 In an hour it's taking shape and within three almost finished.

Seems so correct and so deft in the wooden,

I like it so much but forgive me, I wonder...

Try make me suspect that there's nowhere a blunder?"

Suspection? No worries, (nor Queen's English either!)

I'd rather correction than caught by the neither,

Cast your eye over and task me thereafter,

I'll rip it back down again, plate, beam and rafter."

Exit loved one, convinced. Hero picks up where he left off.

Well after that, just as the saw sang on her very first cut, it was work, work, work, work.  The frame hung together quickly and the windows and doors fitted snugly as imagined. In a week or so it was looking just as good as could be expected. Though there wasn't a straight line to be seen anywhere, it was perfectly in tune with the wonky old walls that kept it aloft, so it looked upright enough and began to stand proudly as a thing in its own rights.

Small is what it was, though. Very small indeed!

But small enough to be a shed of consequence? 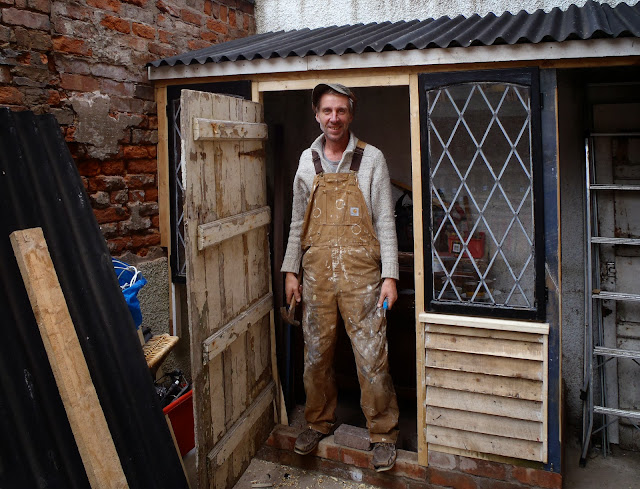