When it comes to crucian 'carp,' the whole world of certainty concerning fish and their genetic purity turns turtle and stands upon its own head. Here is a fish that rivals the roach for sheer uncertainty when it comes to record claims.  Every year fish are disallowed as candidates to beat the existing record set by Martin Bowler, indeed, Duncan Charman's dad has just had one that would have surpassed the British record, had it been true, pronounced as nothing more than a common or garden F1 hybrid by the fish scientist who ran conclusive DNA tests upon a scale sent in for analysis.

It looked like a crucian to me. It looked like a crucian enough to have an experienced angler such as Charman, though he expressed reservations about its overlong tail fin beforehand, taking a scale from the fish's flank just to be sure and putting it in the post. It would have fooled most. However it was not to be. They rarely are 'to be,' these claimed record crucians, because the purity of the species is easily polluted by the genes of other members of the cyprinid family, especially the brown goldfish and the common carp, which is why the country's most famous crucian 'carp' fishery, Marsh Farm in Surrey, protects its precious stock of genetically true crucians assiduously, asking anglers to put any and all suspects who might add their spunk to the crucian eggs in large nets provided at intervals along the bank, so that they can remove them elsewhere, and ensure that the pure stock remains intact with wholesome integrity, and pure pedigree.

Elsewhere, things are very different. No other fisheries do likewise, well not that I know of. A carp is a carp is a carp to them. So long as anglers come along to catch them and pay cash to do so, they really don't care overmuch about the purity of the crucian stock they hold. However, lots of people do care very much about crucians and work hard to protect them from the fecundity of their poison cousins.

Peter Rolfe has a website, The Crucian Website, and it's one that I'll unhesitatingly recommend here, as the authoritative hub of crucian land. Peter is a true expert who knows his crucian like no other and has been beavering away to protect them for years. Peter insists upon referring to a crucian 'carp' as a 'crucian' by name and by dint of the fact that they are a distinctly separate species from carp themselves, and he's right. We don't call roach by the name of 'roach carp', or rudd by the name of 'rudd carp' or even carp by the name of 'carp carp,' even though that is what they are if we insist upon calling crucians, 'crucian carp' as they are all cyprinids. I like that kind of clear distinction, as fish require firm footings and unclear fish, very firm foundations indeed.

So, we have a clearly distinct species in name. The crucian. That's established. Now, what about the admixtures, the mules, and the bastards? Well, crucians freely mix genes with both brown goldfish and common carp (can they mate with mirror carp and produce partially scaled hybrids?) but the offspring look so much like crucians that confusion is certain. The tell tale signs are not immediately obvious but a big floppy tail fin is a dead giveaway for a possible goldfish cross and a barbule, or the remnant of one, is a sign for a carp cross. Crucians have no barbules, nor do they have floppy tails, but hybrids will probably have some trace of the parent species signatures remaining.

Brown goldfish are not necessarily 'brown' and can be bright orange or white or reddish in tone, as with the fish above, who are all brown goldfish (I think?) Funnily enough, when I caught these fish I was fishing specifically for brown goldfish for fishing challenge points but dismissed them as mere ornamentals and didn't claim any points for them as they didn't have the floppy tails I thought brown goldfish always had (and they weren't brown either!) So a floppy tail is no giveaway after all.

What is a good sign is a proper scale count that gives a count along the lateral line of 32-34 scales with anything outside of this count being a warning bell of a possible hybrid, because carp have more, and brown goldfish less. That Marsh Farm pure-bred crucian pictured earlier, on first count had a score of only 31 scales and it also had what looked like the remnant of a barbule and quite a large tail fin. On closer scrutiny the scale count made 32 (phew!) and the barbule turned out to be nothing more than the lower lip projecting, though I had to check other pictures I'd taken of the same fish at better angles to view the mouth to confirm this. As for the large caudal (tail) fin, well that's not a clear sign, unless it is really huge, but the lack of a fork in it is a good one, as true crucians don't have one. The fish passes muster, but it goes to show how careful you must be with photographs when it comes to identification.

The other confusing thing about crucians is that they come in two distinct forms and just to confuse things further, the picture above is of a true crucian of the first form, the high-backed one, with correct scale counts, no trace of barbules, but with a heavily forked tail. It is a true crucian though. It was caught from an old farm pond along with six others and they all had correct tail fins, this one is simply split, but if caught alone, the picture would suggest a possible hybrid because it looks natural.

The second form is the low-backed one, the Marsh Farm fish all being examples of it, but exceptions are of course possible as demonstrated below by the little juvenile high-backed fish, whitish in colour, and of just a few ounces, caught at that same fishery. Oddly enough it has that same illusion of a barbule in the picture as its larger relative shown earlier, but the scale count is correct, so despite it being something of an anomaly for the fishery, it is a real crucian, I believe ~

As I trawl through the archive of all my crucian pictures looking for crucian hybrids, it's becoming increasingly clear that I have never caught any. All the fisheries where I catch crucians seem to have pure unsullied stock including Packington Fisheries where I have caught plenty of their beautiful clean shy-biting high-backed form and Stockton Reservoir, a fishery unhealthily packed to bursting point with carp, but where the low-backed form I've caught there seem equally pure.

Not much of an article then, without pictures of real hybrids, is it? Then again these articles are not just about hybrids but about 'confounded fish,' meaning any fish that confuses itself with itself, as much as it confuses itself with other species. And crucians, because of their different forms, do just that. However, I am going to have to resort to using the fish others have caught for the purpose of illustrating the hybrids. I don't have any other choice...

The above is clearly a hybrid of a crucian with a goldfish according to the Natural History Museum. Nobody who caught such a fish would be confused about this fact, as it has goldfish written all over it. And they would be right to assume that this not a true crucian of any form, as it has no crucian in it at all! It's just a goldfish, surely? So shame on you NHM, how can we trust you of all institutions, when you can't even identify a goldfish properly?

The above is a weird, dumpy crucian x goldfish cross that I suspect is suffering from an infestation of the tapeworm, ligula intestinalis (the dislodged scales are a symptom) published on Jacks Shed Forum, and with a scale count of just 30 it can't be anything else, unless, with its outlandish shape, it's a crucian x bream, if such a monster is possible? Danny Everitt and I thought so one night on the Warwickshire Avon, when he caught the most 'goldy-looking' bream, ever... We had to take our rose tinted specs off to see what we really knew it was. Easily fooled in the dark, are fishermen! 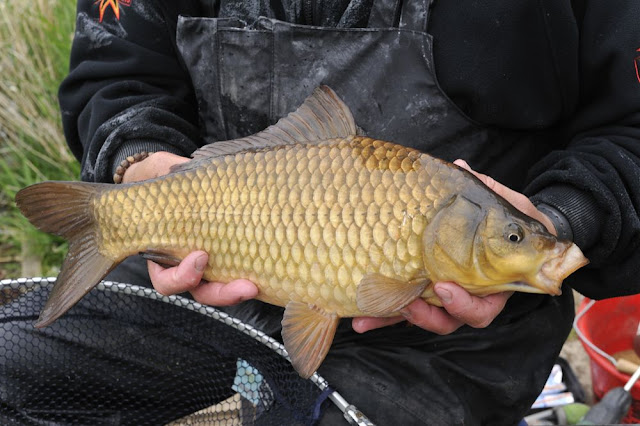 The above is a commercial fishery type f1 hybrid of a carp and a crucian. No barbules, or very small ones, lateral line scale count is right for a crucian, but no chance of a mistake here. It looks nothing like a crucian even though it certainly does have crucian in its genetic mix.

Here's one that looks more like a crucian from Magiscroft Fishery in Scotland. The forked tail gives it away as a hybrid, the 'carpy' look gives away too, but I couldn't tell you if it were a goldfish or a carp cross, though I suspect carp with that 'carpy' looking head. 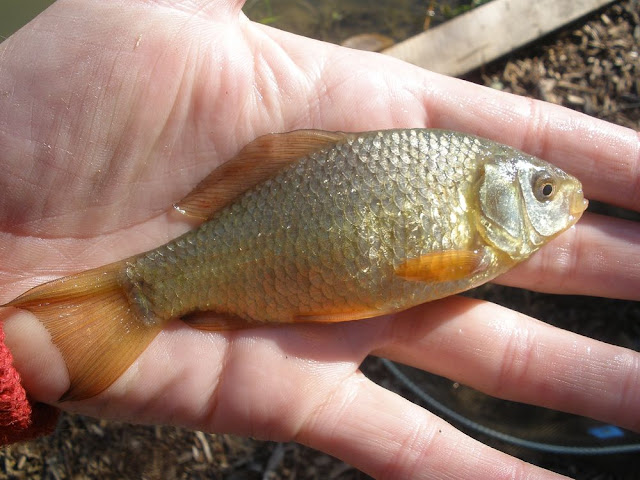 And lastly a tiny fish that I caught from Bishops Bowl fishery that I think is not a true crucian, mostly because of its very long tail fin, but its a juvenile, I'm no expert, and I just can't tell. However, Peter Rolfe will be able to, so, I refer you you once again to him for any problems you might encounter identifying crucians and their hybrids.

The Crucian Website is where you find him. And where he'll no doubt find your fish out for you.