This is the time of year when I begin to catch fish that slip between the meshes. I don't know why Spring should throw up so many oddities but it does seem to bring them out of the weeds. Hybrids, fish of two species parentage, seem to go on a feeding rampage right about now and over  the past four spring seasons I've been collecting pictures of these fish and trying to sort out, by visual clues alone, because portable DNA testing probes are not yet available in Maplins (but they will be one day!) the reliable visual clues that distinguish them from their parents.


I'll start off with roach and rudd, and discuss the inbetweenies they make, as this combination is very likely to cause problems and controversy where records claims for both species are concerned. Hybrids display what is termed heterosis, or 'hybrid vigour,' a poorly understood effect of crossing one species of animal with another (dog breeders use it to improve breeds and strengthen their desirable traits, but they are not dealing with cross-breeding of species, dogs are all one, and their so called 'hybrids' are all fertile, but fish naturally cross breeding between species should not produce fertile offpspring...) but one which takes the form in fish of an increased metabolism, higher feeding rates and consequent faster growth, and speed is of the essence when it comes to large fish, the faster they grow over a lifespan, the heavier they will, or rather can, eventually be at the peak of it. Consequently, Roach x Rudd hybrids, or any other fish hybrids come to that, can exceed the maximum potential growth rate and maximum peak weight of either parent, hence the hopeful claims for very large specimens of the pure species with spurious fish that turn out to be wrong uns' only after thorough examination.

The visual clues that mark out a true roach are, on the face of things, easy to understand. Everyone knows what a rudd looks like, surely? Well, yes everybody does, and everyone also understands what a roach looks like too. Or do they? Well, no they don't to be frank, and I'm not surprised as the mules that rudd and roach produce tend to look very much more like roach than rudd, hence the annual round of  large roach published in the weekly papers that are dismissed as hybrids in the end by a fishery expert who has examined the pictures more closely than the captors (or the papers!) have.

The first thing about a mule of these two classic coarse fish is that the mouth of the rudd with its upturned lip all but vanishes removing one of the sure distinctions between rudd and roach. A hybrid's mouth always looks very much like a roach's mouth, or at least enough to cause confusion. Colour can't be trusted either, rudd can be silver-coloured in coloured water, roach can be golden-coloured in clear water, but hybrids seem decidedly roach-coloured on balance and never quite display that unmistakable deep golden hue that rudd do when caught in clear water. Nevertheless colour is inadmissible as evidence either way. It's affected by diet too, and other variables come into play, so you can't trust to it 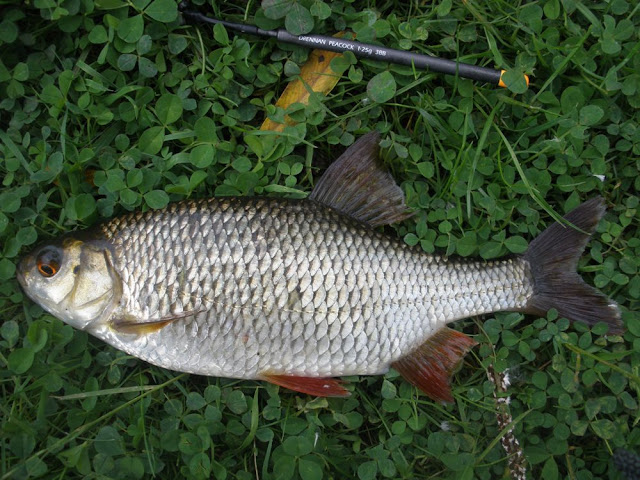 The fish above is a hybrid. It looks like a roach, most would have it down as a roach, with its straight lip, red fins and silver scales, but it's not. If this fish had grown on to four and a half pounds when I caught it, I'd have had a heart attack! The one visual distinction between it and a true roach is not easy to see at first sight but once seen is hard to refute as it stands exactly between the two species and belies what it is for certain.


The red triangle shows the relative positions of the roots of the fins. It is an almost a perfect isosceles triangle and the line from the root of the pelvic fin to that of the dorsal fin cuts across the flank of the fish at an angle.


With a true roach and even though both the above fish do look very similar in every other respect, the triangle becomes an acute one and the line from pelvic to dorsal fin is now almost vertical. In all true roach this should be the case.

With a true rudd the triangle between fins is acute too, but in the opposite direction, the dorsal fin positioned far back along the body of the fish compared to a roach, and the line between them at a greater angle than that of the hybrid. There is no mistaking the fish above even without looking at the fins, it is clearly a rudd, but with fish that are less obvious, in a nutshell, the relative position of the dorsal fin to the pelvic fins is far apart between the rudd and roach, but somewhere in between both for the hybrid.

Now, here's where things become truly confounded. Having dealt with clear distinctions we come, at last, to unclear ones. Let's take a look at a fishery that always has produced near record breaking roach but where things are really hard to establish, with controversy raging for years about the fish it contains, and another fishery where the distinction problem is hardly ever likely to arise. Both fisheries do contain great big roach, and both could feasibly break the record, but with one the claim would immediately accepted as genuine, requiring only witnesses and a clear photo or two to establish its veracity, but the other would require both, plus a scale from the flank of the fish to be sent of for DNA testing, to be quite sure.

Linch Hill Fishery in Oxfordshire has a pool called 'Willow' where truly huge roach are caught every year. It also contains big rudd too. Hybrids are not just possible, but likely, even certain, as it is a still-water where such things as cross-fertilisation are bound to happen from time to time under the right conditions, when weather and water temperature create coincidental spawning times and locations for both species.

The pond where the fish pictured above were caught is no different to Linch Hill in essence. A still-water too, albeit a far smaller one, but subject to the same conditions that produce hybrids, and it does. Lots of them in fact. That Linch Hill should also produce lots of hybrids is the problem though, because no-body really cares what a pond is capable of, but everyone seems to care what a large pit is capable of when it tilts at the roach record every year.


The Linch Hill fish have, or seem to have, and more often than is comfortable if the photos of the fish I have seen are anything to go by (a clear shot of the fish laying on its side unencumbered by fingers and thumbs or skewed by odd angles, would be nice, but I can't find any...) a similar triangle applicable to the hybrid from my local pond, the dorsal fin raked back from the pelvic at an angle. They all seem to display this angle to a lesser or greater degree but I cannot find many pictures where it is truly vertical as it would be with a 'true' roach.

However, the Linch Hill fish also exhibit a curious body shape that is unlike any roach from a still water that I have ever seen. It is most peculiar. In fact. The head is small, at least it appears small, and the back is high arched giving the fish the appearance of a snow-plough, as if it was designed, or had evolved to deal with something altogether more strenuous and demanding than the water conditions of a gravel pit.


Let's look at the other fishery now, the Hampshire Avon, where the fish also run big but where there cannot possibly be many rudd around to pollute the roach population with hybrids as it is a fast flowing chalk stream wholly unsuited to the species. Here the roach display a remarkable trait. Well, it's not remarkable for the Hampshire Avon fish, as they are naturally there, but when compared to the Linch Hill roach, it certainly is. There it is! the same snow-plough shape! The same small head, the same high arched back, but, what is even more remarkable (and coincidental?) is that the triangle for Hampshire Avon roach does not quite conform to that for standard roach, even though they are certainly that, but angles back slightly from pelvic to dorsal fin, because of the shape of the fish, just as it does with the fish from Linch Hill.

My hypothessis is, of course, that the Linch Hill fish come originally from the Hampshire Avon, or at least one of the other fast flowing chalk streams down south where the roach have evolved over the millennia to cope with fast water, hence their hydrodynamic, snow-plough build, which would help them survive it. After all, why would a Linch Hill fish require it? The anglers there talk about strong undertow and how the roach love to ride it, but it's hardly going to be pushing along at the pace of the Hampshire Avon, no matter how strong the wind, is it?

I don't know, or ever will know. What is useful though, is to remember that scale sample when you do catch one that breaks the roach record, because if it hails from a still-water you are certainly going to need all the evidence you can get to ride out all the confoundment that'll surely follow, and will probably suffer a rejected claim based on lesser evidence, such as photos with red triangles on em', otherwise.

But then again, If I'd been in Warren Gaunt's shoes when he caught and submitted a claim just last year for a four-pound nine-ounce roach (not from Linch) that was rejected by the BRFC (well I ain't heard  any more about it if it hasn't, so I guess it has) against pretty convincing evidence supplied by Dr Mark Everard, well then, a photo supplied with red triangles on it, and being interested in these things I would have made one, you can be certain of that, would certainly have swung things...

If the copyright owners of the pictures included above, originating from sources other than my own, object to their use here, I will remove them on request. I'll simply link to them instead.