A piking person's convention took place not five minutes walk from my front door last Saturday. After an excellent day trip to the capital city on business, Friday, Judy and I took the long train journey home during which we digested our disappointing funky decor restaurant pie & mash evening meal with the lubrication of a second bottle of vino. It may not have been wise, but over-baked water crusts, venison lumps like little sponges injected with bovril, pallid salt-free mashes and insipid liquors without any particular taste to speak of, do require a little something in the way of 'body' to accompany them on their way down the bowels.

Arriving back at our front door at 10.30pm totally knackered and the worse for wear we met with Dominic Garnett, our guest for the weekend and next morning, one of the convention attendees. My God! Eight pups create a lot of shit and piss in one un-mopped day. The house stank like a frickin' zoo. Dom didn't seem to mind, though. He was making zeds on the living room sofa bed within the hour just as frazzled by his journey up from London as with were with ours back from Cardiff.

I didn't go to the convention. I'd work to do. Dom arrived back Saturday evening after another gruelling day when we all walked down to The Greyhound for well deserved refreshment. On the way I showed him the canal by moonlight where we'd both be heading next morning after those zeds he'd been making the night before.

A nice warm day ahead under a bright clear sky is not what anyone who doesn't know better would call ideal weather, exactly, but I tell you it does not matter. That received notion that zander prefer to feed in the gloom and the pitch is so much nonsense. They'll feed any time day or night all weathers inclusive. They'll also not feed either and that applies to night time as much as it does to the daylight hours. The thing is, you never can quite work them out, and that's refreshing. 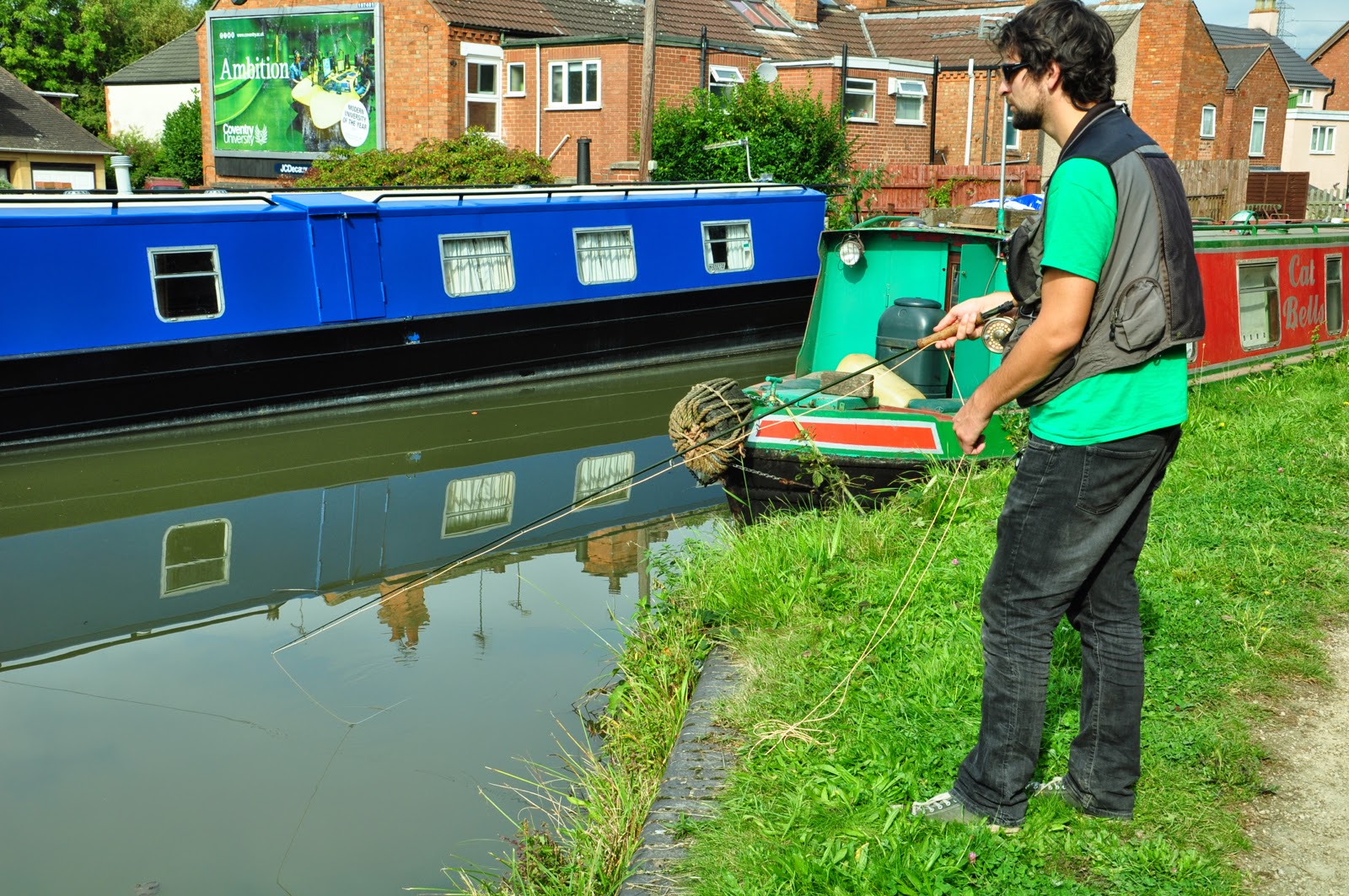 Dom set up a fly rod. I was very interested to witness a fluff caught canal zander, but locals passing by were simply astonished because they'd never seen such a method used in their vicinity in all their long lives. Such is the bond between venue, approach and expected targets they thought perhaps trout must be on our evening menu, views Dom has done much to scotch in his own written work on successful fly fishing for coarse species.

Setting up a single dead-bait rod I cast a tiny roach head bait where I always do for starters — slap in the gap between the bow and stern of two adjacent boats moored along on the far bank. The float was toodling off before the line was sunken. The result the first of what I hoped would be many, many zander by nightfall. It was only a one-pound tiddler as was the half-pounder to my second cast which like the first took the bait almost on the drop. But that was that for that particular lie and so I moved along to the next set of hulls. 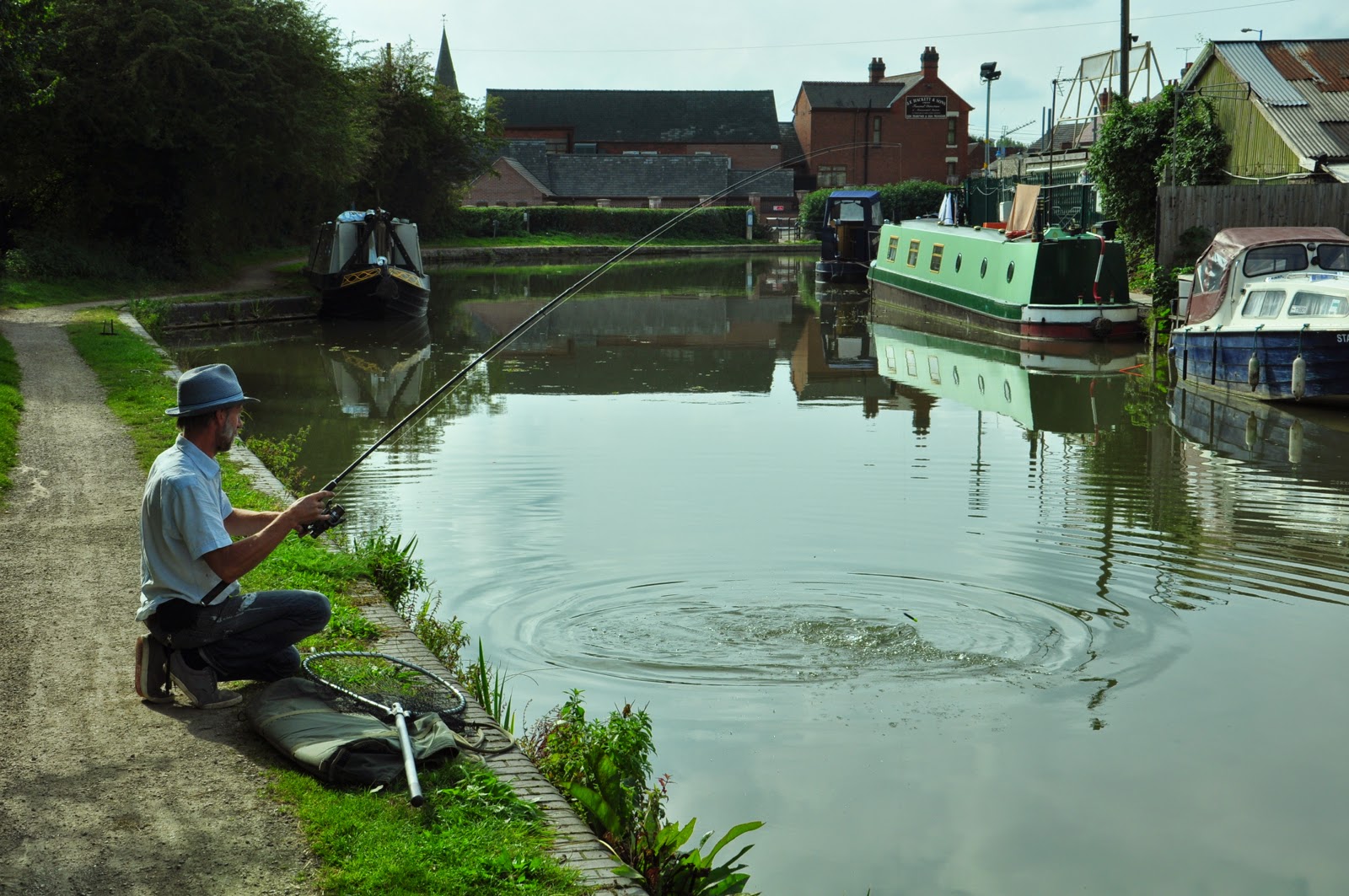 With canals, not every holt that once held fish necessarily will on the next day. Soon I moved along and along again till I found another pod from which two were banked in quick succession, one of them of a respectable weight. Dominic had set up a feeder rod in the meantime but wasn't finding fish with it. We departed Longford Junction for Hawkesbury Junction where I assured Dominic there'd be zander to catch and without any doubt in my mind we would. 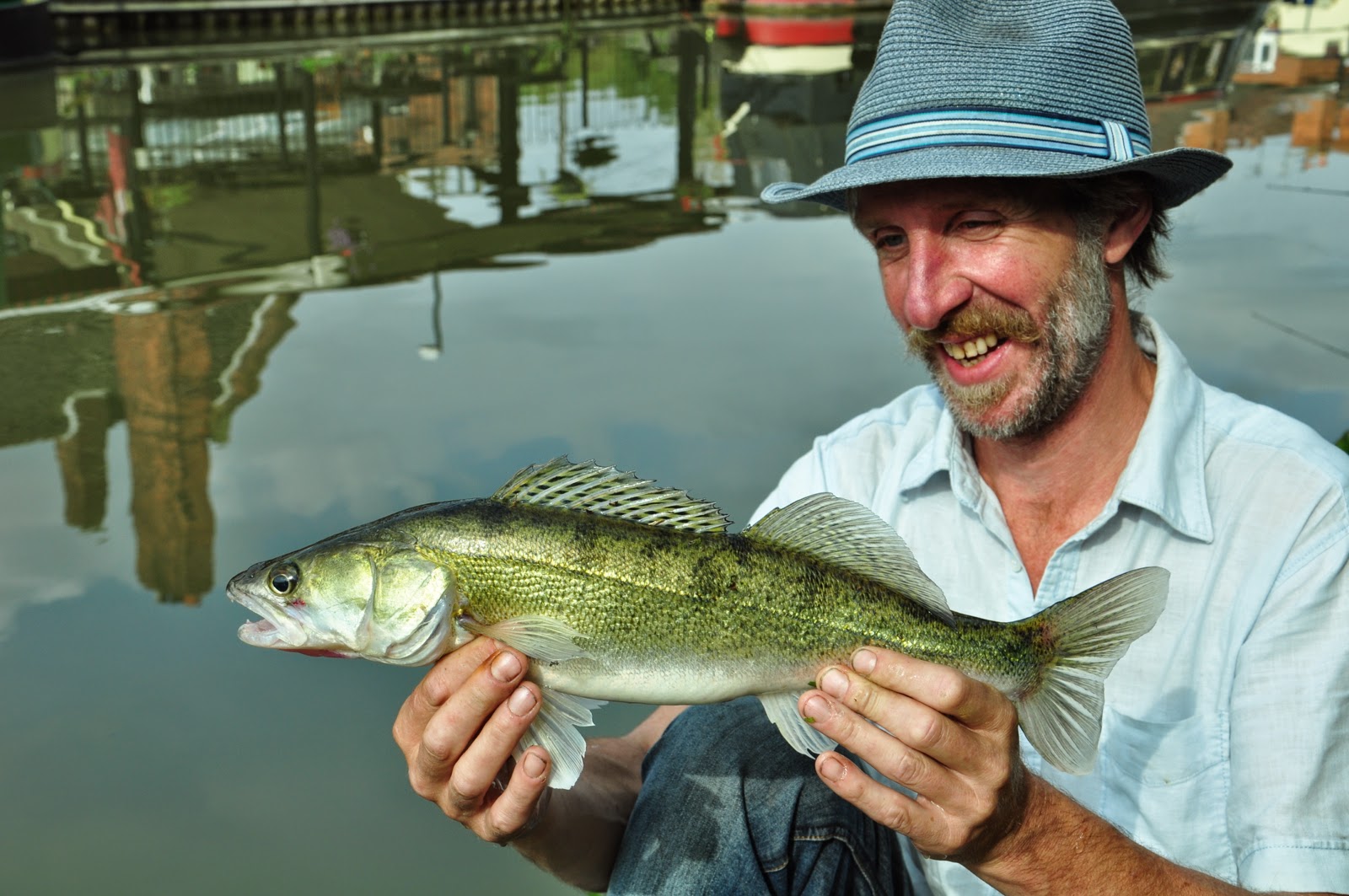 Along the way we stopped at boats moored near-bank where by pulling his fly along and beneath a hull, Dom finally hooked a fish, but his hook hold failed and it swam free.

At Hawkesbury, the swim we were heading for was, as usual, occupied. It almost always is but luckily the residents were a gang of four ten year old boys who'd somehow managed to cram together in a huddle of bristling rods occupying just a quarter of the water at their disposal. We crowded in too. They didn't seem to mind that and nor did we — their antics were hilarious! 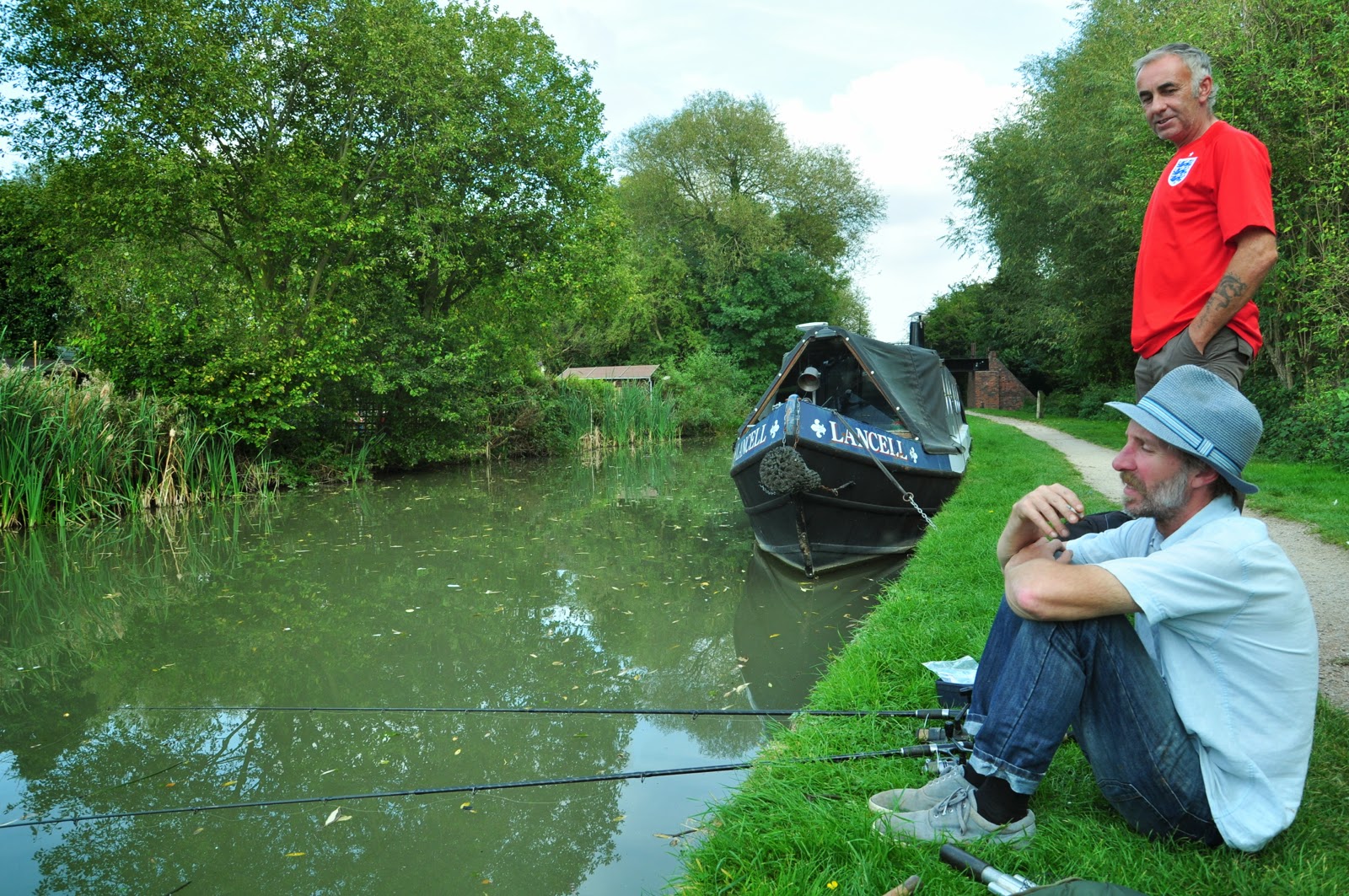 There's a particular sweet spot in this swim from which I've caught at least half the zander that I've ever taken there. If I'd explain its exact location in exhaustive detail you'd still be off the mark it's that tight. In fact if I'm not able to fish from my preferred spot on the bank, and today that was where the boys were encamped, then I have to walk to it, calculate angles, and work out how to cast bang on from my unpreferred position. That's what I did, and fishing commenced.

I don't have a clue why it is so productive. A nondescript patch of open water at the junction between boat track and far bank shelf there's apparently nothing to commend it. But once again it gave up zander. A further three fish were banked. Dominic's ledgered bait cast far bank also had some action, but once again his fish, and by the bend in his rod it looked to be the best of the day thus far, was lost beneath the revetment at our feet in the last quarter of the fight. 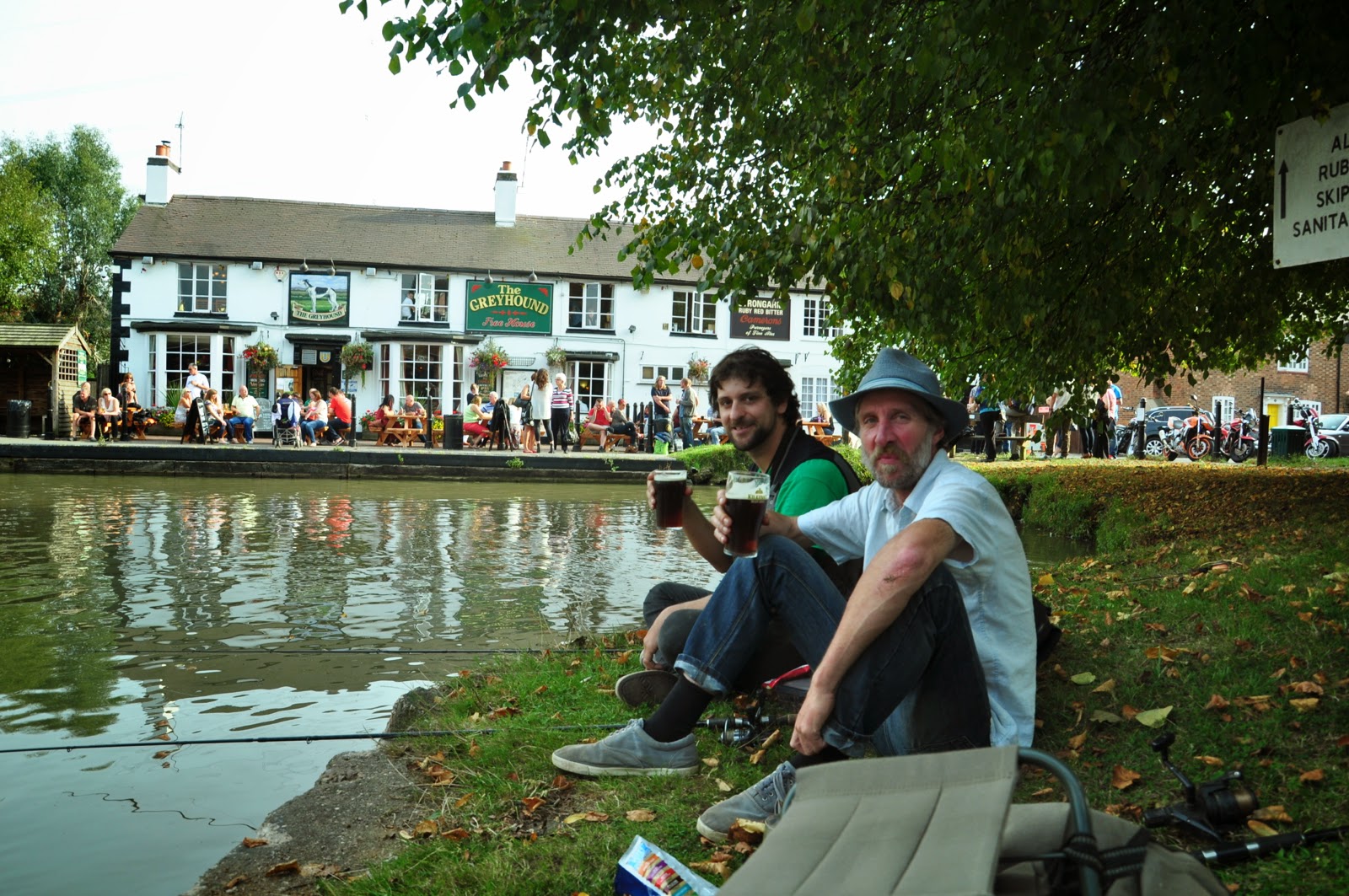 Judy came down from the house, we wound up at The Greyhound (once again!), commenced fishing off the bridge bank with pints of the American brown ale we'd taken a shine to the previous night in hand, where Dom lost yet another fish to a flimsy hook hold. It really wasn't his day but perhaps there was hope for him (after a second pint, of course...) at our last port of call — right back where we'd started many hours hence and in the witching hour. 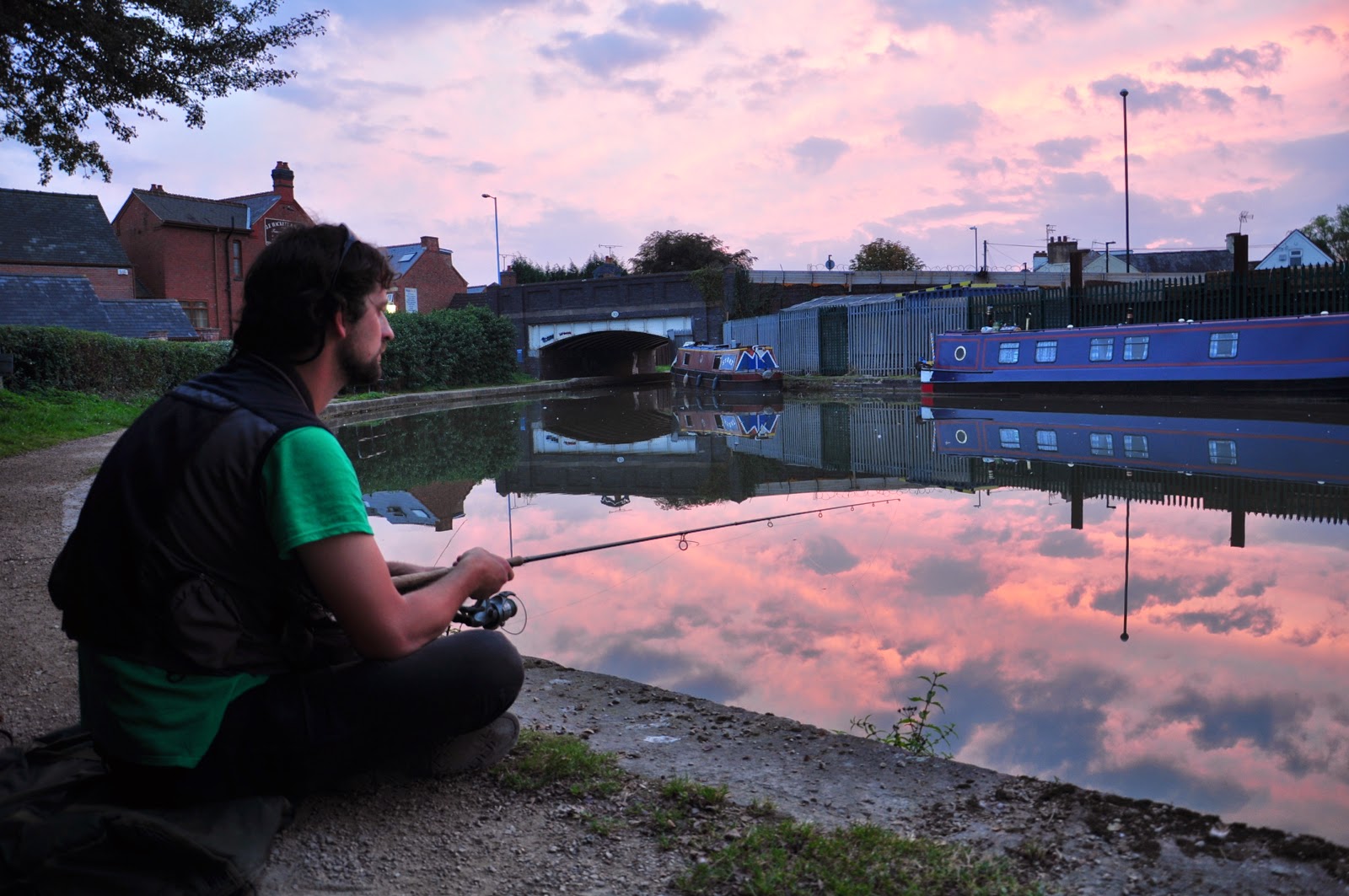 By the failing light zander in their ravening packs venture on the nocturnal prowl. Textbook stuff. Or so they'd have it.