Walking Molly is a serious business. A wayward child, anxious to learn, difficult to teach, eager to please and prone to falling into water. I think she loves watery places too much, likes to get in them rather than just look at them, and never seems to want to return to the house until thoroughly drenched
. 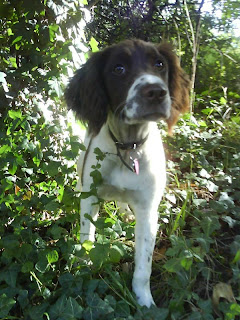 On this bright morning we walked along the canal to Hawkesbury junction and diverted along the Oxford Canal to the tackle shop, where I met up with a fisherman, who I already knew from the Greyhound, trying for pike with a soft rubber perch. Had not caught anything, but was sure that he would, if he cast to a fish. It seemed pretty unlikely, what with the heavy boat traffic on this canal stirring the water up to a thick soup that would defeat the eyesight of anything but a Zander. Then I remembered that Zander were supposed to inhabit the Coventry canal and so I bought a packet of Shads, and went home to get my gear.

I thought I might walk the 4 miles or so from home in Longford to Bedworth, and tow a shad behind me all the way. This might seem like a quite silly idea but when you consider that casting lure across a typical canal results in a retrieve of about ten yards, I figured that walking the lure, trolling from the bank, would cover more ground, and more effectively, than casting ever could.

It was a good walk, but I had not a touch. The technique would certainly work well if fish were interested and near the lure when it passed by. The rod, which I had at its eleven foot length, towed the shad everywhere from mid-canal to the near margins, depending on width and bends, and its soft tip allowed the movement of walking to impart a realistic fish-in-trouble motion to the lure. I tried a plug for a while but the underslung treble hooks snagged on numerous underwater obstacles and after just a few minutes use was lost for good. The shad, with its single hook protruding from the top performed brilliantly, hardly snagging at all and if it did then it was usually surface rubbish that was caught, and only if I walked too fast.

I met some workmen fixing up the canal infrastructure, and they were very interested in my technique. We talked for ten minutes or so about fishing, well three of the four did, but one , who was obviously not an angler, was out of the loop. They wished me luck, and when I met them on the way back two hours later they commiserated with my fruitless efforts and mentioned that it might have something to do with zander culling. Sure enough, a little googling threw up the answer. The canal stretch between Sutton Stop and Marston Junction, precisely the length I had just fished, was culled in the spring of this year and over a hundred zander up to fourteen pounds in weight, were removed and sold on to the fishmongers. Oh well.

Next day I fancied another try so went the opposite direction reasoning that the cull would not have wiped out zander stocks toward Coventry. This time a had what I fancied was a proper take, a double rattle in fact, but did not connect. The soft shad came back unmarked so I'm not certain it was, but I had nothing else happen either this day or the previous that felt anything like this, and so I chose to believe it was a take, if only to serve to get me back out for another try.

A few mornings later I had another crack at it. At the canal entrance, as I was setting up, Molly bounded up to a guy coming down the towpath swigging from a beer can. We struck up a conversation about springers and their madnesses, and fishing. Molly fell in the canal again, as predicted. He offered me a tailor made and we smoked together, talking of all the local fisheries, that he had not fished for years. By the time we had finished I was pretty sure that he would dust off his old tackle and go fish, once again. After all, once a fisherman...

The walk was about a mile out and a mile back and as before little was happening. I was trying to tow the lure as far out as possible and having no luck. On the return journey a longboat approached from behind and I had to walk the lure right in the margins. As the boat got to my shoulder I had a rattle on the rod tip and struck. I didn't connect but was so sure it was a take and not the lure hitting sunken rubbish that I went back and walked the lure past a few more times. At the point were the take had occurred I saw a couple of small clouds of sediment in the margins and they were not caused by the boat, they were caused by a fish lunging for the shad, I was sure of that.

From then on I walked the lure as close to the bank as possible to test the idea that any predators in this canal would, or perhaps more rightly, only could ambush from under whatever cover they could find, and that could only be the two banks. The far bank lined with overhanging vegetation was out of the question (only for now, I'm working on planer board that will get me access to all the cover on the far bank) but the near bank on this stretch did have some cover in the form of tall weeds and of course the bank itself. I also felt that I'd been walking too fast and slowed right down to an amble letting the motion of my step jig the bait.

A few hundred yards further and the lure stopped in its tracks just a foot from the bank. I struck, and felt a fish on. Not a large fish, but a fish all the same. I hoped for a zander but got a small jack pike instead, which was just as happy a state of affairs as any zander, because I'd not caught a pike in some considerable time. It was a rather beautiful little fish actually, boldly and brightly marked, and with perfect proportions. 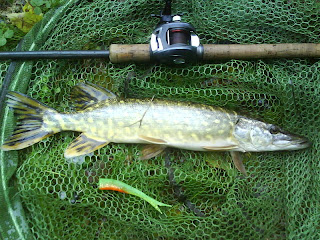 I felt very pleased with myself. Now I had some fishing right on my doorstep. Anytime I wanted to get out for a few hours all I had to do to, to justify the time idled away in pursuit of fish, was to walk the dog. And she, being a springer spaniel, needs an awful lot of exercise, as everyone knows.