I woke this Sunday morning thinking that fishing would be out of the question for the day, what with all the other things that had to be done. On Saturday we'd spent a fortune on fixtures and fittings for the two projects that have taken over every free second of all our days - our new gallery, which opens to the public on 27th of November, and my new painting studio
. Judy had other ideas, she wanted to get rid of me as she had to mark her students work, but I badgered her into coming along with me and doing the job on the bank. And so, after calling into the tackle shop and getting some hooks, and the Greyhound for a lunchtime drink, we set off for Anchor Meadow, where I had plans to give the chub a miss and target the barbel.

Judy took Molly off for a long walk as soon as we arrived and I busied myself with the business of choosing a swim. A shallow stretch with a bit of flow at the top of the island looked at first sight, a likely spot. Against the grain of my normal practice of using only the one rod at the one time, I set up two rods. I had a cunning plan to chuck a running lead with a single pellet into the faster water, point the rod at the lead, ease the drag right off till the tension against the flow was just so, and then listen for runs while I watched the tip of the other rod, as usual. I thought this was reasonable, as I expected to have wait some time for my intended quarry.

The bailiff caught me at the top of the bank, pinched a fiver and told me that the barbel fishing had not been so good - a contingent of anglers who'd travelled all the way down from Newcastle had blanked and only just left for home. I thought the conditions looked very promising for a barbel, I had it in my head to catch one only having caught the one specimen before, so I was undeterred. I think you make your own luck and perhaps all the bait the Newcastle lads had put in would pay off for me, and besides, the weather was on the turn from bright cool and clear, toward warm, overcast and windy conditions, which is a situation that I like very much.

The swim choice was not a good one. I knew instinctively, as you do, that I was in the wrong place. Swans cruised across every few minutes, making me jittery about tight lines catching webbed feet in the shallow water, and the freshening wind whipped the rod top of the avon rod so that I couldn't tell a knock from a gust. I stuck it out for an hour and decided to move downstream to last weeks comfortable sheltered swim beneath the willows.

Judy and Molly returned half an hour later looking fresh after their jaunt across the fields. Judy got out a pencil and proceeded to mark a thick pile of student papers, Molly proceeded to upset my applecart, pitching rods off rests and catching line on her tail, and then I heard the line peeling off the spool of the improvised 'baitrunner'. I pulled the rod around and connected with a very strong and determined fish which felt to be, at the very least, six or seven pounds. This was no chub tugging my string, that much was certain. After a few minutes of dogged play a pristine young barbel (of only four and a half pounds!) flopped into the net, that Judy, without any prior experience, wielded like a seasoned expert. A full distinction for her then! 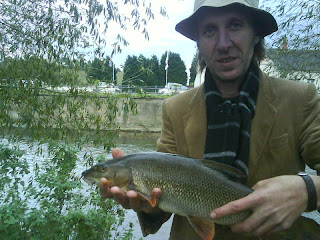 I returned the fish upstream and cast again, wondering all the time how such a small fish could have fought so hard. Five minutes later the 'baitrunner' spun into life as another fish turned downstream with the bait. Once again, a very powerful and determined fight resulted in another lovely clean barbel with a well healed pike scar on its flank, and a little fatter than the first. Molly, fascinated by the thrashing fish as it entered the mesh almost fell into the net along with it, but once on the bank she nosed it, and when it did nothing, promptly lost interest. 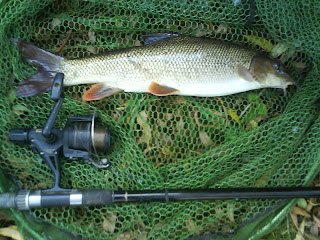 The second of the day...

It seemed that it might well be the case that a shoal of medium sized barbel were out to the right of the swim and ready to mop up any bait that came their way so in went a handful of free offerings to keep them going, I and cast again to the same spot in the faster water, dead midstream, where all the action had been. I poured the tea while Judy went to the car for the sandwiches. Luckily for me, Molly decided that she'd worn herself out and went to kip on the backseat. Judy sat down beside me, ripped open a sandwich packet and then once again the 'baitrunner' ticked over, stopped and then screamed off. This was the third fish in little over twenty minutes, just as strong as the previous two but plumper than both. 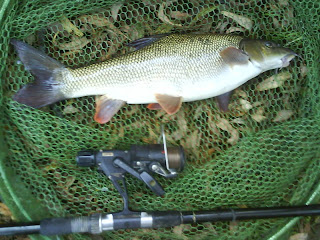 And the third, in less than twenty minutes

Things were just a little frantic now. I really had to drop one rod and concentrate exclusively on the area that was producing all the runs. The centrepin rod had not twitched during all this furious action, but if it did, then I'd be in real trouble. Before I could put this plan into action another fish peeled downstream against the baitrunner, and this one felt like a bit of a biggy. After a good five minutes, and approaching the net, the hook pulled. Thoughtlessly, I recast, just to get the rod out of harms way and went to retrieve the centrepin rod, fully intending to pack it down, and then just as my hand approached the butt of the rod the pin started spinning. I struck into a fish that powered away to the far bank and then, horror of horrors, the 'baitrunner' was ticking like a clock! I checked the lines to see if I was crossed up, but no, it was another bloody fish! Judy was my only way out, thank God she was there! She had never caught or played a fish of any kind, let alone a barbel, but now she was about to learn. I ordered her to pick up the rod and close her hand over the spinning spool and just pull into the fish. She didn't even hesitate, the rod hooped over and she was attached to what I could see was another strong fish. I leaned over, passed my rod to my left hand and tightened her clutch down to about the right point and flicked the anti-reverse off to give her the option of backwinding. I tried to bring my fish to the net as quickly as I could, which is no easy task when you are also giving instructions to a complete novice, but thankfully she was doing a very good job of holding her fish against the current, and though I could see her having a little trouble winding, was instinctively pumping it towards the bank. I got mine safely in the mesh then thought I'd have to land her fish in the same net because I couldn't unhook mine and keep an eye on Judy too - and then her hook pulled and it all went slack... 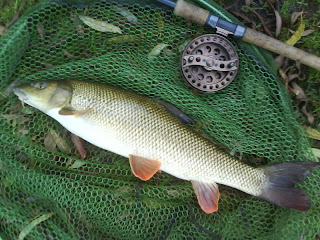 The sixth fish hooked, the fourth on the bank

She was not in the least bit disappointed by the loss of her fish. On the contrary, she now wanted to fish the 'baitrunner' rod herself! I agreed. If she had ever wanted to dip her toes in the fishy waters, then today was certainly the day to plunge in headfirst. So, being the headstrong type that she is, proceeded to rebait, and under a little instruction, cast. I showed her how to set the rod up on the rests and we sat back to wait for runs. She calmly went back to her marking... 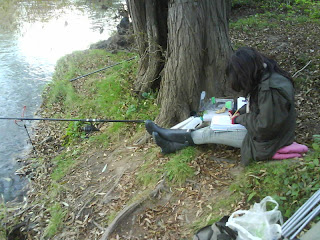 We'd been in this swim for about an hour and a half now, and most of that time had been spent playing, netting, unhooking and photographing fish. It was getting dark now and so I reasoned that this would be our last chuck of the day. We drank the last of the tea and then Judy decided that she was in the wrong spot and needed to be in the right spot because she should have caught a fish by now! She managed another good effort that sent lead and bait three quarters across the stream. She slackened the drag, placed the rod on the rest, the rod bucked, the spool whirred and she struck perfectly into her first entirely self caught fish! Just like that! She coped wonderfully considering how testing such a fish could be for an utter novice and pretty soon had it almost beaten and ready for the net. Then, with net in hand dipped in the water for her fish, the centrepin sang out. I struck cack-handed, holding the bucking fish on auto-pilot while I attempted to land her fish. She had reeled too far down to the fish and it swirled dangerously close to the rod top. I instructed her to backwind to give the fish enough line, and herself the right angle to draw it over the net, which she did, when we'd working out where the fish had gone, quite perfectly. Job done, I gave the net to Judy and proceeded to fight my fish toward her. Once again she performed the netting, with her own fish already safe in the mesh, to perfection. Obviously, a natural. 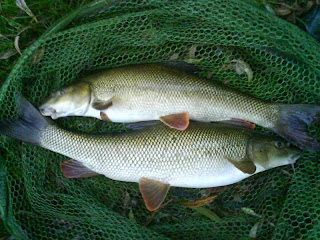 Peas in a pod

The mess of rods and line was sorted out and the fish were unhooked whilst the net was still in the water, and then the brace were carefully taken up to the soft grass for the photos. Judy was justifiably proud of her achievement, a big beaming smile on her face. A fine first fish, and perhaps a fine fisherwoman in the making. She has no idea what she has got herself into... 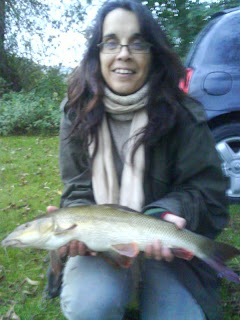 Judy loses her angling virginity to a barbel! 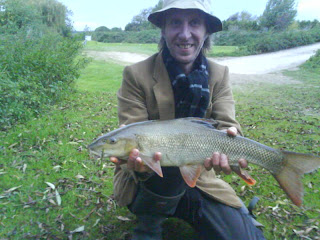 The last fish of a hectic day

What could better this? Well, nothing really. And so we packed up the gear and headed for home knowing full well that the feeding frenzy of the Avon barbel was far from over. I've no doubt that if we'd stayed into the dark then we would have landed many more fish, and as it was true that the average size of fish had increased throughout our few hours on the bank, even one of the infrequently hooked, but very big Anchor Lane doubles.

If the light, the phase of the moon, the water, the weather, the bait and the swim and my luck and judgement are just right, then who knows? Next time, or the time after that, perhaps?