My best mate John came up to Coventry on Saturday, and because the weather forecast was so good for Sunday, we just had to go fishing. Where to actually go fish was down to me, and that proved a difficult decision to make. It would be a river, but which one, and where?
The only criteria was that we had to share a swim because we had a lot of catching up to do, not having seen each other for very nearly a year. It would be a talking, and fishing, kind of excursion.

The Avon at Bretford ? Well, the swims are shareable but limited by the small size of the river, and its nature - very much a catch one fish and move on kind of place. The Severn was a possibility but just too far away. The Avon near Leamington? No, the beat is strictly limited to one man pegs. Out of the question. I went online and googled my way to Anchor Meadow on the Avon near Evesham, promising a whole range of fishing types including a weirpool. I decided that we would go after a barbel or two.

Judy dumped us off at the island pegs and bade us good luck and went off to Stratford with Molly. We set up shop at the weirpool and cast out leads and baits. The weather since morning had improved by the hour and now, in the suntrap of the weirpool swims, was unusually hot, more like June than October. We were sunbathing after half an hour. 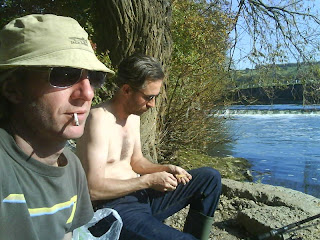 The serious business of doing nothing

This was the first time either of us had fished a weirpool seriously, and it was an education. It was weedy, turbulent and snaggy, and we lost tackle until we learned where not to cast. I found myself casting blindly, hoping that the lead would settle into place all by itself, which often it did not. We thought that the bright sun on the clear water made it unlikely that the barbel would come out to play for us and when after a couple of bite free hours the bailiff advised us that we were wasting our time casting into this pool on such a day and let us know that by far the best bet was to move up above the weir to deeper water, we took him at his word.

We chose an agreeable, shareable swim with an even strong flow under the shade of the willows and continued our jawing. It was cooler here, and after the weirpool, relatively quiet. On the opposite bank was the Fish & Anchor pub, just a paddle away, but a 14 mile journey by land. It would have been only right on a day like today, to wade across and procure a couple of pints but of course, that would have spoiled a good swim.

John saw the first kingfisher of his life, a turquoise rocket. I've learned that when someone says 'kingfisher!' you look for it as you would look for a low flying fighter aircraft - well after the report. It amazes me that Judy has still never seen a kingfisher, nor a shooting star. I'll take her out on a river through the day and through the night. She'll see both, so long as she fishes rather than reads a book. 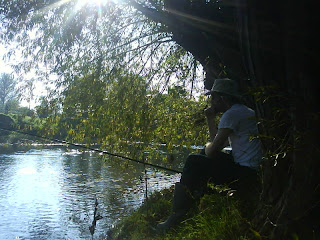 John beneath the willows

We started getting twitches twenty minutes after chucking in some crumb and hemp. I felt the baiting was a bit haphazard, the current separating the cloud of crumb from the hemp with the former disappearing downstream, so I loaded my new and hitherto unused baitdropper with crumb, hemp and pellets. Loading it was one thing, casting it another, with the soft Avon rod trying its best to cope with the weight, but when I felt it swing just so, I heaved it in. 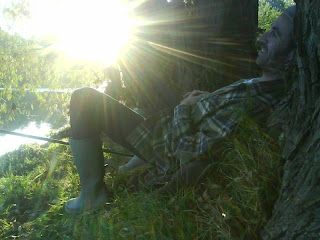 The whole art of fishing

About twenty minutes later I caught a one pounder. A chub, though at first I thought it was a nice sized roach. John was having some trouble registering bites and when he witnessed the bite that produced the chub concluded that his rod was too heavy. He was right, it was my only lendable spare rod, a two and a half pound carp rod which is ok for barbel in weirpools, but no good for chub of a pound or two. I felt that I should have given him the avon rod as he was my guest and offered, but he politely declined. We went on all afternoon and into the evening with another couple of chub up to two and a half pounds to my rod. What can you do? I'd rather he caught fish than me, but we at least decided that this was something to do again and again, and he is now hunting for a travel avon rod to sling in the top box of his bike. 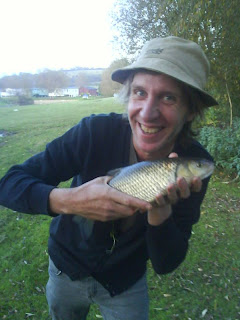 My idea of a trophy shot

We would have stayed till midnight, and next time we will, but Judy eventually came to extract us from this idyllic October day, catapulting us along the A46 back to the quotidian reality of work, for that is what everything else in life becomes, no matter how you look at it, when indulging oneself in the wholly blameless pursuit, and thoroughly idle business, of catching fishes.