When the wind is in the East...

My good friend John, who came up to Coventry to paint a sign on the door of our Gallery on Sunday, has bought himself some tackle so that when he visits we can also get a few hours on the bank. This weekend I decided that we would probably both fit into the swim at Bretford where I'd had such a good day last time out
. It is not a big river here, and most swims are strictly one man affairs, but here I thought we could both squeeze in and jaw away all afternoon and still be in with a chance of catching something.

The weather was colder than it first appeared to be, clear and bright, a few degrees above freezing, but with an east wind finding every chink in our armour. It became necessary to wrap our scarves around the back of our heads and under our hats, pull gloves over cuffs and tuck everything else in where it could to avoid a chill. Luckily we would have our backs to the wind in this particular swim and so it would be tolerable for a few hours. 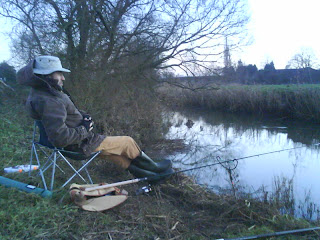 I was using a new rod, the amazingly cheap Ron Thompson Godfather Avon, set up with a quivertip, and for the first time in months, a fixed spool reel. The reel choice was made because of the difficulty of the cast I would have to make downstream to the right of the swim and across another angler. I needed predictabilty! In the light of the lessons learned on my previous trip I baited up with a large piece of hair rigged meat, but John opted for a small chunk straight on the hook. John though that my bait was enormous, but I assured him that it was not as big a piece of meat as I would venture here if I thought they'd be in a really greedy mood. I baited the head of the swim and we sat back to wait for bites.

After a predictable twenty minutes the small twitches and knocks began in earnest. John struck a few without connecting and then I missed a good bite too. I thought for second that a repeat performance of my previous troubles was about to occur, but then I had a big pull on the rod top and connected with a strong fish which found snags downstream on the near bank that threatened a loss, until I lowered the rod top to the water and slackened off. The fish moved down in the water, the line pinged off the branch and the fight was then conducted in open, and safe water. When the fish appeared on top John could not believe the size of it. It was a good four pounder, a size that I have come to expect as the stamp for chub in this particular stretch, and nothing out of the ordinary.

Unusually, this fish had been deeply hooked and required minor surgery to extract the barbless size six which had lodged in a very awkward place indeed. It was the first fish since I had started on the rivers that had been hooked anywhere other than the lip. It must have taken the meat right down past the pharyngeal teeth before moving off with it.

A few minutes after casting and settling down, John struck into his first fish - indeed the first freshwater fish he'd caught since he was a teenager. The fish, a chub of course, gave him a bit of trouble under the near bank but was duly netted, and laid on the grassy bank. John unhooked his prize. All his middle aged manliness evaporated in an instant! He was a boy again. Amazed at the unmarked beauty, and average size, of these pristine upper Avon fish. 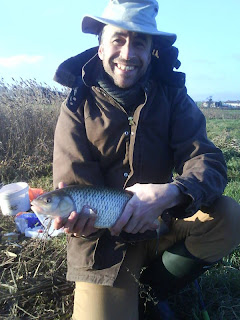 I believed we were about to have a run of chub, that the shoal I had encountered before, were in residence. But it seemed, after a fruitless next half hour, and then the full hour, that actually, we'd actually killed the swim. The rod tops had fallen still, and quite lifeless. This was an excuse for tea and sandwiches, a stretching of the legs and a vigorous warming of our frozen knees.

We fished on contentedly, but It seemed we'd had our sport for the day. We thought that the dead stillness of both rods could signal the presence of a big pike in the swim attracted to the fry that had been feasting on the free offerings. The frequent toppings of small fish here and there did seem to be an indicator of an unseen threat below . As evening approached and the light began to dim we resigned ourselves to a very pleasant but otherwise uneventful evening.

And then, just as if a switch had been thrown, the swim came alive once more. Both rod tops simultaneously began to dance to the tune of an underwater banquet in progress as small fish began to mop up all the untouched free offerings of the past few hours and pick at the baits. I guess the unseen threat had moved off. I just knew the chub would be back soon and so I threaded a really big chunk of meat on the hair and cast it right to the furthest depths of the swim, downstream and under the trees. John persisted with his small meat chunk directly hooked approach and was rewarded with a string of twitchy unstrikable bites that resulted in a retrieved tackle minus bait.

I waited it out and was rewarded with a confident tug that connected with a strong and determined fish, another four pound chub. John was striking bites in an attempt to connect but without luck, just as I had the previous week. It was too cold and too dark for John to retackle so he persisted, analysing what he was receiving the whole time, deciding that his tactics were failing because the bait was being taken between the lips and pulled off the hook without pricking, and my tactics were working because the big bait was being engulfed greedily and the exposed hook pricking every time. I agreed, as I struck into an unmissable bite that confirmed his every word. This was the biggest fish of the day at four pounds twelve ounces.

In near darkness I had another nice chub to the big bait tactics and then we packed up. John was intrigued by the events of the day, especially the nature of the tactics employed and their relative effectiveness under the conditions, and astounded by the average size of the Bretford chub, which he simply had not been prepared for. I decided that the chub, which had provided me with so much entertainment, now deserved a break, and so next time out I would pursue the Avon roach, which if the stamp of the chub was anything to go by, could run to some considerable size.