Fishing in the deep freeze

I managed to get back to Bretford much sooner than I thought I would. Judy decided that fishing was an option for me as she wanted to get stuck into a post-Christmas blitz and would rather I was not under her feet. I of course, complied. So, I atomised half a loaf of bread for feed and bought some meat from the local shop
, thinking I'd go for the reliable chub in what looked from the comfort of a warm house like a quite a cold spell of weather. Then I remembered my idea of pursuing roach and wanted some worms too. In the back garden is a butler sink full of old peat from discarded plant pots that has worms in it. I churned it over and managed to get a handful of dendrobaenas just in case I wanted to go through with my plan. 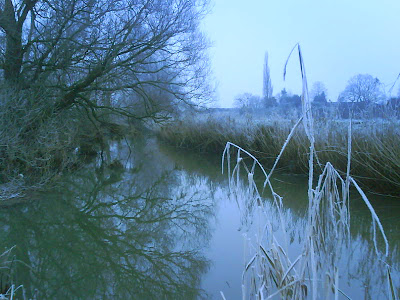 Some way below freezing...

Only when I got out into the street with the tackle did I begin to realise just how very cold it was. The air was thick with freezing fog and there was frost coating every single inch of the trees. A good few degrees below I reckoned. As we exited the streets and entered the countryside, everywhere but the gritted road was white with frost and in the still air hung a milky white mist that blended ground to sky. As we approached the river, I half expected it to be frozen solid! Judy dropped me off and bade me well. I assured her that cold as it was, the air was still, and I would be warm. I checked my phone for charge - before she left me - just in case...

Of course the river was still flowing, but cat ice in the margins and rock solid frozen mud told me that it was far, far colder here than at home. I noticed an icy sensation on the uppers of my wellies. As I had brushed through the long grass my warm boots had melted the ice, the water thus produced had now begun to freeze on the rubber. I wiped them over with the back of my wool fingerless mitts and settled down to fish. 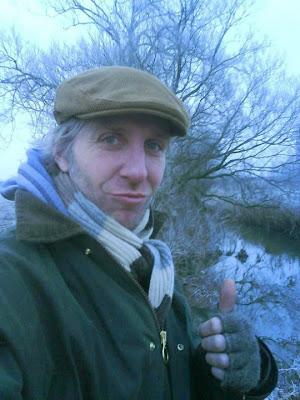 I set up my usual chub rig and cast a large piece of meat far downstream under the trees, then set up a second rod with a quiver tip. This rod was to be the 'roach rod' and would fish the worms on a light running ledger. Both rods were fitted with matching fixed spool reels as I felt that in these conditions I might have severe problems with iced up rings on the quiver tips - not a good thing with a centrepin. The roach rod was loaded with 4lb line straight through to the size 10 hook as opposed to my usual 8lb through to a 6 or 8.

The roach rod was cast into the slightly deeper water to the left side of the swim and I sat back expectantly. And there I sat, in the freezing gloom and waited on. Nothing moved. Nothing happened. I recast, and baited sparingly, but after a couple of hours without the slightest indication of fish thought that a move would be be a good idea. A kingfisher flashed past upstream and I followed up and across the tall reeds till it vanished into the misty distance. I retrieved both rods and went walking after it.

What I found in the reeds were two swims, one at the top of the bed and one and the bottom but also the possibility of creating swims in the thick of them by carefully folding over the reed stems. What lay beyond the dense reeds was a long straight run that looked to have a good even flow and some depth. Ideal, I thought, for roach. 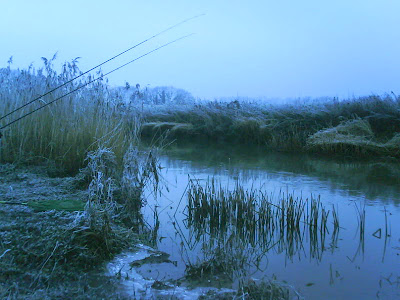 I chose the first swim at the bottom of the run and set up both rods to fish downstream. I stayed here for a while but the result was just as before - absolute torpor. Not a twitch or knock in an hour, to meat, bread or worm. So, I was forced to move again, to the swim at the head of the run, again casting downstream. I put in a little feed and cast both rods parallel in the flow, the chub rod with a big pinch of breadflake on the size 6 and worm on the roach rod. I expected nothing and sat some way back from the rods only to have a great bite on the worm that left the tip rattling long after the bait had been dropped. I drew closer, much closer, cast the worm again and hovered over the handle. Sure enough a similar bite followed and I connected with a fish. I thought it might be a perch but then I saw a flash of silver and thought it to be a fair roach, but it managed to free itself before I had the chance to confirm.

It seemed I might have found the roach and if I could land one, could be on the way to refining my approach with the aim of finding and catching that big roach that I'm sure the stretch must surely contain. I loaded two small worms on the hook and cast again with expectancy. I was concentrated so hard on the worm rod that when the breadflake rod, which had lain idle all this time, suddenly pulled around hard, I fumbled the strike and failed to connect. Was it a roach? I hoped so.

As predicted, the fine rings of the quiver tips were causing real casting problems as the air born water vapour froze solid within them. Every cast was becoming difficult and tricky. I had to bounce the lead up and down to clear a passage through before attempting anything too ambitious. The bites continued on the worm rod, but they were quite hard to hit - too soon and a complete worm came back, too late and the worm was robbed. Eventually I connected and a hand sized roach, just what I was after, came to the net. A good sign that I was on the right track. All I had to do now was refine things, and the first refinement was to reel in the other rod and concentrate hard. 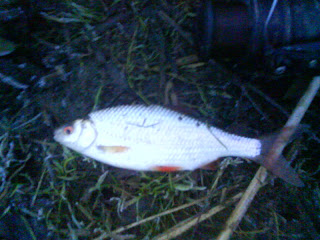 This was a good idea, the swim was too tight and the weather too extreme to handle both effectively, in any case. As the light faded, very early in such gloomy conditions, I hooked and landed another roach of the same stamp as the previous and then found I'd exhausted my meagre worm supply. 'Ah well', I thought. 'At least I've cracked the roach'. I fished on well into the darkness with a small piece of meat hoping that the roach might indicate some inclination for it, but they had either vanished, gone to sleep, or more likely didn't care for it. I had not another touch.