Return to the Blythe

I went to bed with a fully formed plan to return the next morning to the Avon at Bretford to pursue roach and perch with worm, but woke up to find a changed mind, and a changed plan. Today I was going back to the Blyth
e. And the plan was to fish two rods, one set up light and alternating worm and bread, and the second rod set up heavy and fishing meat. I'd already prepared a bucket of groundbait consisting of bread crumb and hemp with a little hemp oil added to bind into a consistency that would stop it from exploding into a cloud that would simply drift away with what would be, after the recent rain, quite a bit of flow. 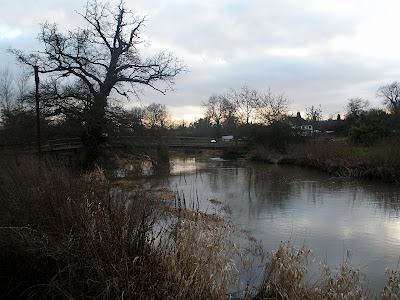 The footbridge at Cuttle Cottage

From the footbridge over the river, the river looked just lovely, full to the brim with water, and just breaking over the banks here and there. It looked very promising, the mild calm day and the graceful line of the river combining to make the whole fishy scene seductively inviting. I couldn't wait to get over the broken stile, and cast a bait.

I set up in the wrong swim. You know these things somehow, but the first swim is almost never my last, and I don't mind making the cock-ups that often accompany setting up fishing tackle, and sorting out the fine points of rod arrangements and bank sticks, bait buckets and bits boxes, while in the wrong swim. When I had sorted myself out, I moved downstream a little and cast into a better looking glide.

I was fishing the meat far downstream and the worm and bread at an angle over to the far bank. The first bite came on the meat rod just as I was putting the worm rod in the rest after casting, but there was no time to put the centrepin's ratchet on. I had to strike, and connected with a good fish, which made for the near bank snags, but then had to get the net, which I'd placed too far left. As I moved into position to fight the fish upstream and hopefully land it, I noticed that line was peeling off the pin at an alarming rate as the current pulled it downstream and so had to do the fiddly job of fighting a fish with one hand, and checking the pin with the other. It was little fiddly, but I did it and returned to the fish. Now I gave it my full attention, and pulled the rod over smoothly to pump line. The fish felt as if it would break surface, and of course I wanted to see what kind of fish it was.

I have no idea how this happened. It was fish - then it was not fish. Perhaps it was a branch all the while!

After such farcical beginnings, which are not rare occurrences for me by any means, I usually take stock of my idiocies and fish very well from then on. I even believe that a bad start to the day serves me well. I got no more bites from fish or flotsam after this episode despite fishing on for a couple of hours, and was soon upping sticks and searching for a pool. I found just the thing. A significant widening on a bend with a swirling current running through the middle, slacks at the near bank, and the far, and with lots of places to cast, to a variety of river features. I knew that this was where I should stay for the rest of the day.

There was a place where the meat rod had to be cast to, a particular place where the swirling eddie currents down the centre, met the slack. I took great pains to get the cast just so, as this spot was the one where the bait had to lie, if I were to catch at all. I don't ask myself how I know these things because I just do. In rivers, lakes or the deep blue sea, the cast must be within a certain distance of the 'right place' or I can't trust it. I'll invariably wind in and recast if I leave it in the 'wrong place'. I get an itch. I never catch fish in the wrong place, ever. Except that is, when I decide, for no apparent reason that a really bad cast has actually landed not in the wrong place at all, but a second right place - one that I did not see at first. Some of my best fish have fallen to the really bad casts!

On this occasion the cast was an easy one, and the meat fell right where I wanted it. I decided to explore the swim with the worm rod. After twenty minutes or so, the meat rod hooped over to the right and I was into a fish, which pulled hard for enough time to allow me to think barbel, but then did the chub waggle, and convinced me otherwise. Sure enough a flash of silver a rod length out confirmed it. It got under the near bank, always a danger with chub at the net, but a little firm pressure and it was out into the open and duly netted. A gorgeous fish, in truly perfect condition except for a single anchor worm attached to the head which without having antiseptic to hand, could not be removed. About four pounds and a half, I reckon. 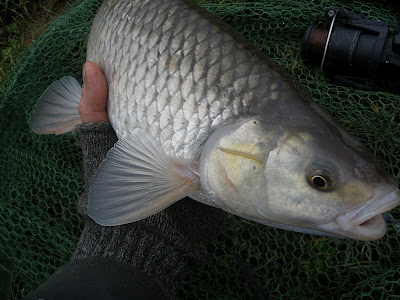 The sun came out for a couple of hours. I missed a good bite, once again to the meat (in the right place), but got not a tremble to the worm or bread flake. I don't know why but the smaller species were either not around, or were not bothered today. I hoped that evening would see them turn on.

Despite knowing that I should stay in the swim I decided against my better instincts that I'd have a hunt around for somewhere better. I wanted a roach or perch and thought that this swim would not provide either. Moving around proved pointless, I could not settle and duly returned after a silly hour, to the only swim that felt good. It was a good decision. The meat rod once again twitched into life but I missed the bite completely. Undeterred, I cast again and ten minutes later connected with a really strong fish that fought me all the way to the net, with a spectacular thrashing at the last. It was a chub, and a good one too. An older fish bearing a few battle scars, very slimy, fat bellied, and with that certain 'big fish look', turning the scales at just on five pounds. 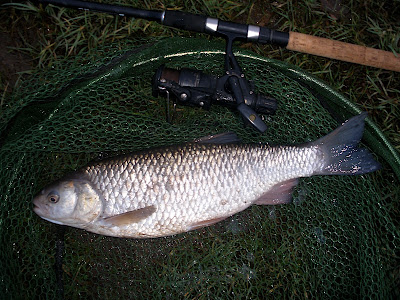 Fishing on into the dusk proved fruitless but pleasant. It wasn't or at least didn't feel at all cold, but finding frost forming on the grass as darkness fell proved that the degrees were around the freezing mark - perhaps I am now, after so much sub-zero winter fishing under my belt this year, becoming hardened to it? I am certainly becoming something of a chub expert, or at least the chub seem to fall to my baits if I am around, regardless if I am fishing for them or not, which may not be the same thing at all! I don't mind, far from it, but do want to see a big roach or perch before the fast approaching end of season termination to my river exploits.

I think I'll put in some more time on the Blythe before then. The average size of my chub from this stretch is very high indeed, around four and a half pounds, and that means that a real monster chub could be resident too. I wonder what size these small river fish can run to ? I suppose if the food supply is very good then any size is possible. I have heard that a huge pike has been taken from the Blythe just recently. Weighing 30lb 8oz, it is probably the largest pike ever caught in the river, and it's not a big river by any means, so the catch is remarkable, if not extraordinary.

I wonder what such a fish eats for supper? Five pound chub? 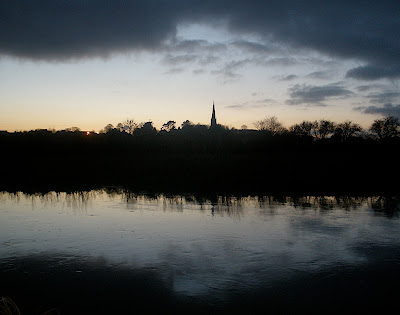