I've been trying to spot dead fish in the Coventry Canal after the freeze of the last month, and with some success. This canal is, on the surface at least, virtually lifeless. I must have walked the route from Longford to Hawkesbury Junction a thousand times and always keep an eye out for fishy activity en-route
, but usually without success. 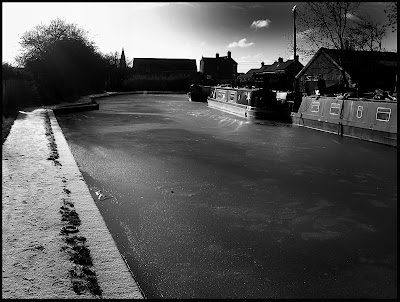 The frozen Coventry Canal at Longford

I've seen a fish roll, possibly a bream, a few tiddler roach swimming just below the surface on one very hot day last Summer, have caught one jack pike and seen one tiny, tiny jack on the surface, have seen a few areas of subsurface activity belied by little bow waves, and a few rises, but that is not a good record for the sheer quantity of time I have spent looking. I have never known an area of water, still or running so apparently devoid of fish life.

Perhaps it is because British Waterways were supposed to have removed the entire fish stock to fill their waters at Makins. I don't know, it was information gleaned from another angler, but now I see that BW are removing excess fish from Makins to restock, of all places, Coventry Canal. Perhaps they could tip a few tons into my stretch?

Anyways, I have spotted a very decent roach of perhaps a pound and a bit, floating belly up in the margins, a three pound bream and a small jack. I am very pleased about the roach, it was good size for any water, and where there is one I believe there will always be more of the same stamp and possibly bigger, so I decided to try to catch at least one, of any size, today. 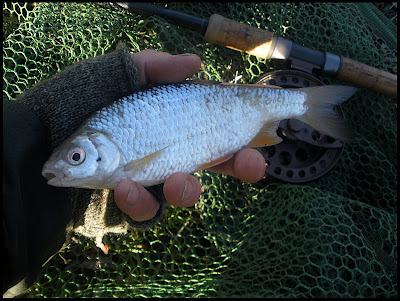 A canal roach, at last!

I tried a few spots, but had no bites, and worse, lacked confidence, so I walked on and on till I found a place that felt just right. It was blowing a small gale and the wind was freezing but I did get a small roach to take my worm. A young lad informed me that he'd had a two pound perch at this very spot, and I saw no reason to doubt him. Perhaps I'll give the place a try with two rods and worms on some fine evening quite soon. I have not caught a perch in many, many years, and I'd very much like to.