Saturday last, Martin and I fished what looked to be a choice stretch of the Warwickshire Avon. Locally famous for its big chub and double-figure barbel I had high hopes of contacting one of the former and it certainly looked every inch of the kind of river stretch that could turn out a real whopper of a chevin, what with its numerous holts and lairs, undercut banks, rafts, reeds and tangled scrub lined banks. Where the river passes through marshland, there the classic chub swims were so numerous that we were spoiled for choice, I imagined a bite or two in each and over the course of the day, a chance of a fish to finally break through the six pound barrier, a realistic target I have set my mind to achieving this coming year as my personal best for the species, a five-pound nine-ounce fish from the Severn caught three years ago now, is getting a bit long in the tooth. It has to go!

We started off right at the very bottom of the stretch where I fished a large pool above an old weir. There I had a couple of encouraging bites to bread but that swim never came along properly, so a move upstream was made to one of the aforementioned perfect chub swims. I sat down, cast out to a spot just above a small raft of rubbish accumulated in the low branches of an overhanging hawthorn, ten yards upstream threw in three or four lumps of 'liquidised' bread (a howling misnomer if ever there was one -- it's actually stale bread put through a food processor but without any liquid to speak of, in it) to break up and create the classic chub attractor of a cloud of particles slowly drifting and dispersing in the current. 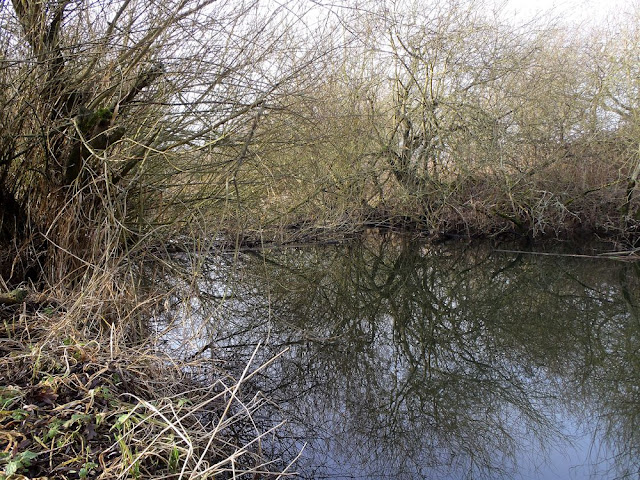 Twenty minutes later, the rod tip twitched and hooped hard over and the first fish of the day was on. I hoped it was a big roach, but no roach ever gives a bite like that, so it never could be. Sure enough it was two and half pounds of chub doing a convincing impression of a big roach by not immediately seeking the snags or trying to burrow under the near bank, but conducting its part of the bargain out in open water. It was a lovely looking fish though. A perfect young chub. 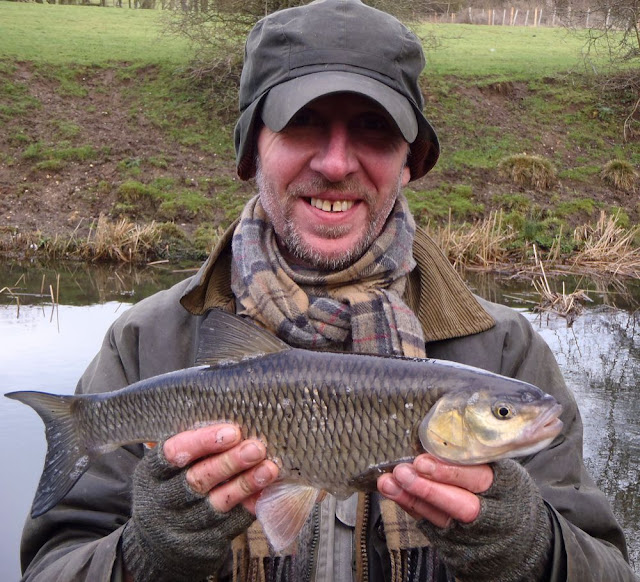 I thought the day could only get better after this, but after numerous swim hops we finally conceded defeat after enduring hours of fishing a seemingly fishless river, without the sign of any further fish other than that of an occasional minnow pecking away at my bread. For a while I hoped that these minnow bites could feasibly be roach bites but one was foul hooked so that brief illusion was quickly demolished. Martin, fishing trout pellets, never had so much as a knock. It was hopeless.

Various theories were broached about the absence of fish but Martin has experience of the fishery whereas I've only fished it twice as his guest, and now with identical results. I do know the fishery has been hammered hard by anglers fishing after its resident barbel, and like all small rivers treated to a constant procession of feet and a constant bombardment of baited hooks, its fish are bound to be extremely cagey about suspicious foodstuffs coming, or landing, their way.

I thought of Kickles Farm, the short stretch of the upper Great Ouse where so many huge barbel were caught just a few years back. Of course I never fished it, but I've read what it was like to fish and by all accounts the going was extremely slow indeed even before the fishery gained its place in history as the greatest stretch of barbel water ever known, and as a consequence became over-pressured and even harder to extract fish from. The immense angling pressure brought to bear on these fish was blamed for the premature death in 2002 of what was then the record barbel who died with an odd growth on its chin after being caught four times in the season prior to its demise. I also thought of Kickles Farm when Martin mentioned otters, the animal that ate the liver of 'The Traveller', another British record fish, and who was found on the banks of the Ouse with its guts torn open. 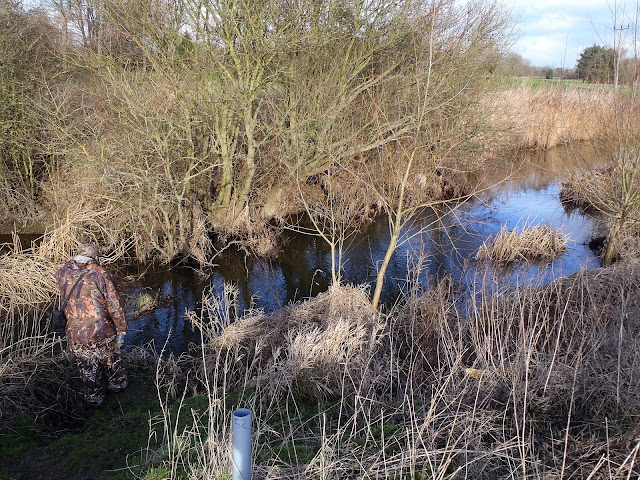 When Martin later found a handful of very large chub scales scattered on the bank of his swim, ones that would have once belonged to just the kind of chub we were fishing for, it seemed he may have had a strong case! It's one thing to be fishing for over-pressured fish, but quite another to be fishing for their ghosts...

My mind is split. I don't have the required experience of this fishery to be able to form any substantial opinion about it. Dog otters command enormous territories covering up to 20 miles of bank, which means that only a handful of otters must exist in the upper avon valley including the bitches and pups. An Itchen dog has been tracked by its spraint along the entire length of that rich river, which is an awful lot of water and fish to eat therein. That they eat all up to three pounds of fish a day would be of no consequence at all to the health of a fishery if they roam so very far. But, how far do they roam before moving along? Do they stay around places where the supply is high and consume there what they need before moving along to the next vulnerable stretch?

There's going to be a strict natural equation at work here. Energy expended in hunting must be paid back in fish consumed or the otter dies. It's plain that given an abundant source of food the otter will exploit the equation to its best advantage and gorge itself where the supply is high and easy to obtain. And then move along, but not before...

Oddly enough, the same natural equation is what drives us anglers to fish, always seeking large supply and easy gain, hence the phenomena of the commercial fishery crammed full of sucker carp. We obey this natural law even when we are seeking very big fish, where the return on expenditure in term of quantity can be very low indeed but extremely high in terms of kudos, which is of no importance whatsoever to an otter with its life in its own paws each day, but very important to us. Hence the vast tracts of fruitless time spent by anglers desperate to break the barbel record at Kickles Farm in its heyday. Hence the over pressure that I suspected was at least partly to blame for the apparent demise of the fishery we were on now! 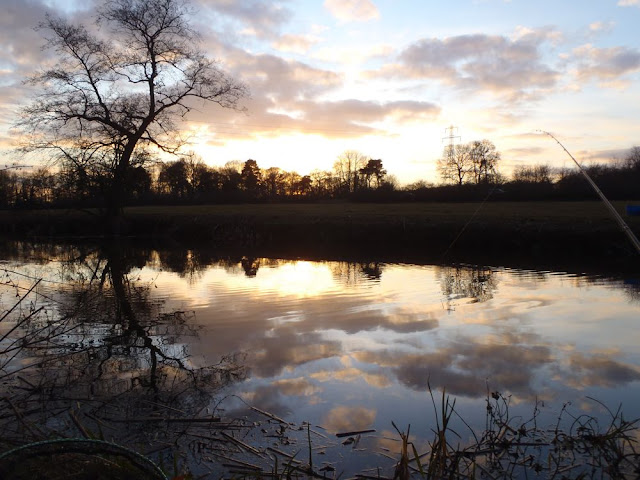 Whatever the truth of the matter, otters, over pressure, what have you, the equation needed to be rectified, and so we decided to depart and go fish somewhere for the evening hours where supply is high and supply is easy, otters clearly haven't penetrated yet and angling pressure is negligible.

Here the bites came before the bait hit bottom and I caught roach from the off. We had just an hour or so available but I put together a tidy catch including some nice fat dace. 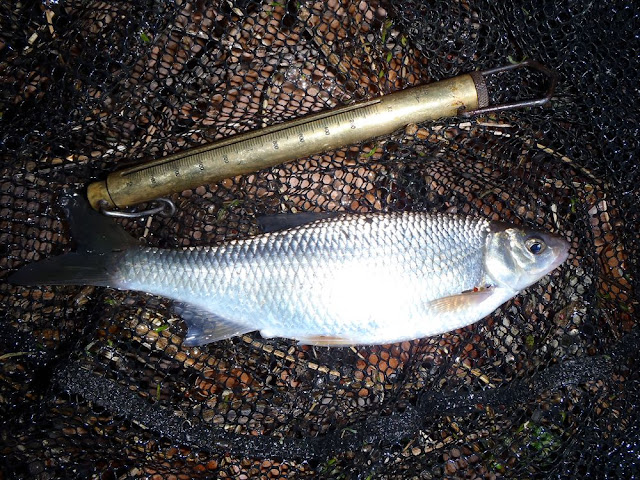 Then Martin, who was fishing half lobworms on ten pound mainline line, eight pound hook link and size six hook hung off the end of a floodwater strength barbel rod, because that's the tackle he had from earlier exploits and nothing lighter, came along to me with a fish to weigh on my roach scales, a big fat dace of half a pound.

Not exactly a sporting capture, but needs must. A new personal best for Martin too, I believe?

That's what you get when natural law is firmly in your favour!