The local canal is where I catch the odd fish that looks like a big roach at first sight, remarkably so on occasion, but who turns out to be a hybrid with bream and roach parentage. It's not like catching one of those rudd x roach hybrids discussed in the previous article, where the body shapes of the parent species are so very similar that a mix is really confusing to the eye. Most of the time with roach x bream hybrids the distinction is really obvious, with the majority of looking distinctly different from both parents. Though they have a mix of bream and roach characteristics, because the parents are so vastly dissimilar in appearance themselves, they look like 'hybrids' at first glance and are rarely mistaken for anything but.


Bream are really distinctive fish with their disc like shape and heavily compressed body, but the roach hybrids have a sleeker appearance without such a pronounced humped back and deep belly. They are never quite as plump as roach, and never quite as deep as bream, but because they can grow much larger than roach themselves, can be mistaken for very big roach when the fins are red, as they sometime are. They never can grow larger than bream though, or even approach the bream's maximum weight, despite hybrid vigour, because the roach genes in the mix limit the potential size.

Where we English tend to dismiss hybrids as curious, even unworthy captures, the Irish take hybrids very seriously indeed and have them on their record list. The Irish record for roach x bream is seven-pounds, which would seem to be about the maximum weight possible, and one that proves that the limiting factor is true, however the Irish record for roach x rudd, because hybrid vigour makes such an enormous difference where both parents have roughly the same maximum potential size, is an astonishing seven-pounds-ten ounces, which is more than three pounds over and above what either parent species have ever achieved there.


As I mentioned before, on my local canals, hybrids easily mistaken for roach are uncommon. The fish pictured above weighed a pound and a half, but I was fishing for roach at the time I caught it, and in a place where roach are known to run to two pounds and over. As it came to the net, I held my breath, because the fish's flank was enormous for a roach and I really thought I'd taken a fish to challenge my long standing personal best from the venue, however, the broad silvery flank was only an illusion of weight, not a fact of the matter. As with bream, the broad flank hid a compressed body with little in the way of plumpness to it, and so the fish was really half a pound less than I thought it might be. It wasn't a big roach at all, just a relatively small roach x bream hybrid.

The next fishes are what I would call run-of-the-mill R&B's. The normal variety of various roach x bream hybrids that I encounter where I fish. They are distinguished only by their very lack of distinction, being dull-looking and not nearly as pretty as roach, nor as handsome as big bream, having the natural attractiveness of each parent degenerate in the mix, them seeming to having inherited the worst traits, so we have the dull ochre/grey fins of the bream but without the anal fin's impressive length, with the silver scales of a roach but tarnished by the bream's genes, all of which adds up to a not very attractive combination, and lending them a charmless, pedestrian appearance.


The fish above, though as unattractive a fish as I have ever seen, is actually interesting. Its colour was insipid and its scales were tarnished, its fins were dull and pallid, its overall appearance was dejected. It was a sad looking little fish to be sure, but I took pity on it, as it was clearly a pure roach. The colour-blind would be fooled for sure. With the photoshopped addition of red fins I could easily pass this off as a pure roach and nobody would bat a eyelid, but it's not, is it? It can't be. Surely...?

Perhaps it's albino. That would make more sense than including bream in the equation, though I can't help thinking that another form of roach x bream hybrid is what it must really be.


Silver Bream are caught from my local canal when I can find them, as they are a rare wandering fish that appear only at certain places at certain times of the year, but sorting out which fish might be hybrids of both them and either roach or bream is difficult as candidates are even rarer than the pure fish themselves, as you can imagine, and don't appear very often, however, I have a handful of pictures of a few curious specimens that I always thought might be. The first was caught on worm one winter evening, but I simply accepted it as a pure silver bream then, not knowing any better having never caught a pure bred silver bream to compare things with at the time.

I thought for a long time that the fish shown above was a silver bream x bream hybrid even though my eye inclined toward a silver bream x roach. The lateral line scale count for a true 'silver' would be around 45-48, but this fish has a count of 50. It can't be a roach x silver bream though, because the scale count would be brought much lower by the genes of roach than the fifty this fish has, the normal range for roach being around 43 scales, give or take a few.

To be honest I couldn't see any bronze bream in it at all while my eye was searching for silver bream characteristics such as very bright and reflective silver scales, which it had, and the lateral line count more or less discounted roach in the mix even though I could see roach written all over it. Unless I was barking up the wrong tree entirely the whole time, and it is simply yet another form of roach x bream hybrid? I've caught three or four fish near identical to it now. If they are that 'common', then I suppose silver bream should be discounted after all...

The fish at top in the picture above is possibly a closer candidate for a silver bream cross. It was caught amongst roach but is not one of those. Its lateral line count is that of a silver bream itself; forty eight. It was similar to the previously mentioned 'small silver fish with bright scales' that had proven so confusing (and still are!) but this one was twice the size of any of them. It's good to get a mature specimen to work with as the true characteristics of the parents come out fully and are less confused by juvenile traits that most species display when very young, such as comparatively large eyes and bright untarnished scales.

The scales on this fish were bright. Almost like those of a silver bream in fact, though the picture of it doesn't really show it very well, but I assure you, it was brighter by far than the roach below. It's obvious from the picture of the one true silver bream on this page that they are unusually bright fish,  twice as bright looking as any other fish shown here and makes the poor bream alongside it look awfully dull by comparison. Their scales are immensely reflective of light which is why I hate to take pictures of them after dark when the flash of the camera simply whites them out in a riot of light bouncing off in all directions. Pictures taken in daylight cannot really convey just how bright they really, are but in the hand it's astonishing.


Underwater it's a different matter entirely, the brilliant scales being one of nature's most brilliant forms of camouflage, fuzzy mirrors which reflect light in all directions giving the fish an almost perfect invisibility in their surroundings. This is a common device used by pelagic fish living in open clear sea water, but also used by freshwater fish living in muddier waters, and it works just as well in such an environment. Roach have it, all 'silver fish' have it to a degree, but silver bream have it in spades, as their very name suggests. 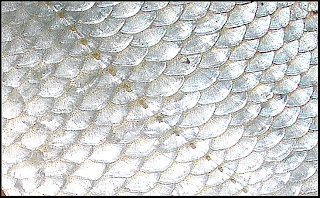 If it is brilliant, I have down any fish that is clearly not a true silver bream down as a possible candidate for a silver bream cross. The fish above is so much like a roach in general appearance that I can't see any bronze bream in it at all, but I can see silver bream in there, and especially in its rear half. The strong straight line from dorsal fin to tail fin is right (though bronze bream have this too) the anal fin length is about right, though shorter, and the general plumpness of the fish says roach, and because silver bream are far plumper fish than bream, silver bream too.

Is it one though? Or is it just another variety of the ubiquitous roach x bream crosses? Who knows?

I certainly don't. Finding a definite silver bream hybrid is like finding one brighter than usual needle in a very large stack of dull needles with some super bright needles thrown in to confuse things, there being so few silver bream about amongst such a large mass of roach and bream, that a cross with roach or bream is going to be super rare. Sorting out the candidates and even knowing what one would look like, are further complexities that add mountains of extra difficulty. They probably do exist though, indeed they must if roach x bream hybrids are so common, because they all, silver bream, roach and bream, spawn in the same places, and on occasion, at the same time of year.

It has to have happened. They are out there! One day I'll find the definitive article, and for once it'll be plainly and clearly what it is...