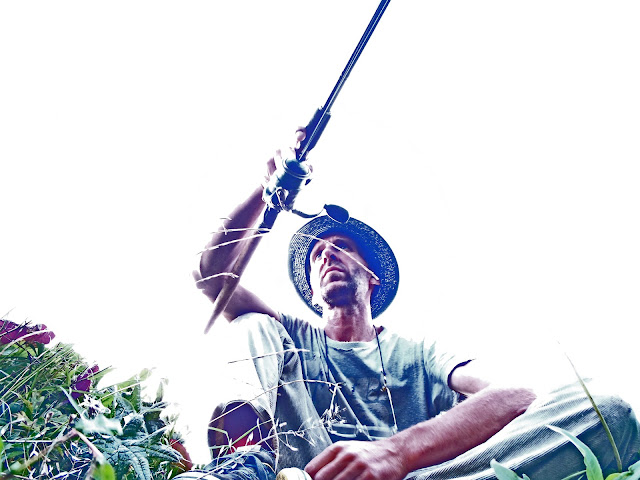 Unusual for me to spend so long in the one place when the itch to move is usually under my skin within ten minutes of not getting what I want from wherever I happen to wind up. It's a roach angler thing, upping sticks and off in search of new potential. I suffer terribly from it and simply cannot persist in fishing a swim I've lost confidence in. And that's especially true with roach where that crucial confidence can evaporate within ten short bite-less minutes.

Over the past few years I've observed that they're not like any other coarse fish because they cannot be enticed away from where they want to be. Sure you can move them a little to one side or bring them upstream a little but you cannot get them to shift into what they consider dangerous territory elsewhere just for food. That's not enough for them. They require safety too because they're fearful creatures given to picking at their grub at the slightest upset inside the strictly delimited zone of comfort they'll not leave for anything till leaving suits them.

I've also observed that their liking for a safe house means that for the majority of the time they'll likely be wherever we ignore. That is to say the blandest looking piece of water on the stretch, the one where the easily seduced angling eye doesn't dwell, wherever the fishing brain fails to register interest. If it looks like it'll have chub in it, that raft of rubbish caught up in a willow on a bend for instance, or it'll likely throw up barbel because of this and that and whatever, or is a lovely looking glide of smooth water certain to be a textbook roach fishing paradise, then it won't produce the desired quarry.

In my experience they'll turn up in the between. 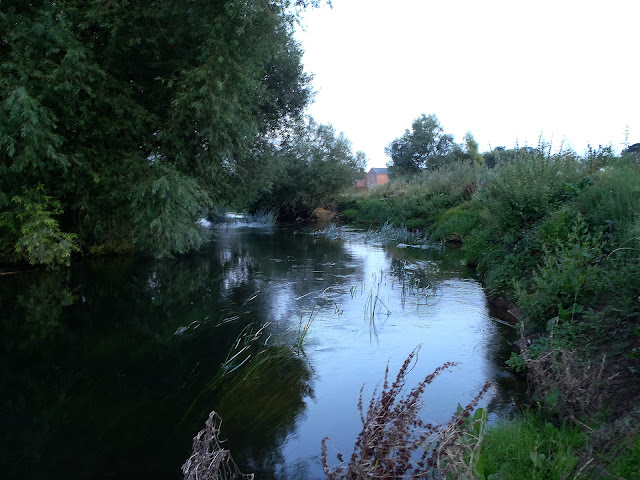 This particular stretch of river has had me fail singularly. I saw them once. It was my first session on the water in fact but I was stuck fishing meat for barbel while all around a shoal of large roach topped, and yes they had to be roach because no other fish would do such a thing in such a particular fashion on a river around dusk. It was classic stuff straight out of the big roach hunter's textbook. But that evening I'd committed the roach angler's first cardinal sin because intent on less demanding quarry I'd failed to pack the back-up insurance of a roach rod and half a loaf to fish with...

I never go to a river without that!

But that time I did and have sorely regretted it ever since because I caught no barbel that night and couldn't have cared less, couldn't hope to catch those roach but cared a great deal about that, have tried for them over and over in the meantime but in every swim that looked 'roachy' I've never caught a single one.

Great chances in roach angling come around rarely. One had passed me by. 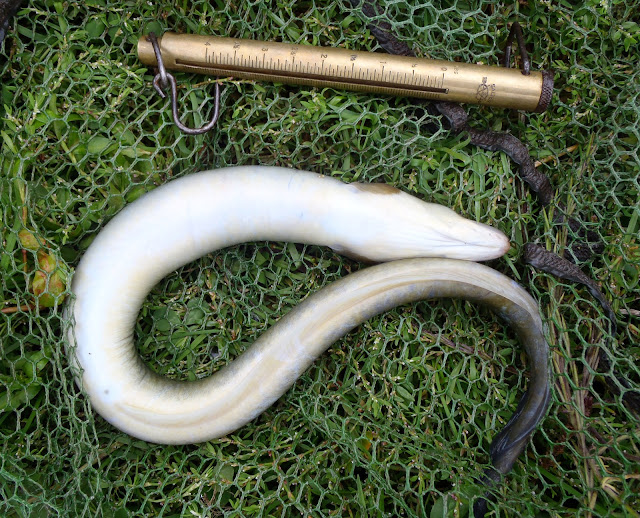 Day one
An evening session again after barbel. After a few swim changes I settled into a peg with little to recommend it. Looking like nothing much, just a piece of dull water between more attractive swims, it did have one salient advantage over the rest — a comfortable bank where I could sit on the grass and while away a few moments in restful idleness before moving to another altogether more testing peg further downstream.

I had plucks straight away so decided to stay. A savage classic barbel bite came and for a short time I believed that it was one it was so heavy and determined but when enough pressure was applied, I found a one-pound eel who'd merely wrapped itself up around a raft of streaming weed. It was hooked cleanly in the bottom lip but getting it out was still tricky, so I smoothed the belly to send it into a coma making it perfectly docile even when held upright. When put back in the water though, it recovered immediately — a remarkable thing. 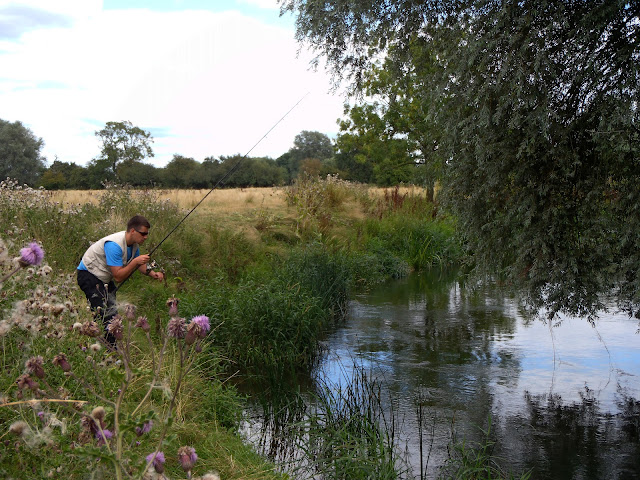 Day two
An excursion with James Denison up from London on a day trip to the Avon and him intent on rolling meat down the weedy gravel runs for a barbel. It was a warm day under shafts of bright sunlight showing bottom in three feet of clear water and about as bad as could be for locating roach but I persisted fishing ledgered bread in the hope of finally finding them out. Once again, after a few hops from here to there in search of roach bites but finding only chublet twangs, dace jangles and surprisingly vicious gudgeon twitches I wound up in the dull but comfortable swim where I'd had the eel.

When one was hooked sure enough it was, and though a relatively small fish of just five or six ounces, it was the first I'd had in so many sessions and cause for celebration. Of course I should have put it back half-a-mile distant, or packed a keepnet, but I plopped it back directly when I committed the second cardinal sin of roach angling.

Thereafter I could not connect at all because on the Warwickshire Avon returning a roach to the shoal almost always spells the end of your chances. The bites which had been quite confident considering the conditions became simply impossible and though I struck a hundred times over I never connected with one again. But at last I'd discovered them and as always, where I'd least expected to. Of course the reason I'd never found them before is that I'd ignored my own hard-won knowledge and overlooked the obvious. Roach are always found in the most boring water and failing to apply that rule here was how I'd committed the third cardinal sin of the roach angler.

After finishing up on the stretch James and I walked the near five miles to Stratford Upon Avon and fished Lucys Mill where I ledgered bread in one of my favourite weirpool swims. I had a predictable roach pretty much first cast and then a roach hybrid but then the swim died off and I struggled for bites. James float fished bread in my second favourite swim and had six or seven up to three-quarters of a pound. That was a lesson learned and I'd committed the — what is it now, four or fifth — cardinal sin of the roach angler. That of sticking with one way when another might be better. 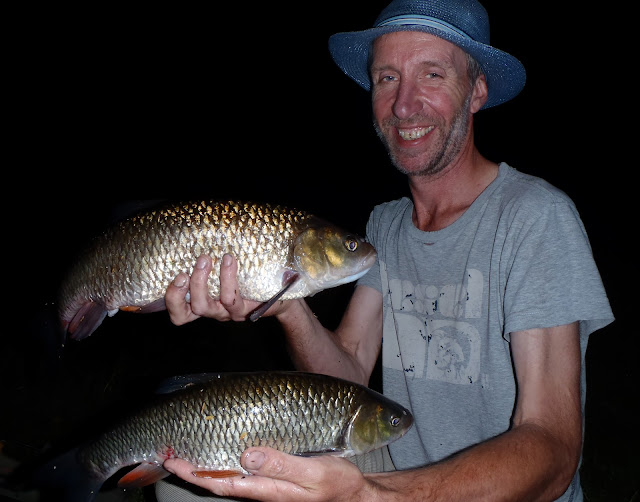 Third day
Consequently on the last day I decided to try something that for some unfathomable reason still remains to me a novel approach to roach — the textbook method of trotting bread after them. I've done it before but half-heartedly. Never really stuck at it because it seems so unproductive compared to the instant gratification of ledgering the same bait when you know within minutes beyond doubt if they're there or not.

First trot through and the float buries at the very end of the run through. A chub clearly— it segues from weed to snag to weed and back, so on and so forth. As they do. A nice fish of two pounds or so, but I shouldn't have brought it up through the swim. In doing so I commit another of the many cardinal sins of roach angling when the bank was clear and I could have gone down to the troublesome fish more easily than bring it up to my position disturbing the swim in the process.

Nevertheless the next fish is a roach. Then a dace and a gudgeon and another roach. They come from here and there but there's no line to speak of. Under the bank, down the middle, across the far side. Bites are few and far between as I expect with trotted bread but there's no pattern when they come. There and here, all over the place but nowhere in particular — I decide to feed to concentrate bites into a zone.

That was the final cardinal sin. The death knell. The balls of bread mash served only to bring in more and more chub (who seem to be my default species at the moment no matter what I try!) drive the resident dace into a frenzy midwater and together they forced the roach's noses out of the trough. They were never to be caught again. 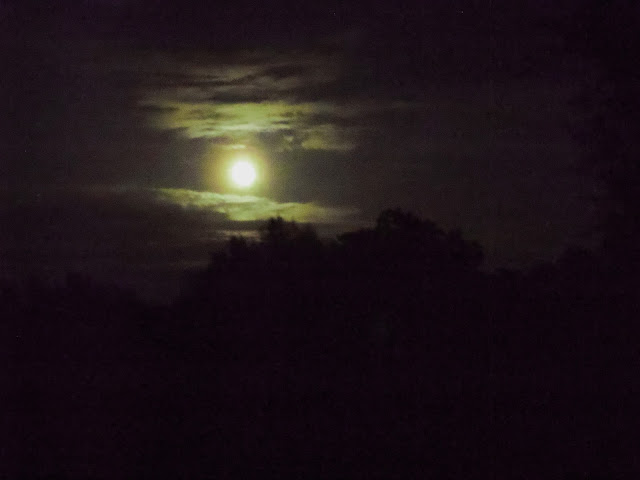