Catching chub on trotted maggots and trundled meat respectively but singularly failing to lure even a small one between us in long hours searching every likely looking lie, when we'd exhausted every last try, Steve and myself together agreed at a certain angling moment around 4pm that we'd now reached a watershed when a move really was necessary or in our quest for barbel we'd die on our sodden arses.

It had to be to another fishery entirely because by then we both knew this one to be a lost cause.

Making phone calls to friends he came up with a solution when pointed downstream to where they'd 'certainly' be found. First of all we had to find the place — and you'd never know it was there if you didn't have the information and was tricky to find even with it. A very steep hill to amble down and then likely swims to locate— a tall order on a stretch that looked at first sight pretty much the same all the way along.

Evenly wide, shallow and slow-moving there was little recommending one over any other, but working on pointed info gleaned from Steve's very generous tipsters then all what we had to do was 'walk to a certain point, cast right across, fish as close as possible to the far bank bushes and preferably right in them.'

Then, when we eventually found the spot, seriously, it looked no different than any other we'd passed by already... 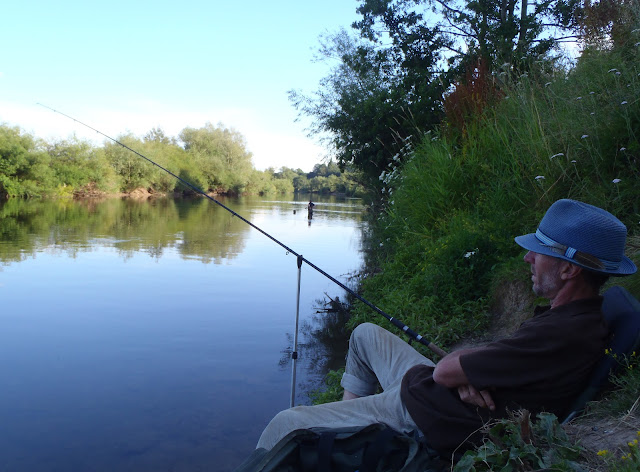 Steve donned his waders but I couldn't be bothered with that sweaty faff having worn them all day long and choosing to fish from the bank I left them to dry on the grass behind.

That gave Steve a clear advantage when it came to getting baits into position shortening the chuck by half, where I put myself at a major disadvantage by attempting to do the same from a distance of 60 or 70 yards which is not an easy thing with a cage feeder carrying nothing.

Falling a good twenty yards short I got a bites on meat, but when one was hooked it proved to be a very tricky 2lb eel who escaped the rim of the net by an inch of tail six times before I finally got it in. It was cleanly hooked in the lip (nice of it to be so obliging!) but off the hook it then escaped through a hole so small only a dace could have got through, but he managed it and slivered rapidly back to the water.

Steve had an early chub but of barbel there was no sign yet. Our cheerful bailiff assured us that when the sun set behind the hill and its shadow was cast upon the water, they'd come on the feed. He was dead right about that because just as soon as it did, Steve was into what we'd come for — a barbel. 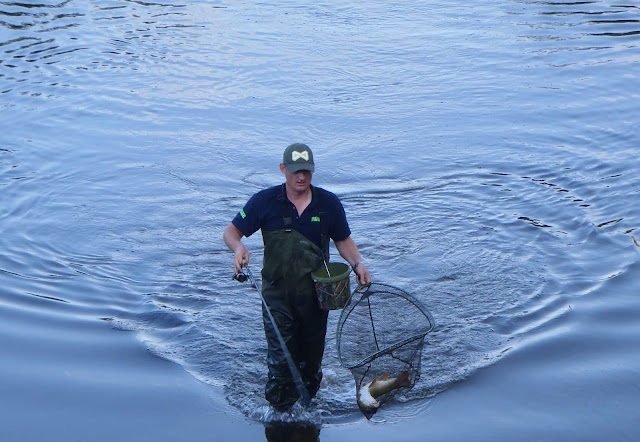 His bait was a boilie. So, I rifled around my bag and found some of my own. But they didn't work at all with not a single bite in an hour. When Steve then hooked his second and then third barbel I borrowed a handful of his magic bait (as you do!) and went back to fish more hopefully but fully aware that I was looking at a blank.

Just as soon as it hit the deck there was a pluck. Ooh — a blank maybe not!

A few cagey plucks later the cage feeder was replaced with a big fat two-ounce maggot feeder stuffed with crushed boilies and that missile was was easily flung within five yards of the trees. The rod sat still for two minutes, no more, before a twang and then a massive wrenching bite set me upon my feet, attached at last...

No way was I going to land this fish easily from my position with it now heading downstream hard and determinedly Steve's way, so of course into the water I went in rolled up trousers wading out to an altogether better fighting stance.

Then Steve had another fish on. Two's up was too good a chance to miss because here was a top notch photo in the making, so all we had to do was lose neither and it was in the bag. But I thought I would lose mine. This fish was crazy! Convinced I'd a double to contend with, I played it as safe as I could. But when I finally saw the bruiser was not quite the brute it'd made itself out, I piled on the pressure and finally, after a lot of vicious runs and a splashy finale, netted it.

Four pounds or so, it was just a puppy, but blimey could it pull... 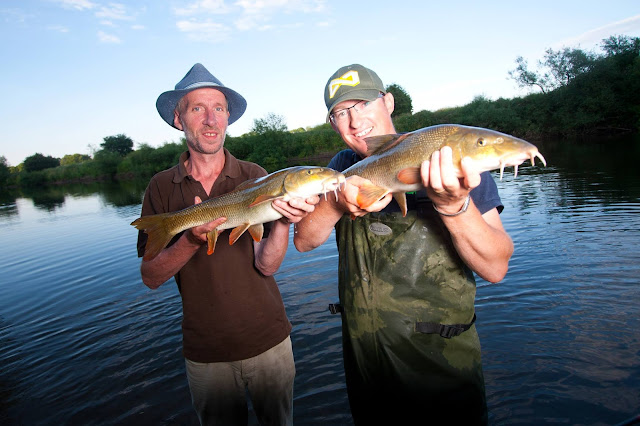 Well, we got the picture! And by the end of play we'd have a few more because on the magic boilies barbel were hooked and beaten again and again, Steve finishing up with six or seven before bites dried up completely as darkness approached. Myself fishing bank-side lazy style but having to get in the water anyhow, just a few between.

Steve won the pot hands down. A hard-earned and well-deserved result at mate's rates.

And then it was homeward bound but not before that bloody hill was struggled back up weighed down with waders I never used but really think I should have.