Avon Barbel — In Each a Sweet Spot

You know it's true. Every swim has one. There or nowhere. All or nothing.

This particular swim has a very precise one. 'The Hole' is what I call the peg. A hole is what it is. Or at least what it once was because on arrival I almost walked straight past it unrecognised. "Huh? Maybe it's not where I think it is", so I walk downstream and then upstream, finally deciding that something has changed.


The tree had gone. The tree that made life so very tricky in an already very tricky peg had vanished, ripped out the bank during the recent floods. The vertiginous mudslide down to the the waters edge was the same, though. Six unevenly spaced worn down steps pitched at treacherous sloping angles where the slightest amount of rain on the highly compacted clay creates a surface film of slip that might create a disaster should a footfall be underestimated. And it had begun to rain right on arrival...

Pitching the brolly at the top of the bank I set about two jobs. The first was to catapult a tin of sweetcorn into the head of the swim and have most, but not all, arrive at the riverbed approximately downstream of the sweet spot to draw barbel upstream to it. The second was to take a bank stick and as far, and as noiselessly as possible, create flat steps before I even attempted to fish because I didn't want to fight barbel off infirm ground.

When I had, I then noticed that where the tree had been wrenched away there was an area of muddy gravel right at the edge of the river that with a little quiet work would provide a nice little platform for me. Half an hour later, by prising away loose material from above and carefully compacting it underfoot, I had it made. I then set about having the muddy steps strewn with gravel and compacting that too. Job done, I had the fight to come set up on my own terms. 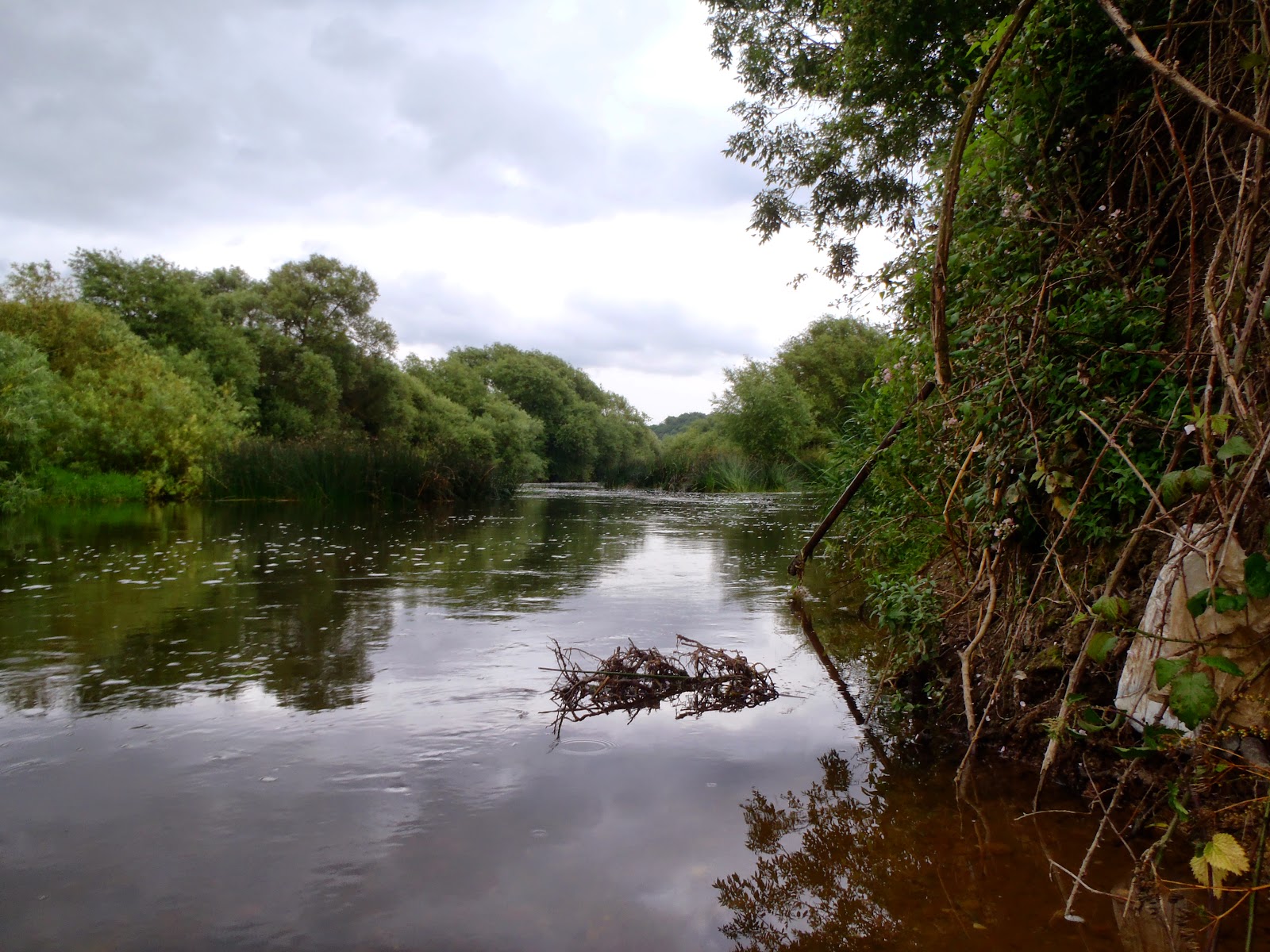 About that sweet spot though. On previous sessions I'd fished all over the river but gained bites only from a small area beneath some kind of weedy snag that I can only imagine gives fish a sense of security. Everywhere else it seems to be fairly clean gravel. Casting precisely to it requires putting the lead out and away and having the current drag it back into position. Get the shot wrong it falls too high and snags or sets down too far or too wide, left or right. Get the shot just right, though, and a bite is more or less assured. I guess its one of the many reasons anglers are called 'anglers'...

Trouble was, before I'd always fished up the bank to my immediate left, now I was fishing six feet down and six feet to the right of that position, so I had to find the sweetspot, or rather the weedy snag above it, all over again because all the angles were now different. That job took far longer than I thought it would and for a time I believed that along with the tree, the snag had washed away too. Then at last a retrieve held firm and when pulled free came back minus bait, the feeder trailing three feet of rotten weed.

Proper bites failed to come though. Curious knocks and jangles but nothing in the way of solid enthusiasm. I thought I'd cast about a bit and had a small chub take the corn bait on the drop, but that was it. The swim seemed a stranger today and returning to the sweet spot even that proved redundant. All those little jingles and jangles there the work of tiny chublets attacking the corn, surely?

Perhaps it was not so sweet after all...

But then I remembered how often I'd caught barbel after experiencing the same elsewhere. Lucys Mill, for instance, where one night a multitude of odd indications whilst fishing meat eventually resulted in a massive bite missed, then later still a very violent take and a twelve pound fish on the bank. All the while Martin sitting watching had had those 'bites' down as chub, and anywhere else so would I have, but from long experience at Lucys I knew that there's very, very few in the tail of the weir because I'd fished thousands of casts with bread with just one chub to my credit amongst all the hundreds of roach. In fact I'd banked more barbel on bread than chub — a two pounder and an eight pounder — an 'interesting' scrap across strong flow near bank on just three-pound line!

If they were from barbel there and then, then maybe here and now...?

There are usually plenty of chub down the hole but few barbel. I've never banked one from it yet, but once lost a fish I still hold to be one of the largest I ever hooked, anywhere. I hadn't had many chub today so working on the premis that the indications might actually be line bites caused by rooting barbel wary of three grains of corn on a hook amongst a bed of singles, I thought of scaling down hook size and fishing one grain only but I switched to meat instead and put it smack on target.

Martin arrived with the news he'd had a six-pounder some way upstream and would I come take pictures. Ordinarily I would have obliged, but, I just couldn't leave this cast behind because I just knew it would produce placed right where it needed to be and a simple matter of time before it did, and so I declined.

Sorry mate. It was the only decision I could make!

But it was the right one because twenty minutes later the rod top plucked, then pulled, but then...

B'Jeezus! The reel screamed. I screamed. The fish screamed!

No time to disengage the baitrunner I jam my finger on the spool and try to bring down the blistering pace of the creature. It works, but burns. Click. The handle turns, were on the clutch now, but it's still taking line. Just when I think I'm in trouble, as so often with barbel, it turns upstream. Could have pulled the rod into the sea if it wanted but now it plods toward me coming into shallower water with every flick of its tail. I think that barring another savage lunge it's mine.

It's not so very heavy. Not quite the 'sixteen' I'm fishing for!

I see it flash, then see it rise, and then carefully drag it on top and push the net under. A scraper 'double' perhaps, or a pound or so less...

Nevertheless, the swim had finally given up a barbel and one I could bank because of nature's removal of a major obstacle and early work improving my battleground. Of course now every bugger can and will fish it because it's now relatively easy to fish from. They still have to find that sweet spot though, let me tell you.

Because it's there or nothing. All or nowhere. 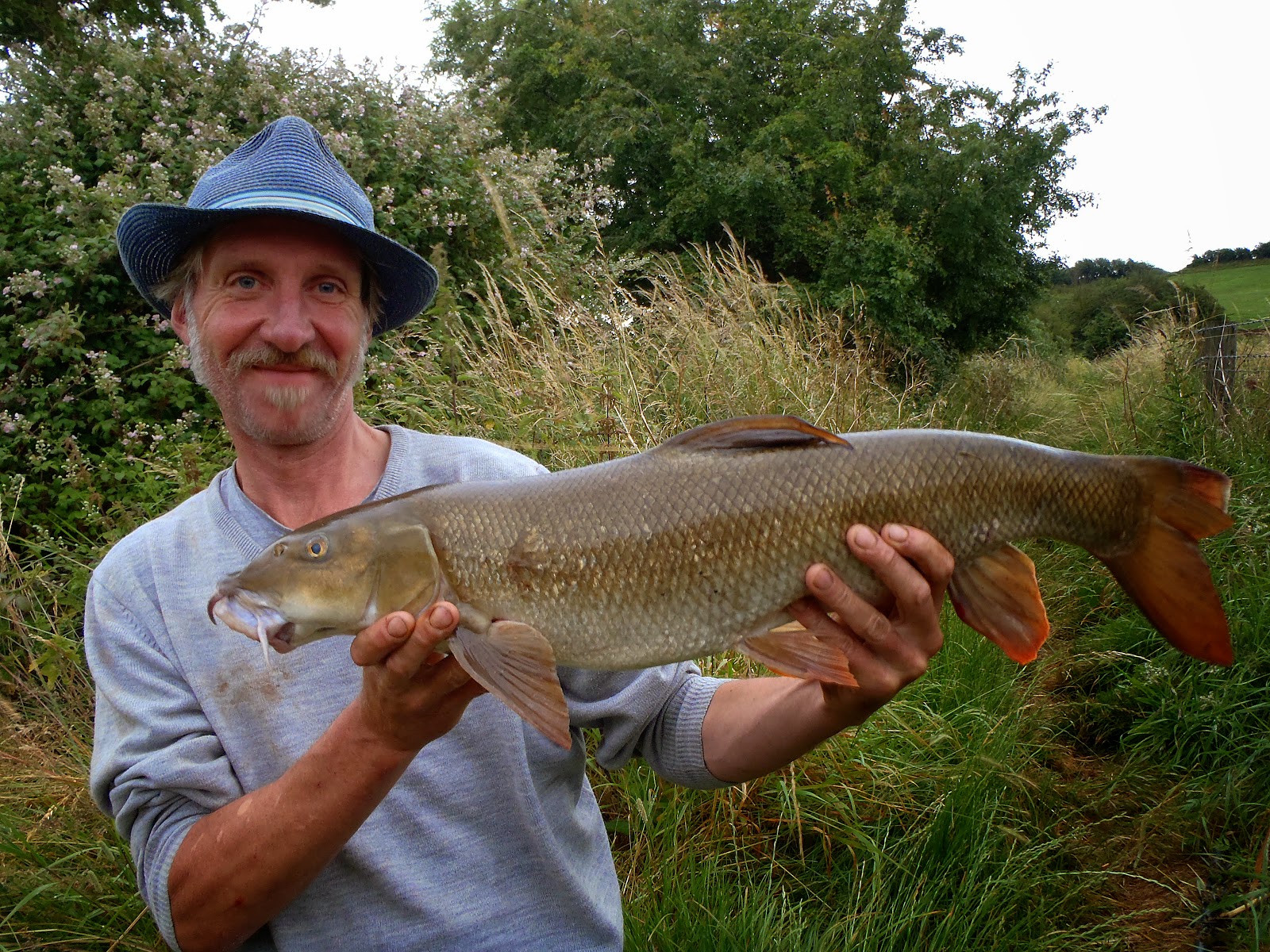