These are my weight length graphs for some of the species I like to fish for. They are compiled from data collected by myself and plotted against a logarithmic curve from fry and all the way to British record weight. The figures are as accurate as I can make them and show what the expected weight a fish might be when its length is measured, so a 2lb roach, for instance, should be around 14.3 inches in length on average. That a fish is often shorter or longer than its weight would suggest, or heavier or lighter than its length would suggest, is down to variations in body mass caused by many factors including the fish being ready to spawn and full of eggs or infested with parasites, or conversely, out of condition after spawning or very old indeed & approaching death when the fish will be very lean indeed.

Roach
The curve for roach suggests that the record weight is about the maximum any roach could ever be expected to reach in British waters as the curve at the weight for that fish is almost at the point where further growth is not possible, however, it has not quite peaked which suggest that it is quite possible for a roach to exceed the record weight should a fast growing fish living under optimum conditions live long enough to gain the length and mass necessary to surpass it. The curve suggests that it is possible, though not very likely!

Click on the graphs for a larger & clearer view 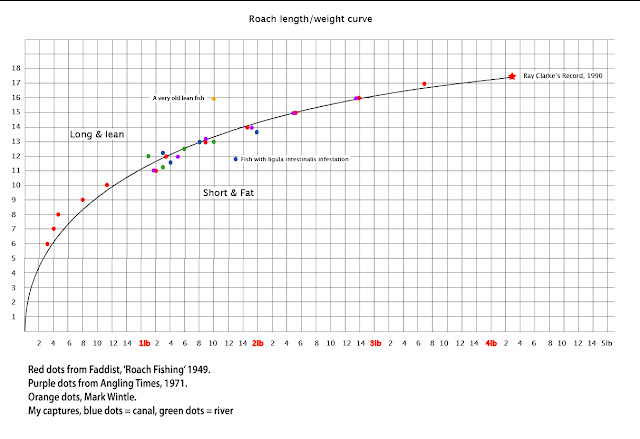 Silver Bream
The curve for silver bream seems to suggest that the maximum weight for the species has not yet been attained by an angler* and that a fish exceeding the current record is likely to be living in British waters somewhere. The curve has not peaked at the current record weight and could feasibly continue some distance, suggesting a maximum possible weight for the species at perhaps, three and a half pounds?

The two linked red dots are for a fish that was caught by Keith Jobling at 2lb 2oz in early April of 2010 and recaptured at the end of the same month at a much reduced weight of 1lb 14oz. Clearly, this was a female heavy with spawn when first caught but one spawned out by the time of her recapture a few weeks later. The considerable differences in its weight measurements are remarkable as she couldn't possibly have shrunk or grown in length by any appreciable amount over such a short time scale.

The red dot for the fish at 1lb 5oz is also interesting as this was a fish that had just spawned when captured. Its overall condition was lacklustre for a silver bream, a fish that in good condition has very bright scales indeed, and its girth was lacking. A week earlier this fish would probably have weighed as much as 1lb 8oz.

* Fish at claimed weights of 3lb 1oz & then 3lb 5oz have been caught since last update of this graph. They are yet to be verified as consecutive British records. 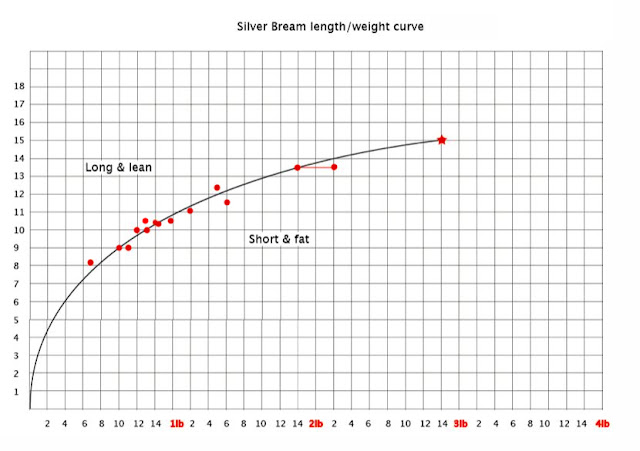 Dace
I have only just begun to compile data for dace and so the curve shown is something of a guess at the moment, but I expect this to change as more fish are caught and plotted on the graph. I have no clear idea of the possible length for a British record dace of 1lb 5oz and so the plot for that fish is pure conjecture and only based on the continuation of the curve derived from my limited data. If it is correct, then it suggests that dace heavier than the current record are possible.

With dace, hen fish full of eggs are significantly heavier than cock fish of similar length caught at the same time. A hen caught in July may show an increase of 30 percent of body weight by March. 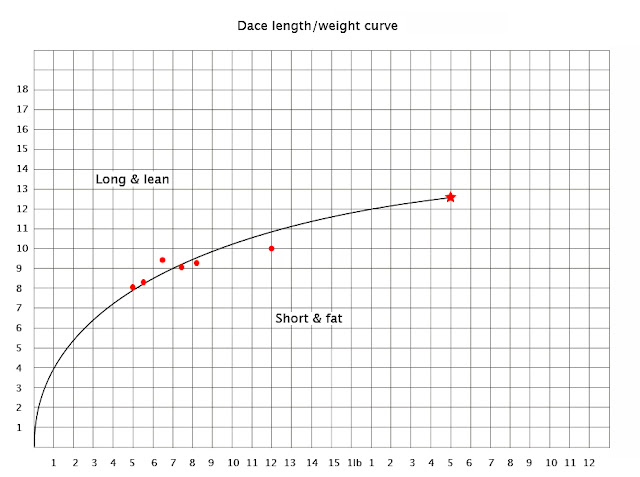