The Bad Angle on Boat Fishing

I think that the Blenheim trip was the first time I had ever been out on a boat and taken long rods with me and it has to be said that they were a real pain especially when it came to landing fish. The first problem that became apparent was one of space - the long rods (11 & 13 feet) when in transit had to be put out over the boat at the stern and bow and because of all the various bits of gear and boat parts they had to cross over the butts of the rods had to be well inside the boat so that they did not fall over the side. When rowing the oarsman needs clear space around the gunnels, space for his legs and a firm grip with the feet unimpeded by gear in the way. Long rods compromised all three.

The second problem was one of casting. The angles and drop of the cast mean that the bait and hook from the end of a long rod can pass dangerously close to the nose of your companion on anything but the shortest and briefest of overarm casts straight out front or back. Casting fore and aft is not so problematic as the bait would usually be off the side of the boat above the water and not the ends of it over at its starting position but still a great deal of care and attention needs to be exercised.

Of course things are different for both boatmates (assuming two right handers) as the casts are different in all directions depending on which end of the boat you're in but during the course of a day casting to all kinds of features from open water to tight to the bank casting becomes a kind of an assault course and you need to have your wits about you. The only answer is to reduce the drop of the tackle from the rod top but when float fishing in six feet of water or more, this is less than ideal and would require the use of sliding floats. Shorter rods still create all the same problems of course, and used gung ho are even worse if someone starts excitedly casting lures all over the place from within the boat when fish are really hitting the lures hard, but in a more directly controllable manner.

The third problem and most serious to my mind was the one of boating fish and especially large and feisty ones or in the case of Blenheim on that day, large and feisty prize fish. Here the problem of angles was really acute and though simple to understand is best shown by an illustration ~ 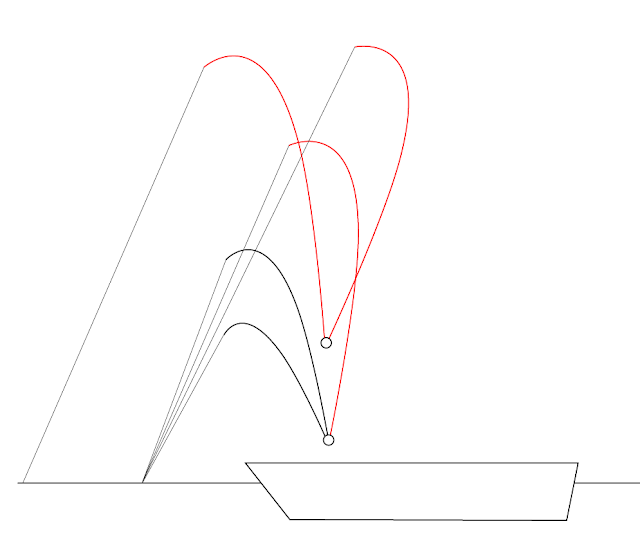 The red rod is the long rod ( the circle is the pivot point where the rod is held in your hand) and shown when used in both sitting position and standing position. Where the lines enter the water is a comfortable place from which to net your fish, not too far away and not so close to the boat that it might cause trouble by passing under the boat .

Keith had precisely this happen to him whilst landing a pike in sitting position off a long rod. It passed under the boat and came out the other side leaving him with the hilarious, but with a really good fish at stake potentially disastrous quandary on his hands. He had to pass eleven or twelve feet of rod under the boat and around the anchor chain - that he succeeded in pulling off this tricky manoeuvre was surprising, I thought he had no chance! But this didn't happen because of having the fish too close, it happened because of bad angles caused directly by the long rod and the mechanics of landing fish in a net.

The black rods are shorter rods, one at half the length of the long rod, say six feet and normal boat rod length at sea, ie, short, powerful and stumpy for fishing where little or no casting is required (start casting about with twelve paying customers aboard and the skipper and his mate will be on you like a shot!) and an intermediate rod that would seem to be the best compromise for inland fishing which requires you make longer casts and strikes which really, short rods cannot handle well.

As you can see all the angles with the shorter rods are more than comfortable at sitting position and you aren't going to need a great long net pole which like the long rods in transit, gets in the way and creates a monster of a weight to lift at the full stretch that the bad angles of a long rod create for the poor netsman who simply cannot reach out any further to make up the difference without toppling in himself.

The long rod however is never really comfortable in any situation and requires that the rod is past vertical to get the fish in the comfort zone in sitting position and when it does your line has entered into an angle zone that is less than ideal and one that the fish can easily take advantage of.

In a standing position, and when say lure fishing this is where you'll sometimes find yourself as you get more and more used to and adept at handling the pitch and roll of the boat caused by the wind & weather and in a small boat every slight movement of the occupants, the angles become really very bad indeed with the long rod, held way past the vertical and the line at an almost completely ineffective angle with regard to fish control, and with any sudden movement of the fish toward the boat resulting in useless slack line.

When Steve Philips and I went out on Hanningfield Reservoir we were using short spinning rods - we never had any problems that I can remember with either casting or landing, standing or sitting, and fighting extraordinarily energetic rainbow trout whilst in full control no matter how close they got to the boat.

Have the long rod at even its best angle in standing position and the fish is kept too far away from the boat and you then have no choice then but sit down to reduce the problem to manageable levels or enter into the danger zone by raking the rod backwards as you can't very well walk backwards as you would unthinkingly do on the bank in the same situation...

So there we have it. My thoughts on boats and bad angles. I know that next time I go out on a boat at Blenheim or anywhere else for that matter I will be taking my 9 foot wands with me and leaving the big poles at home where they belong. The fish are big and I don't want to lose one of them as either rodsman or netsman by failing to lessen the risk!