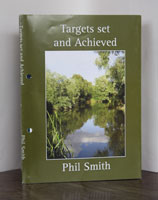 I've just ordered Phil Smith's new tome so I can go get it signed by the man himself at the launch on 17th of September
at the Lands End Pub at Twyford, Berks. Just working out how I can wangle the obligatory assuaging of the ire of the house fems who're bound to object if said purchase isn't handled softly, softly like...

D'ya think a well planned and executed off the cuff 'spontaneous' shopping trip to Stratford upon Avon will quell any later objections ?

And I can go roaching in Lucy' Mill while they're about it too.

Anyway, you might want to buy it yourself and support Phil's effort with your own ill gotten gains as I'll guarantee they weren't half as hard-earned as any money that finds its way Philward - writing a book is terribly hard work. I know, never having completed even a quarter of one myself.

BTW, this publicity is free and gratis. Phil has no idea I'm posting this but anyone who makes this level of effort to pass on a lifetime of tips and knowledge about the catching of truly huge fish is worth shouting about in my book.

Well done Phil. You deserve all our support.