What a difference a couple of days makes when there's not a degree of difference in it, eh?

Wednesday it was 13°, Saturday it was 13° too, but Wednesday the last gasp of Winter and Saturday the first breath of Summer. Same place, same swim, I thought we couldn't fail to bag one of those big rudd I'd convinced myself of...

It seemed we'd have a great day with them and though slow to begin with, things just had to improve in leaps and bounds as the brilliant sun in a cloudless sky teased them up into the top layers of water in search of food. This looked certain — it was an archetypal ruddy kind of day. 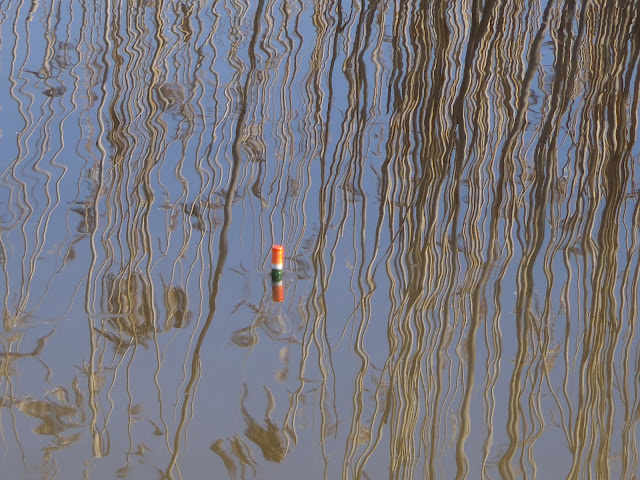 I began by drifting a dumpy float with the bait suspended a foot or so under and spraying maggots around it. This float doesn't often go under it's so bouyant, but it's visible at great distance. I concocted it myself specifically for rudd fishing and it works in a similar way to a perch bobber, that old fashioned float that no one uses anymore except for ironic effect in fishing films.

It was abandoned early on when I realised they were acting way too cautiously for it — where Saturday it would have been perfect drifting about in the chop and riding off sideways as rudd pounced on the bait, today in the film of a tranquil surface it was hardly registering bites. 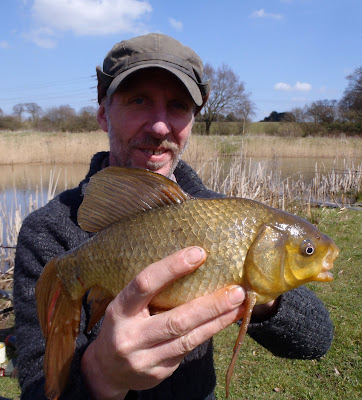 Things were so slow that I put out a sleeper rod to my left, tight to the reeds and fishing an enormous lobworm for the large perch the lake is rumoured to contain. It was off in seconds but the strike met with nothing. A little later it was off again but the strike failed to hook up a second time. When I finally did hook the culprit, it tore around just like a really big perch would so I thought I was in for a shock when it was finally beaten...

And it was a shock, but not the one of a huge stripy football of beligerence, but that of a floppy finned barrel of laughs — the brown goldfish!

I cannot take these fish seriously... who can?

But it was a personal best...

Martin fishing the pole was pulling in a succession of small fish but as the noon approached abandoned it as 'too tiring' on what was fast becoming a very slow day indeed. I soldiered on with my rudd fishing now that the worm float had caught what troubled it and sat dead still. 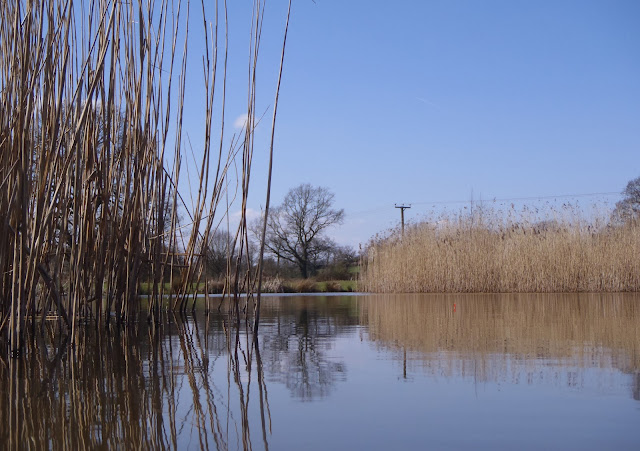 The trouble with fishing for rudd is it's a game of sheer quantity if you can't locate an isolated shoal of larger fish and the other problem with it is that they are possibly the most fickle creature that swims, so when they aren't biting hard you have no chance whatsoever of contacting a big one.

The strike met with the same 'clonk' as Wednesday's 'clonk' and it was through clenched teeth I gingerly drew what just had to be the biggest rudd I'd ever hooked toward the bank. It wasn't coming off this time around!

Then, a flash of golden flank had me trembling in my deck shoes... 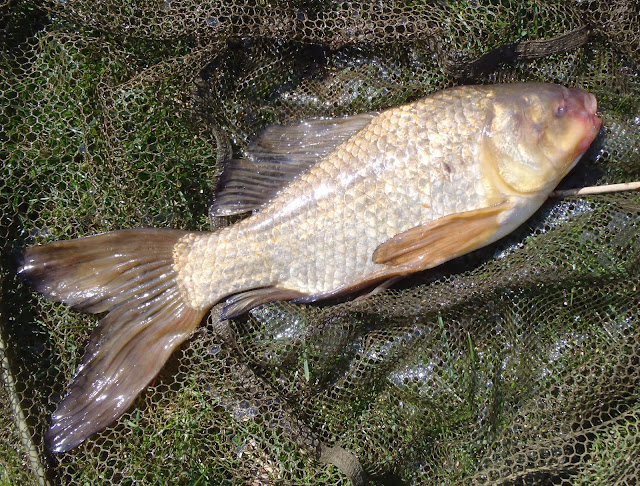 Blind in one eye, another of those ridiculous things caught earlier, and this the third of its type from the last three sessions and from different venues but never a single specimen in an entire lifetime of fishing before nowadays — angling is the most capricious of pastimes, don't you think? 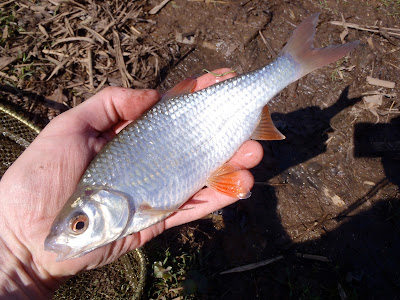 Noon came by and went and with it vanished the rudd. If you'd turned up then, as many anglers about that time did, no doubt flushed from their chores by the promising weather, you'd swear there weren't a rudd in the entirety of it.

All I had from thereon in were roach and even they were not exactly easy to find, one minute up in the water, next minute down. We persisted for as long as it took to grow tired of it and then packed down earlier than expected due to the fact that it had become a grind to fish on without prospect of improvement.


Perplexing is what the day was. The conditions might have looked perfect but were deceptive and far from it, in fact they were all wrong for the 'right gold fish' but just right for the wrong un's — but how on earth can you tell that in advance?

But it brought back memories of Keith Jobling and I fishing the same lake complex three years ago when he was chasing but failing to find brown goldfish for challenge points, as it now transpires in the wrong pond, whilst I was on the right pond without knowing it believing I'd found really large rudd ~


Amusingly, at the end of the year it was the only point on the scoreboard that no one had clinched!