Another crack at those canal carp seemed a good idea yesterday evening. Warm and pleasant for the time of year and with a little light rain forecast just after dark, not windy, overcast and the moon on my moon-phase widget a neat half-pie, I really thought that tonight would be the night. I had hemp to tempt the fish to get their heads down and stop giving me endless liners and a pocket full of Quality Street trick or treat left-overs from Halloween to make myself queasy on. Molly was up for it, I was up for it, and hopefully the carp were up for it too.

On the way down the towpath I came across what looked very much like a dead eel floating out in the middle of the canal, so I got a rod from the quiver and made it up so that I could reach it and bring it back to the bank for a closer inspection. It was an eel and pretty thick but at least half was under the water and out of sight so I scooped it out in the landing net for an even closer inspection and then managed, very delicately indeed and without touching the stinky thing, to get it into a carrier bag and weighed it... 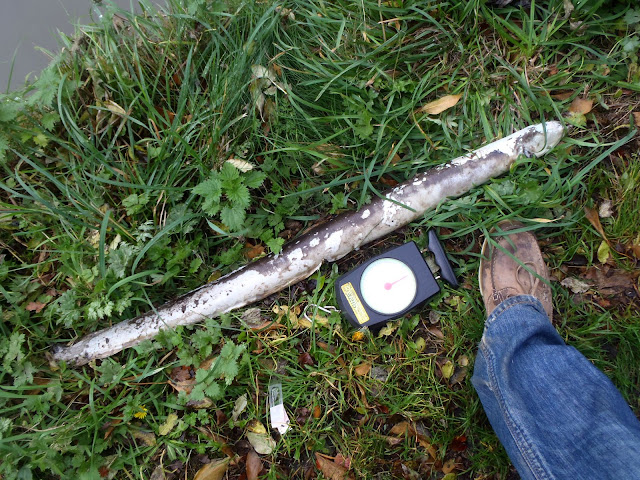 ...because I just had to know.

I see an awful lot of dead fish floating in the canal and am quite an expert on them now, being able to estimate where they died by the depth of their decay and the prevailing winds over the time scale of the decay estimate, so this fish died quite local to its findspot as it had been dead approximately a week and the winds had been more or less southerly since then, and because that meant, in this region, that the winds would have blown across the canal for about a mile in either direction and not along it, the water had not moved very far left or right, ergo, the eel corpse had not moved very far either.

With a strong westerly blowing a dead fish might move three miles around obstacles in an afternoon. Once, a freshly dead koi carp that appeared in the Coventry Canal one morning drifted in one day, a mile east, crossed through a lock and entered the Oxford Canal where it was seen the next morning a half mile down. You have to be both a daily canal walker and a canal angler (a nutter too) to want to understand the effects of wind upon them. Anyone else would never notice, or care, but the winds affect them so complexly, like no other kind of water you'll ever fish, that there really should be a Phd in it for me at some point. Honorary, preferably.

As for the weight of the eel. Anyone who can guess the exact score in pounds and ounces, wins a prize of a pair of my home-brew zander floats with attached star lights...!

Estimates in comments below or to my inbox at jeffhatt@hotmail.co.uk

Carp fishing was, as before, two daylight hours of nothing followed by liners bang on dark and well into the first hours before I packed up and went home. No fish, again. I did however meet another contender for the true source of the towpath tale that has been driving me along to this spot, Joe, an angler who I have met and fished alongside many times before. It turns out that he came along one night to drink beer and hang out with Spider, the relayer of most of the really accurate tales I hear and who lives on a boat always parked up near the marina entrance. He brought his rods along and cast out some stinky old boilies and to his surprise banked three fish through the course of the night, the best at eighteen pounds.

All fish fell to the right hand rod cast to a certain spot and on the same bait, the other rod fishing a different boilie to the left sat still the whole night. He had no liners whatsoever, not so much as a twitch all night, just rapid runs on a running lead, so having liners is no sign that there's carp around and so they are probably from bream, as I have always thought.

He decided to bike home and get me those vile old boilies so that I could have a go with them. One of the rods was loaded with the bait, Mainline Cell (in a mushroom flavoured glug), and a PVA bag full hung off the hook and cast to the hotpsot, which was also the place where I had a run and lost a fish last week. Molly took a shine to these boilies despite their rankness - but spaniels will eat goose shit if the fancy takes them - however, whatever a dog will eat carp will eat too, so I trusted them because of her interest. Nothing happened though. Joe stood with me watching intently and completely convinced that at any minute a run was about to happen. It never did. And the liners stopped too, the night falling still and perfect looking but all the charged electric air of expectancy of dusk had dissipated away leaving a blank a dead certainty.

Something however, took the place of the expectancy in my mind. The nagging feeling that the dead eel was the culprit of the lost fish and inexplicably broken line incident of the previous Thursday. By the time I'd packed down I'd convinced myself of it, as all the evidence pointed that way. I thought the eel had been cleaning up all the corn I'd chucked in as ground bait, had gorged the hook bait and then bolted against the lead, its teeth damaging the line above the swivel and the result being a cleanly snapped line without trace of failure, and ultimately, a dead fish who'd begun to rot in the warm water, filled with gasses, and then floated to the top to drift to where I'd found it, just two hundred yards distant from the scene of the disaster.

There's a reliable story circulating of another eel caught just recently, and that's the first I'd ever heard of eels in all the years I've been fishing the local cut. This fish was caught half a mile away, but because I don't know anything about the capture other than that it took a roach head intended for zander, I can't say whether it was gut hooked or not. If it was, and the angler had used trebles, then the fate of the fish on return was final. If not then it probably swam away unharmed, but there is the possibility, which is at least as plausible as my theory about that snap-up of mine, that this was that fish that I found.

Whatever the truth of the matter, and I'm not performing an autopsy to prove it one way or the other as I know from a boyhood experience that the stink of dead eels sticks with a man for half a lifetime, here are two eel incidents (or possibly three if it was a fish that simply died of natural causes) in the space of just a month on a canal where eel captures and sightings are pretty much unheard of. I've never seen a dead one and never heard of one banked, till now. Considering all the baits I have cast in that eels would certainly take, the lobworm and roach dead baits especially, it has always surprised me that I have never yet had an eel, but here they are, appearing all of a sudden.

Now I don't know whether to fish for carp or fish for them! The carp fishing is not exactly going to plan - so badly as it happens that I might as well fish goose shit than corn or boilies - so the next report may be the beginning of a new series of long-winded eel fishing blanks...