Another two four hour sessions after the Cov Canal carp come to a close without result. The first was a late afternoon into darkness affair and was interesting in that there were no indications of fish at all the two hours before dusk and then as soon as the auto night-lights on the indicators turned on in the half light, the bobbins started to twitch every now and then and the frequency of these 'signs' rose as night came, culminating in an seemingly endless series of full scale liners. One of the baits was brought back into the boat channel where the liners were obviously coming from and then just before I had to go home, a had a three inch twitch on that rod that on examination of the slip-shot behind the lead was seen to have been a real pickup as it had slid back an inch as the fish had bolted. Why the hook had not found hold I have no idea, but perhaps it was just a small bream? 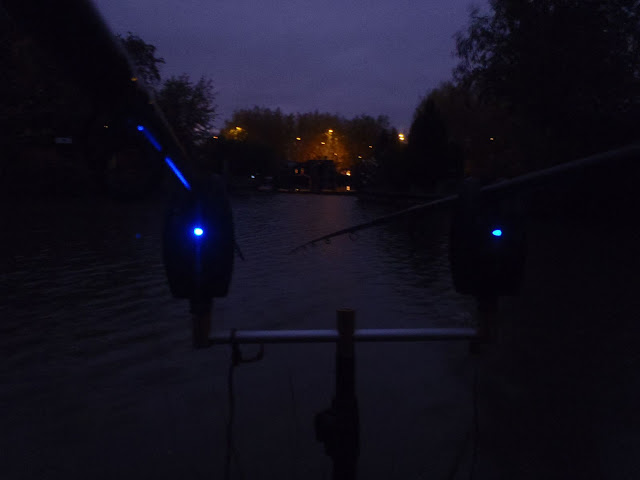 This morning the reverse was true. The two hours before first light were barren but as soon as the auto lights turned off as the light came up, the twitches started and a hour later I had a series of full scale liners. This time the bait that was brought back to the track received a big butt ringer followed immediately by a oversized drop back of the bobbin causing a bow of excess slack as the lead was moved back toward me, a bite that had to be struck but there was no fish hooked. On examination of the slip-shot, it had not moved even a millimeter so it wasn't a true bite but at all but only a massive liner. Again, this all could have been bream activity but whatever it was that moved the lead was moving quickly... 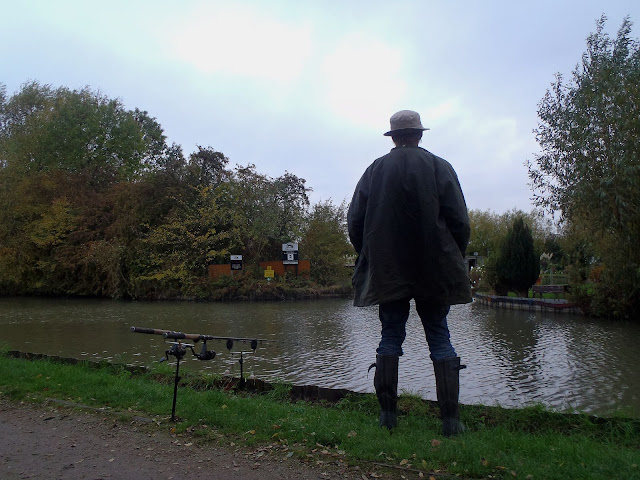 Carp? Well I have seen carp moving around in mid water here, and I don't think they exactly hug the bottom when they patrol so some of the liners could have been from them, but I'm really not sure. Will I be going back? Well, despite the 16 hours so far spent I have had what I would call three pick-ups, one proper run leading to a lost big fish of some sort, and too many knocks and liners to count. If it's bream that are giving me the gip then they are very clever bream indeed as not one has tripped up and they usually do so it might be down to carp or tench, so yes, once or twice more just to get past the full twenty four hours as the weather is warm, then I'll call time on these carp till next spring.

The Slip-Shot Rig
Before I go I think I should explain this 'slip-shot rig' of mine before anyone calls it a 'slip-shod rig' and accuses me of being a madman who willfully damages his line by having shot sliding up and down on it when fishing for fish who would certainly show up any weakness in it. Let me assure you, I'm not mad...

I'll take a foot of spare line off the spool I'm using and crimp the shot on really hard, then I grab one end in my hand and the other between my teeth and then force the shot up and down, recrimp and do it again until a groove the same diameter of the line is worn in the shot. The shot is taken off this damaged  foot of line and crimped on the line in use and just above the lead.

This creates a true semi-fixed bolt rig with a non-line-damaging stop for the lead that will slip just slightly against the weight of the lead and the speed of the run and show the difference between a suspected pickup and a real one and without ever damaging the line. Other types of bolt rig cannot diagnose bites for you but this one can - important if you want to know what's what when faced with difficult fishing. Also, if you want to give the fish an inch, two inches or six inches before the slip-shot hits the lead then crimp it up the line and measure how far with an improvised ruler of some sort, then you'll still know what was and wasn't a pickup.

If the whole rig is ever lost above this shot and a fish is left trailing the lead then the shot will work its way off very quickly just by the lead being dragged along and over small snags. I don't think the same can be said for the so-called 'safety clips' I have used and discarded as dangerous, especially as a little bit of gunk inside the rubber sleeve dried hard will set like concrete, and even forcing the rubber on a little too tight will render it a death rig. I just don't trust them to do what I know the slip-shot rig will always do. Too many variables for my liking.