The manuscript is complete, printed and heavy in the hand - most satisfyingly weighty in fact, these 226 pages of A4, single-sided, double line-spaced, thick-margined, 12pt Roman typeface. Now comes the crunch - other people get to read it and that is where I'm sure the fun really starts! 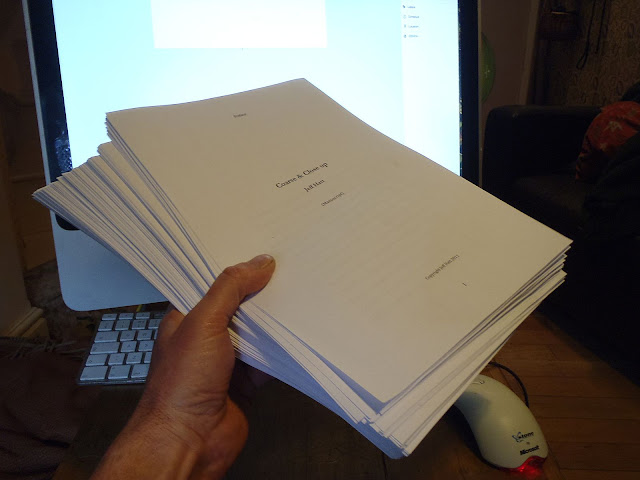 Judy cracked last night after refusing to read a single word whilst the draft book was in production, and read the preface. I went downstairs and drummed my fingers whilst sloshing some oily red wine around the rim of the biggest glass in the house and enjoying a panatella or two. Quite 'flowery' but 'enjoyable nonetheless', was the verdict.

Hmmm.... flowery. A garden of rampant verbiage to be pruned back then. Still, 'enjoyable nonetheless' was far better that the 'barely readable' I was expecting as I always have always found writing the first paragraphs of anything longer than a blog post, tougher going than the rest put together.

So then I read the preface myself, and it was quite flowery and then chapter one following on, which really wasn't flowery at all but in contrast, minced no words and got straight down to fishy business. I was surprised that there weren't more glaring errors than there were, because the thing on the screen never reads quite the same on paper, in my experience. Paper is brutal, screens forgiving. I quite enjoyed it, I have to say, though viewed through vin rouge goggles, that's hardly surprising...

This morning the fat thing is sitting there awaiting an envelope and stamp, as it's off to the copy editor with it. Bob Roberts, one of Britian's most famous and recognisable angling stars, has very kindly offered to do me the great favour of tackling this laborious job, and for free & gratis. I have in return agreed to do a little something similar with the manuscript of his book when it is done and dusted.

Bob, for those fishing for sprats out of a hermits cell on the farthest flung islet of the Outer Hebrides and who may not have heard of him, is a man with vast experience of the entire business of angling publishing, having written & created countless articles and works over a career spanning decades, and who was once the editor of Advanced Carp Fishing and also Secretary of the Angling Writers Association. It's going to be an honour to have the manuscript ripped into shreds by someone so very experienced and capable and though the criticism and outright devastation he may well wreak upon it will, of course, be a hard thing to face up to, I wouldn't have it any other way. It has to be bang-on-right, if it's to be fit for its intended purpose which is to be a seamless and enjoyable, provocative, stimulating read that people are glad they paid good money for.

And Bob is a good gardner so expect those rampant flowery borders tamed, trimmed and ship shape!

The other night, Phil Smith, another of Britain's most famous, experienced and well-loved anglers, who usefully lives just around the corner to me, dropped by for a chat over a hot CPU. We had the book open on the screen but got to talking about just about everything else but the book, which was a great relief as I took that as meaning that the layout looked fine as it stood and that other things were more worthwhile talking about -- like angling blogs, and how to make them work better than they do already, which is a subject close to my heart.

Our Mr Smith is an angler with a personal best captures list to cry for. One that makes my own look like schoolboy's efforts. He's published many books in the past, has just published another, has hundreds of published articles to his credit and has fished just about everywhere worth fishing in this country for his subject matter, which is the biggest of all possible big fish. When Phil opens his mouth, an angler-wannabe-writer better listen up! As it happens I devoured every second like a greedy rooting pig as this was what is nowadays called 'mentoring'. Mentoring is when a famous angler comes around and drops hard earned wisdom into an upstart's brain case. At the time I didn't recognise them for the gold they were, but I keep finding Phil's little nuggets everywhere.

Joe Chatterton has kindly offered to take up the task of proof reading, which is the task that befalls the one who wants to go through the proof copy of the book as it comes from the printers and then diligently weed out every single tiny little error in it, and without missing a trick. Hardcore work is what that is. Commas in the wrong place. Needless full stops. Typos, grammar, syntax, basic spelling are Joe's job to do. Where Phil stands at a critical distance, Bob cajoles and suggests, Joe, he demands. At Joe's stage the book is one step away from going to print. Nothing must be overlooked. There's no way back after this and all the investment rides on impeccable thoroughness...

In Joe I trust. He can't read anything without immediately picking up on all the devilish detail of grammatical error, without which he would read along comfortably. That's a natural born proof reader, I'd say!

Ok. That's enough name dropping for one day. Once the thing is off to Bob there's no way back. No way at all. Once the stamps are licked, the parcel sealed irrevocably, and the post office counter matron dumps it in the mail bag, this business of a book is already far too far along the way to retreat from -- it's all, or nothing at all.

And is it good enough to read? Can't say, haven't read it yet -- others must be the judge of that. All I can say is this -- without the help given so freely and honestly by the above mentioned I wouldn't be half as confident, or nearly as scared, as I am right now.