Grassy Bend is affected by the worst oil slick I have ever seen on the canal - some worthless turd having seen it fit and proper behaviour to pump out their bilge straight into the cut. The wind is keeping it concentrated in the bend and I guess it'll slowly break up and disperse over time but in the meantime, its disgusting stuff. I don't think it affects the fish down deep until it does sink and so I fished way off to one side of it in clear water. 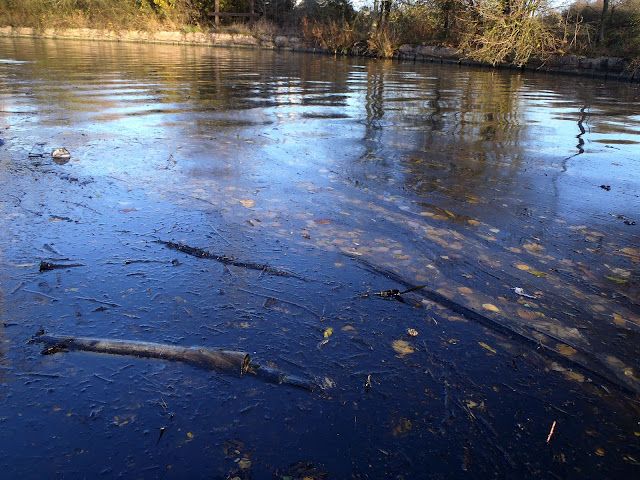 Once again the bites failed to materialise but at least I had company with Joe, the stinky boily provider, keeping me entertained with his towpath stories about 'Spider the Cider', a local character who gets blamed for everything that goes wrong or missing up the cut - not surprising the BW official who came along to see the slick, and who hates Spider with a comical vengeance, pinned it straight on him! Without any evidence I might add, just on reputation alone. Molly was also making a nuisance of herself as usual and would have dived straight into the worst of the slick after a floating coconut if I hadn't pulled her away and distracted her with a drinks bottle to chase. 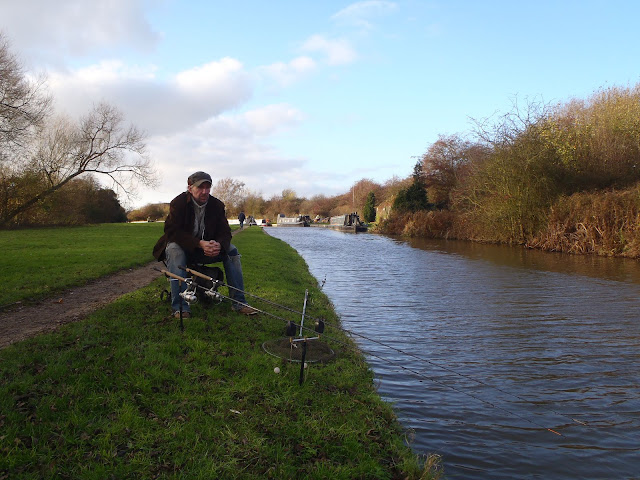 It was really bloody cold when the wind picked up later in the evening. It's not getting any warmer is it?
I've had most of the biggest roach out of holes in the ice so very cold water is no deterrent to them, but wind driven coldness is far worse than any amount of still-air borne coldness no matter how far the mercury plummets, I find.

I was going to pack up as the buzzer's automatic nightlights turned on at dusk but then a large roach rolled right over the hemp groundbaut, and then a second a few minutes later, so I stayed on till dark as seeing roach roll is such a rare event on the Oxford canal. I needn't have bothered as no bites came my way. 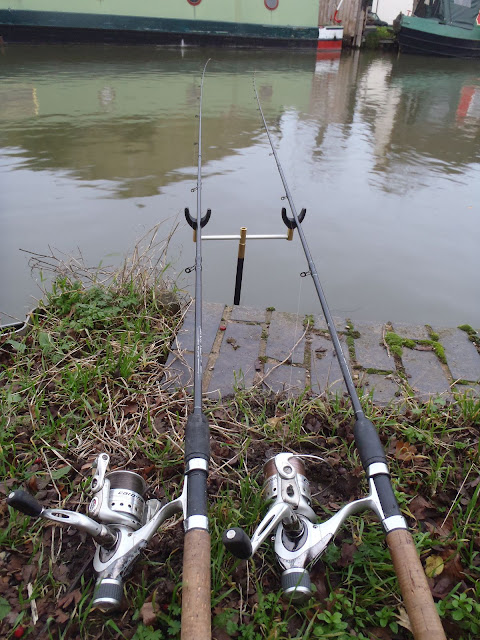 Then yesterday I thought I'd get out around the corner from home for a couple of hours as the weather by early evening was nice and still and the predicted rain still hadn't turned up. I sat down, cast out and enjoyed half an hour of peace and tranquility watching quiver-tips instead of bobbins and then the predicted precipitation did roll in and I had to resort to my emergency/comedy cagoule to weather the worst of it. 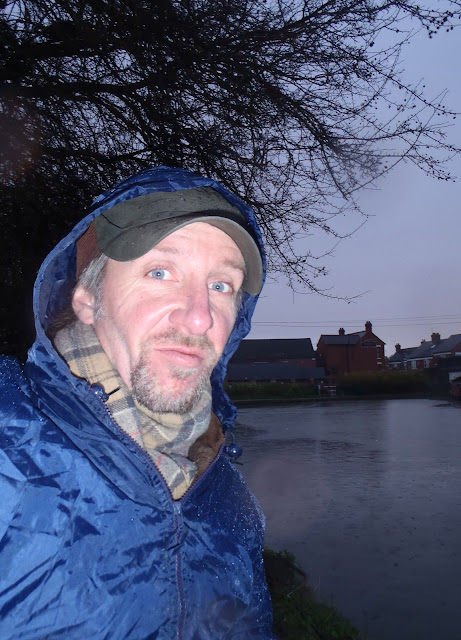 Stylish Eh? I wouldn't have minded but then the roach started rolling right under my rod tops, and some of these boils were from really good fish indeed. Normally rolling canal roach means imminent bite and I'll always cast straight to them having succeed so many times in the past in that particular trick. I was on tenterhooks, despite the freezing rain, but it seems that right now rolling canal roach means nothing of the biting sort and for the second trip in succession those rare, rare signs of fish out front, which only happen once in a blue moon up the cut, came once again to nothing.

Good grief, I haven't caught decent fish in what seems like months. Then again, If I will pick hard targets to hit, like early winter canal carp and elusive two pound roach, I don't suppose I deserve to.