Canal Roach - Ronny and Reggy on My Manor, and other Tales of Hope & Woe

The trouble with blogging about angling is that any angler's blog is, at a basic level, a diary for the blogger to scan back through from time to time in search of archived information. They are just the most effective means I have ever come across for such a purpose as Google's Blogger kindly gives us the means, in the form of various clever sidebar widgets to index and re-access the information at light speed. For instance, I have been beating myself up over canal roach over the last few weeks and so I wanted to compile a list of all the captures of said fish made over the life of Idler's Quest, which is exactly as old now as my Midlands angling adventures because I started both at the same time when I moved up here from London in 2008. It was easy, and most enlightening.

To return to 'the trouble with' bit before I get sidelined by roach stats, the blog also functions as a means of information relay to, and general light entertainment for, the public. They have an audience these blogs, and like all audiences, this audience (that'll be you!) demands some level of quality and every now and then a fish picture or two. Trouble is, what do you do if, a. you need to enter all the blanks as diary entries for the first mentioned requirement of it being a complete diary of days, red letter or not, and b. also be entertaining?

You could ramble on about how crap the fishing has been but there's limits to how long that is going to occupy anyone's attention span unless the blanks be the kinds of blanks one experiences fishing a five hundred acre pit stalking a record carp, say, when the quest itself might be so interesting that failing time after time is not only what the audience expects but forms the backdrop to the final capture, if and when it ever comes. But fishing for a roach of two pounds on the local canals, no matter how much of an achievement finally nailing one might be, is not quite fishing at that level, is it?

To get the diary entries out of the way it will suffice to say that Lee came over the other night for a crack at Grassy Bend, but the oil slick, which was confined to the corner by wind on my early arrival spread out all over the place when the wind fell to nothing and invaded every useful swim. I did set up and fish before it got so far, starting off nicely by throwing the short end section of my landing net pole in the water as I carelessly extended it. Rolling up my sleeves, I tried to fish it out with the net but it had disappeared too far out to reach without a pole. 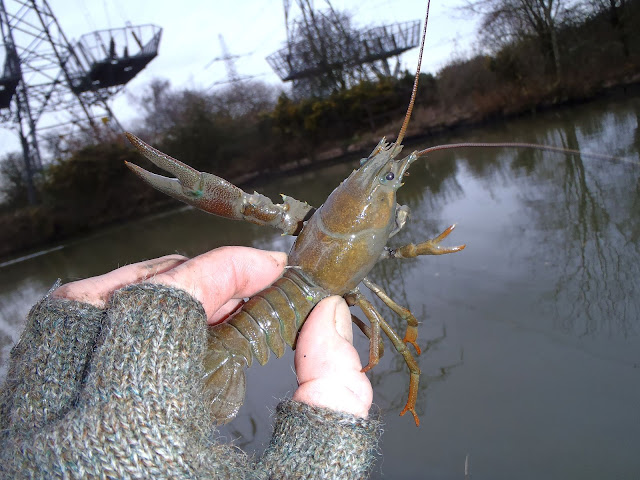 The net did, however, pull up the first live signal crayfish I have ever seen on the local canals, which was a depressing find made more depressing later (the net was attached to a spare bank stick by then) when a jerky little bite was missed and the recast brought another identical bite that resulted in a much bigger cray than the first. This will change everything about these canals - things are never the same again when these blighters move in to a fishery. The only benefit is that the perch, because they like to much the little ones whole, might pile on some much needed weight eating all that top grade crustacean protein as they rarely get big enough to bother with around my way 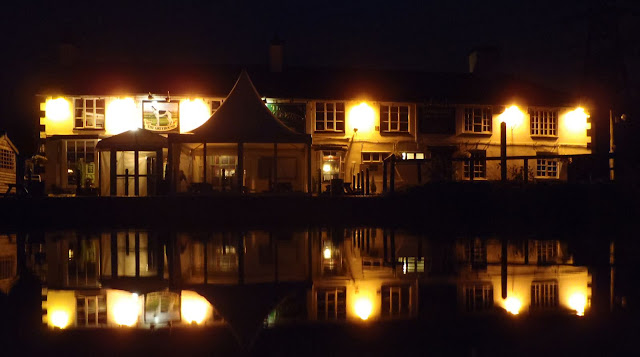 I went up to the pub to meet Lee at five thirty and we went and fished Longford Junction instead, which is just around the corner from my house, where we both blanked in the dark. The junction saw me again yesterday evening for a couple of hours into dusk, where I fished bread punch and had two bites in the only bit of calm water in miles, but poisson? Nada.

Back to the stats.

I made up my list on another handy Google thang, the Google Docs' spreadsheet, which can be pasted straight into a blog post and which automatically updates live on the blog every time you make a change to it in Google Docs. Nifty.

I hadn't fished on as many occasions or caught anywhere near as many roach as I thought I had! Only 35 over 53 roach fishing sessions in three years which is a depressing figure when one considers that I've caught nearly as many roach of the same stamp as these canal captures from Stratford upon Avon in just six trips. It's a rock and a hard place, this canal fishing lark. If you lived right next one though, and you knew full well that two pound roach were swimming about in it somewhere nearby, then believe me, you would fish it, and the quest for one would shove a knackered landing net pole right up your fundament too, driving you just as loopy, as Yours Truly.

There is some comfort in the figures though. I catch half the time having blanked only 27 times (I thought it was more) and the overall average size is wonderful. Even with all the half-pounders included it's an impressive 15 ounces. The first apparent truth is that maggots are the worst bait possible for canal roach as they catch small roach infrequently amongst a plague of sub-decent perch. The average size of a maggot caught roach is just 11oz, which is still quite high for roach but only what you'd expect on any good roach fishery.

The average size of worm caught fish is really impressive though, which is exactly why I'm prepared to spend long blank hours with them, because at 1lb 2oz I very much doubt there's any better way to ensure that big roach, and big roach only, are caught. Then look at the average size of Grassy Bend roach, which were all worm caught fish, and sigh at the average weight of them - 1lb 7oz! Of six fish caught, all have been over a pound, and half of them over a pound-eight. I doubt there is anywhere else in Britain where the roach run so big on average as they do there and every bite I have my heart in my mouth expecting the unthinkable. The near miss 'two' was a young fish that is probably a two and a half pounder by now and there doesn't seem to be any small ones there at all! No wonder that I'm prepared to spend even longer blank hours on that sweeping corner with its electrified air in their pursuit  -  but if only they could be captured more often than not.... 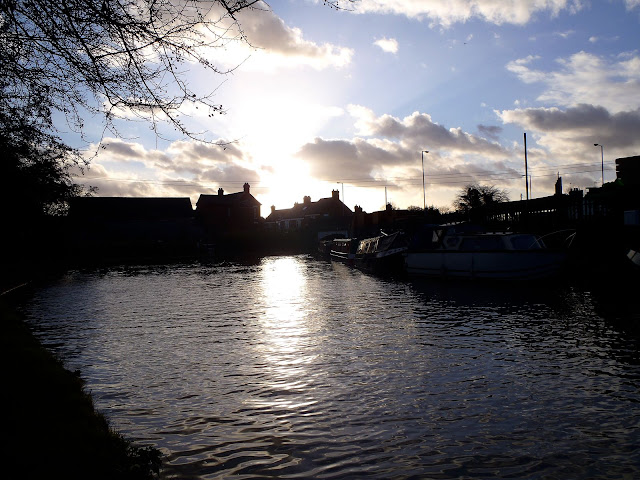 Longford is a better option for higher catch rates. The area throws up far more fish than Grassy Bend and the average there is 14oz, which isn't at all bad when you consider that lots of maggot caught tiddlers are bringing the figure down - take them out of the equation and the average would be about a pound and two ounces, which is very good indeed. Excellent in fact.

The worst equation of all is long hours spent wading through perch whilst float fishing maggots in Longford. Miserable. Don't bother...

The best equation of all is even longer hours spent patiently quiver-tipping lobworms at Grassy Bend. Miserable. Don't bother...!

The nicest equation of all is float fished bread at Longford, with an average fish of exactly a pound so far and promise for the future. Lots of bites this way with the majority infuriatingly, but interestingly, missed, though that can be perfected away, I'm sure, and it also throws up plenty of technical things to occupy the mind, unlike ledgering which can be the dullest form of fishing when bites are hard to find. No blasted perch too, and with the added bonus of the occasional tench and silver bream in the offing, it has to be the way forward.

And what could be nicer than a pristine fat roach caught on the float, eh?

Float fishing bread at Grassy Bend would have been the very best equation of all: I should have tried it earlier, but now Ronny and Reggy have turned up there, bread groundbait is going to pull them in to the detriment of the fishing. Then again, two cray bites in the ten hours I have put in recently isn't suggesting a plague of them just yet, so I might just give it a whirl when the high winds die back after hopefully blowing the oil slick up Rugby way.

I might even put out a trap and eat the oncoming hordes in their spidery tracks...