Angling News Week Launched - Read All About It!

Just a couple of weeks ago a new angling newspaper was launched. Angling News Week is on the shelves now, well the virtual shelves that is, because ANW is the first angling news publication purpose designed for mobile app-based consumption, which means you can subscribe, download the current issue, and read it at your leisure on your mobile device, be it smartphone, iPad, or indeed, any other computer-based, Internet-connected system, including your home PC. 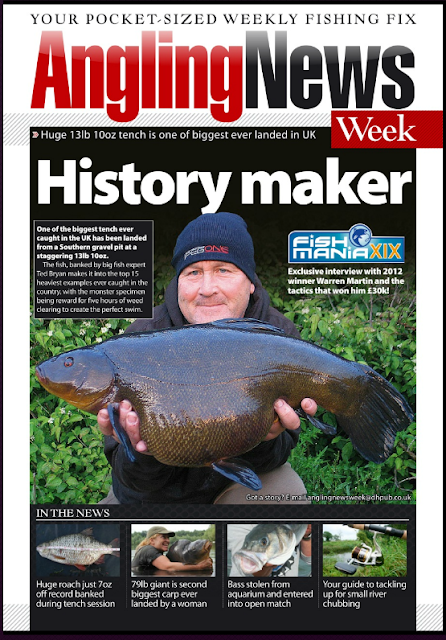 Of course, ANW is primarily news based as you would expect, so the first 12 pages or so are full of what's going on in the world of angling. And the news is as current as it gets, because the man heading up ANW is ex News Editor of Angling Times and now digital publishing maestro, Steve Phillips. It also contains catch reports, tackle reviews, and everything else we expect, but, it also contains an innovation that I think angling publications have missed out on for years, because fellow blogger and cartoonist, Brian Roberts, has a strip of his excellent 'Jack's Pike' appearing in every issue.

Hoorah, in print at last!


My part to play in its future success is in writing pieces for one of the single page blog sections that spice up the newspaper between the more formal and technical multi-page spreads that we're all accustomed to reading in the middle of our weekly newspapers and monthly magazines.

Appearing in ANW as a supporting act to such luminaries as Darren Cox, Duncan Charman, and Martin Bowler, is something of a shock to the system, but writing a blog section that must compare to others written by such all time greats such as Dave Harrell, a man who is recognised as one of the finest and most successful match anglers this country has ever produced, is both a tremendous privilege, and a huge challenge.

It'll be a challenge I'll relish and try my very best to live up to, though. You tell me if I don't!

You can download the first free issue as a taster, and subscribe to the following subscription issues, here ~

Only £1.49 per issue, and read it in the comfort of your bivvy too! Now, what could be better than that?