A Quest for Canal Carp — In the Light of the Truth

Quite liking the canal night sessions now that I've done a few. You don't see anybody at all. No one is around after dark in stark contrast to daylight hours, when it's a busy thoroughfare populated by all kinds busy going nowhere important, just feeding the ducks, jogging, cycling, walking the dog, or coming home from Tescos. I have it all to myself by 11pm, and all night long if I want to stay on.

That's good. I thought I might get stuck with some prattling drunk all night, or have to deal with lonely insomniacs, and to tell you the truth, I fear that almost as much as getting stuck with a nutter who I can just push in the cut if he gets too lairy
. That's the main problem with fishing public places after dark. You just can't stop people doing whatever they like with you. Thankfully, so far, it hasn't happened. 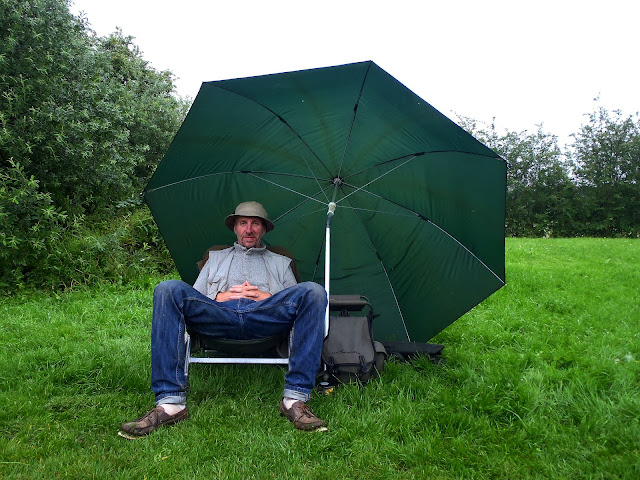 Last night's weather was drizzling and damp. It was one of those nights when shelter only helps in the short term unless its completely enclosed with a zipper door. Last night the moist air seeped in, wicked up, and it was almost impossible to get my hands dry, because everything I could dry them on, was damp by dusk.

Catching lots of fish didn't help, especially when the majority were bream. However, the first fish of the night seemed as if it was going to be something really special. It wasn't a large or very strong fish, but gave a good account of itself against what I'm using, which is barbel fishing gear, with ten-pound hooklinks, twelve-pound mainline, 2oz open feeders, helicopter rigs, and size 8 hooks. This is because of the carp that I'm supposed to be after, but have seen little of, as yet. The small fish don't stand much of a chance against it to be fair, unless the hook pulls.

I thought this fish was a really big roach when I saw it approaching me with its silvery flank and orange fins illuminated in the milky beam of the headlamp. It would go over two pounds, I thought, and so I was delicate with it, netting it very carefully indeed.

Only laid upon the bank did it reveal its true identity. I tried reasoning with it, asking it to change its nature to suit my desire, but it couldn't be bargained with and steadfastly refused to be a roach, regardless if I might wish it one, or not.

Things are what they are, are they not? And won't be what they ain't, no matter how much we might kid ourselves. 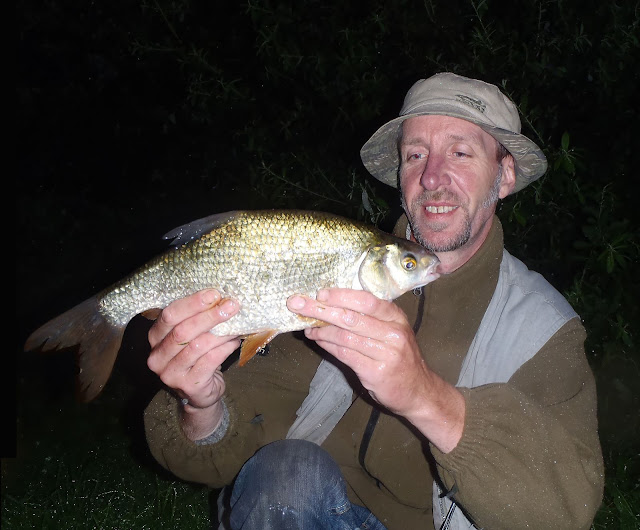 I took its picture after weighing, just to get a little practice in with self-takes, so that when that real two-pounder comes my way, I'll be ready for it. Because it was two-pounds, one-ounce. They came out quite well, but for insurance, I rested the fish in the capacious barbel net I'd hoped to get a carp into, and then set up another shot right at the water's edge, but the fish clearly had different ideas about that, having had quite enough of me and my unreasonable requests, thanks very much...

And flipped neatly back into the water, head first, showering me in spray and slime! 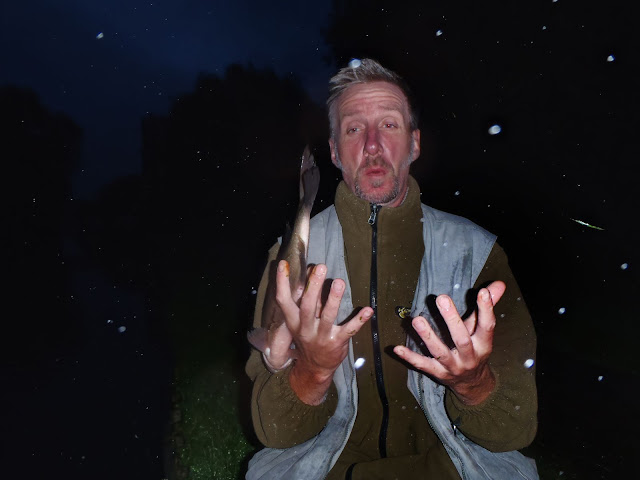 Runs were regular from then on, but were mostly from bream of a size that interests no one. I had been thinking it remarkable that so many tench had come along on these sessions, but very few bream, when it should be the other way around. Now I was getting it the other way around all right, and had almost given up hope of catching anything better than one-pound skimmers, when a tench was on, at last. 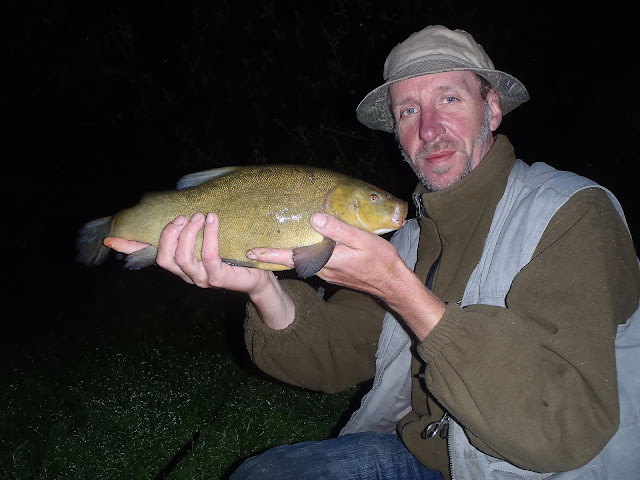 Another three-pounder. I thought I recognised this fish from some time back when I'd caught it at just over two-pounds and half a mile away, because it had a distinctive notch in its back near the caudal fin, but it wasn't the one.

The one thing about night-time fishing that I don't like, is the lack of photo opportunities. I mean what do you take pictures of when the camera can't cope with lack of light? Yourself with a fish is about all you can. Or yourself in situ, which is good for one shot in a blog post, but never two. Buzzers with their LED's glowing? Yawn, done it to death...

The water was interesting. Fish where swirling everywhere, but you cant take pictures of that at even the best of times. I thought many of these swirls might be from some very big roach, because a few were tench and some bream, but some were most evocative of roach. Don't ask me why, there was just something very roachy about them. 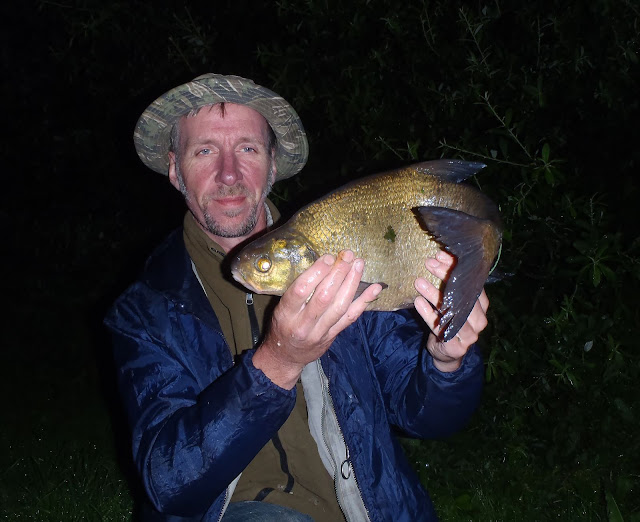 However, I didn't catch any, and finished the night with yet another bream, but at least this one was large enough at four pounds, and pretty enough in its unblemished golden scales, to have a picture of. Not that any pictures of it went well, bream being one of those fish that always seem to come out badly for me, for one reason or another...

But I'll be back tonight for more, because I'm really enjoying it, and that's what really matters. You never know, that almost unthinkable six-pound canal tench I'm predicting, or that big carp that I'm hoping for, might just come along.

Or even an unequivocal two-pound roach....