Some time last week, perhaps Tuesday evening down the cut fishing with Norman, I became aware of a twinge in my leg. A kind of sharp ache in the joint between femur and pelvis. When I sat on my seat and then stood up, it would hurt a little, so I spent most of that canal session sitting on the grass. At home that night, it got a little worse and caused a restless night. By morning, My leg had seized tight and had to be manipulated out of bed, but I thought little of it. I'd overdone the exertions of trotting in a standing position off a rickety, half-submerged pallet on Sunday, and was paying now with a little muscle pain.


So what? It was just a little 'sports injury.'

By Thursday evening the pain was getting far worse, and that night In bed I simply couldn't sleep well because the sharp twinges from my hip joint wouldn't allow any movement that wouldn't also cause a reaction and a bolt of pain to shoot through me. By morning I was hampered by it, had to drag the leg manually across the bed and my first incautious step of the day, saw me almost collapsing on the floor in agony. I went out to fish the Avon Friday evening, with Martin. My evening passed by fish-less, but I didn't care. I just wanted to get home, and take drugs.

Since then I have been drugged to the eyeballs with the strongest painkillers available off-prescription. If you had suggested lopping off the useless limb at the hip, at the worst of times I might well have supplied you the saw to do it with, because the pain of that operation, could not have been any worse and besides, the leg wasn't my leg anymore, it was a side of dead meat sewn to my pelvis, without any life of its own apart from its ability to cause the most excruciating pain.

Judy though, has been my ever-patient nurse. She gives me short shrift with a flu attack, but this was a serious enough complaint, what with my constant shreiking and yelping all hours of the day and night,  to bring out the Florence Nightingale in her. Coping alone, I'd have overdosed on those pills, and been glad of a quick and painless death.

Even now, nearly a week on, it is awful, though getting better. I'm sleeping with my leg propped up at forty-five degrees to the vertical, because it's the only way, drugs or not, to get any. And two hours at a stretch is still all I ever get before the pain returns and wakes me. I have to crawl up the stairs on all fours, and come down them on the one good leg by hopping, but with every jolt of landing, a certain jolt of pain.

But yesterday, I went fishing again. Judy took me out to Stratford-upon-Avon and Lucys Mill, where I thought I might just manage to hobble the few hundred yards to the weirs given a fresh dose of drugs, sit on a flat concrete bank once there, and not have to negotiate rutted tracks, slippery uneven banks and all those other impediments to progress that cause the able-bodied no trouble at all, but the disabled amongst us, the most.

It took me the best part of 20 minutes to do it, and 10 of them in negotiating the footbridge with its steep  and punishing stairs at either end. But I did it, and settled down by the top weir for a spot of roaching in the hot sun. I sat on my folding rucksack/stool and didn't get off it for the first three hours. I had everything tidily arranged, and to hand. I wouldn't have to move, but God forbid I should hook a barbel! 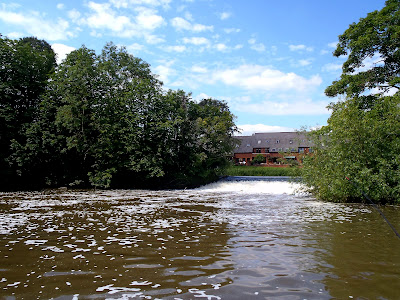 I used one of the rods that Andy Lewis had gifted me with the Tuesday past. A 10ft John Wilson quiver rod with a pair of progressive action glass tips that I thought would be an ideal roach rod for ledgered bread, and it proved itself exactly that, because in the first two hours, even with my drug addled brain, I'd a very tidy bag of almost ten pounds of redfins. The tip I used, the lightest, seemed quite heavy compared to those I'm used to, but it proved itself excellent at magnifying roach bites, with the whole tip moving smoothly, not just the very tip of the tip moving quickly.

The water was well-coloured, but fishing without any ground-bait in the feeder, a technique I have practiced the past few years, proved its worth once again, the bites being far easier to connect with than they ever are with ground bait causing competitive behaviour amongst the shoal members, and consequently difficult bites. These bites were clear, with a roach once it had located the bread, wanting it whole. 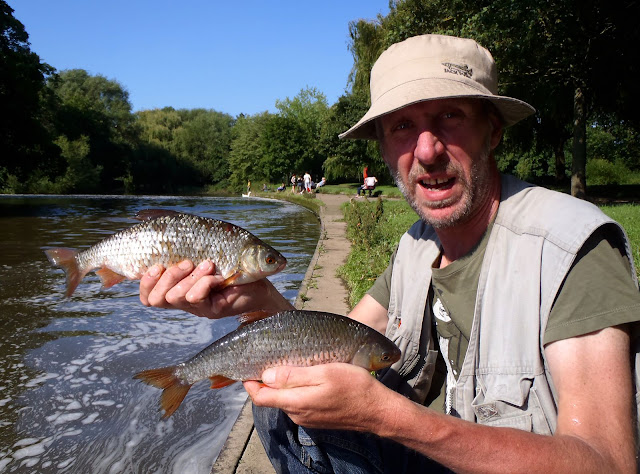 A few nice fish were amongst them, and with a brace about the pound mark, but then bites slowed down and eventually stopped altogether. So, it was time for a move down to the main weir, but it took me the best part of half an hour to manage it!

Very slowly and very carefully, I dragged the net the fifty yards along the concrete bank to the new swim, and I know that's bad practice, and ordinarily a change of swim means an emptying of the net, but the sheer work involved in processing the fish seemed too much hassle in my condition and without the assistance of Judy, who'd be back with me by the hour.

Here things progressed pretty much as they had at the top weir, Nice easy bites, and a succession of roach with another couple of pounders amongst them. Then, the bites changed. No longer from roach, but from another species, the tip banging over too forcefully to be redfins, but were not quite the twangs of chub. I wondered for 20 minutes what they could be before finally connecting with one. I'd given Judy, who'd returned by then, the camera, and she caught the entire sequence, from cast to bent rod. 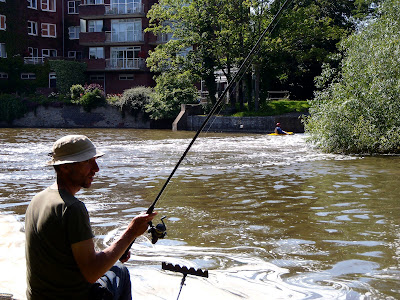 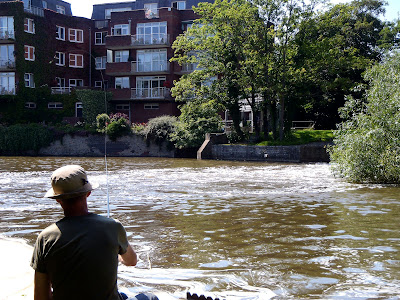 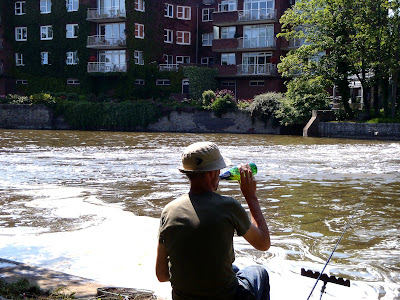 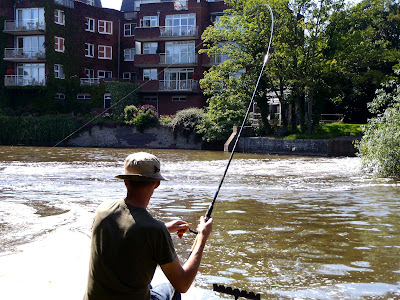 It was a very good fish and I was on tenterhooks, even though the fight was a little too slow, thinking it might just be a roach not having seen anything else but roach the whole afternoon. I carefully pulled the fish to the bank, through the accumulated scum in the margins, and only as it slipped over the rim did I finally see a silvery flank. It would have been a big 'two' if it had been roach, but it wasn't that, only a hybrid. 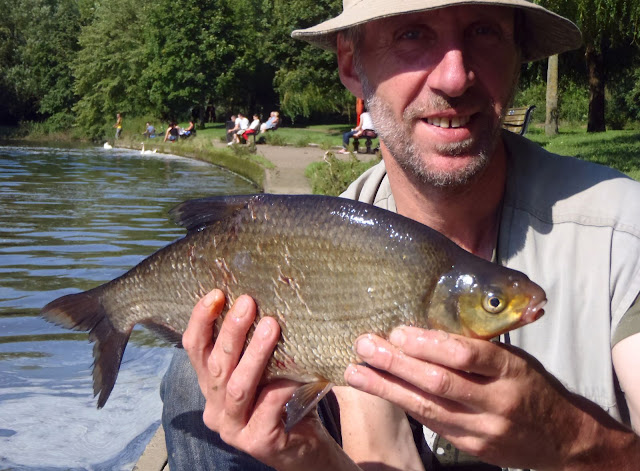 It looked an odd fish though. Clearly half a bream but hybridised with what? Its large eye in a small head was that of a silver bream...

Next cast I hooked another odd fish, one that seemed on first sight to be a proper silver bream but was somehow wrong. The big eye, the correct scintillating silver scales, but with just a bit of slime about it, and too many of something. Then the very next cast produced an unequivocal silver, the real deal this, and the first I'd ever caught from this part of the river.

That the next cast proved to be another true silver of just a few ounces, proved my instinct about the bites correct, for the roach had vanished to be replaced by a mottley crew of silver bream and their half blood relatives. 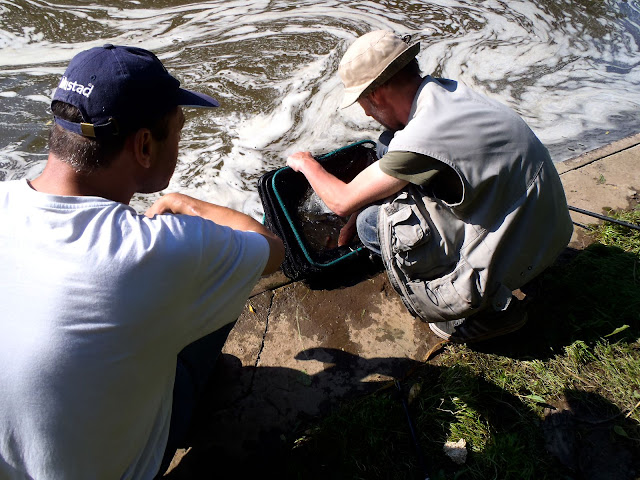 At four thirty, after a five hour match against the mill and its fish, I blew the whistle and pulled the net, but very carefully indeed. Judy was on camera duty, because I was incapable of moving about. And a another guy who'd stayed around and talked half the afternoon, lent a hand with the processing of the net. It weighed just over 15 pounds, with 12 or so of roach, and the rest the late arriving silvers and their looky likeys.

I thought it good bag for the raddled raspberry I'd been all afternoon. 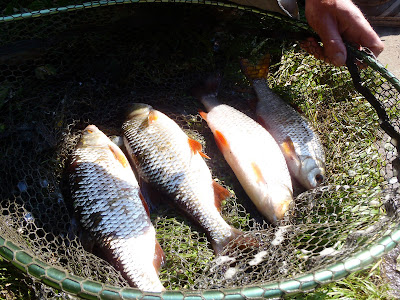 Examining the evidence from the pictures, I have to say that the big hybrid seems far more bronze in tone than it actually was on the bank, where I'd been struck by the silver content in its scales. The bream from Lucy's Mill are all a dark yellow bronze at this size, but this one wasn't like them. And the eye is just too large in the head for a true bream, fitting in just four and a quarter times from snout to tip of gill plate, which is correct for a silver bream. I wonder if it's a large silver bream x bronze bream hybrid turning more and more bream like as it grows? It's more likely to be a roach x bream though, and despite the large eye, because the aforementioned Silver bream x Bronze bream is among the rarest of fish swimming.

However, the second picture of the true silver bream and the slightly odd one that looked as if it might be too, turned out to be very interesting indeed. 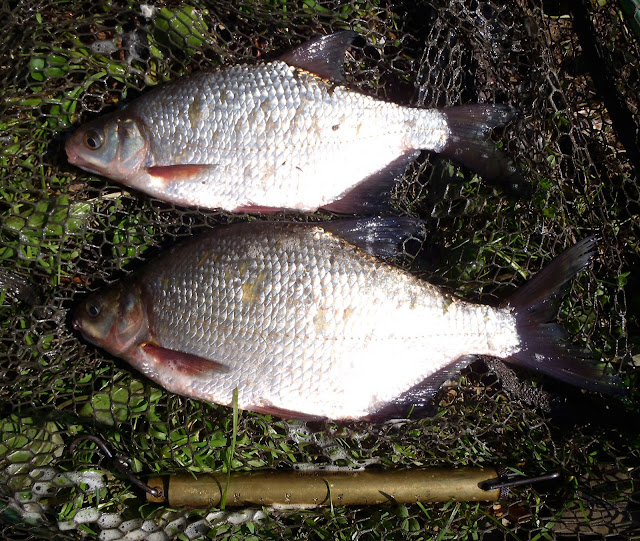 If you had sent me this same picture by mail for ID, my first reaction would have been that its a picture of a brace of true silver bream. They are both correct in every aspect of general appearance, and neither displays anything that muddies the waters on first glance, however, closer analysis turns up some interesting facts.

Firstly, the true silver bream (the smaller one) has different scale counts along the lateral line on both flanks, displaying 49 on one, and 46 on the other. (I take pics both sides nowadays) Now, that might seem remarkable, but different counts both sides are quite normal, but rarely by a difference of three. And anyhow, my counts might not be so accurate what with half scales at both ends to contend with and synthetic opiates still circulating through my eyeballs. However, the count from dorsal fin to lateral line is 9, and that's correct. The eye is correct too, and so are the scale and fin colours. The fish is a true silver bream, odd sides not withstanding.

The larger fish though, well it might well appear to be a silver bream, but it's not quite that, The scale counts are 51/52 lateral line, and 11 dorsal to lateral line, and that's just too many in both cases for a true silver, so it is a hybrid. It's certainly no skimmer bream though. Everything about this fish screams 'silver bream' except for the scale counts. I'm pretty certain that there's a firm case that this fish might well be that rare fish, the silver bream x bronze bream hybrid. Rare, because silver bream are quite scarce themselves, and half-breeds with them, accordingly far, far rarer.

It was a good day out though. Painless, in a painful way. And I'm glad to say in signing off, that I'm feeling a whole lot better for it. Like an old lady on a Zimmer frame, I still have to cross roads at a right angle to the kerb, and the leg remains something of a foreigner to my body, but it's growing back nicely...

And it only hurts now, when I look back over the last week, and laugh out loud.