The second proper session of my winter campaign for a 2lb canal roach did not go at all well. To be honest. I'm sure something or other was worth going for, but I'm struggling to remember what exactly it was that was noteworthy about it...

I have to jot down my thoughts, though. Idler's Quest might be a vehicle of questionable roadworthiness to many but it's also a personal run-about of inestimable value to myself. It is the journal of my days. And if I don't make the effort then I just know that years hence I'll go looking for the account that contains the details of that crucial little thing that I've suddenly realised was the important one. And it won't exist...

And besides that, the act of writing often forces the issue hoiking what seemed an innocuous and inconsequential happening at the time out of obscure memory and projecting it into sharp focus. Let's see. The two pairs of ravens whose winter lodgings are the looming pylons were very active. A pair of jays have also decided that the far bank hawthorns are a good place to hang about. The dogs walkers were up and about early and some before first light. No cyclists went past but a group of hikers did.

Err, the first boat went past about an hour after starting; the second half an hour later...

Oh! A low plane out of Birmingham International flying off to a far distant continent passed overhead. 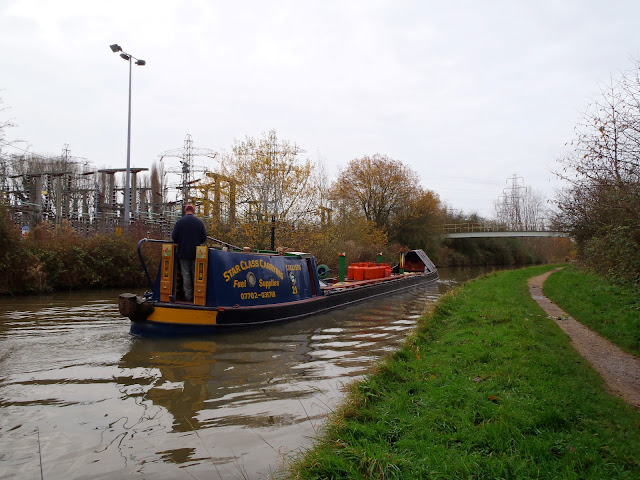 Hmm. Weather was bright and clear with a sharp cold breeze blowing from behind. The water was towing a little but not forcefully. And it was fairly clear at dawn before boats came through and thereafter was lightly coloured.

I changed swim three times over. Each choice was made based on where I'd caught roach before. Each change was forced by passing boats because they wreck bread swims.

But perhaps they don't...

Who says they do?

Because somehow I've come to believe that it is fact. Nothing whatsoever occurred in either swim, so what would it have mattered if I'd stayed put in the first and just fished on? I might have learned something that couldn't be learned by hopping around hoping to land on a shoal of fish and extracting one or two. What if I'd stayed and patiently built the first swim over the four hours I spent at the venue? Would a shoal have come along later?

Perhaps the crucial thing might have been my own impatience. An adherence to self-imposed 'golden rules' that might just be crusty old habits.

The utter lack of bites made it feel as if I'd cast into waters that contained no fish whatsoever. That's not true of course. I know it contains very large roach if little besides. Or does it? Maybe it once did and now does not. Maybe it still does and the reason it does is because there are so few others competing for food. Let's face it, true big fish waters rarely hold vast stocks, do they? Some gravel pits hold just a handful of very large bream, for instance. And those souls who fish for them expect to sit it out for weeks for the chance of just one bite.

But this is a bloody canal! I don't know how to sit it out here...

As I'd sat tapping my itchy feet on the bank in time with Estelles' 'American Boy' rotating round and round and round in my head, I'd remembered what had happened on the first session when sitting in precisely the same spot doing exactly the same thing to the very same tune...

A big red juicy lobworm had left its burrow and passed through the lush grass between.

I'd let it go about its business...