I don't usually endure atrocious weather if I can avoid it. However, yesterday morning we had a perching trip planned during what was forecast as a period of heavy rain and high wind. I remembered that I had a brand new fishing shelter that I'd never used stashed somewhere in the house so I thought it the perfect opportunity to test its mettle. 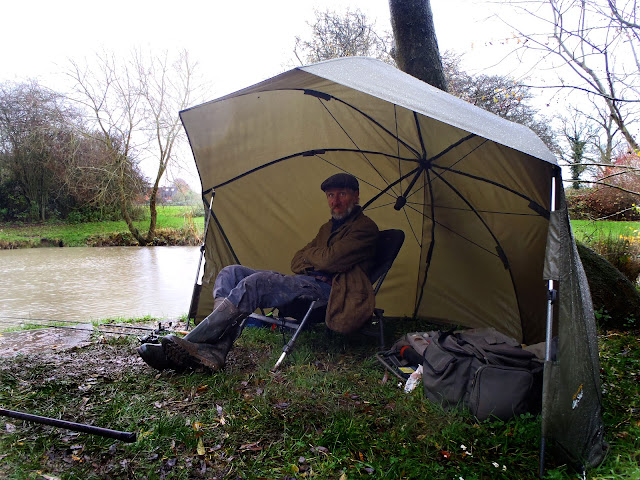 It was simple to set up. Well, as easy as it could be given the wind trying its best to wrest it from my grip, but once pegged down it provided perfect protection against the elements. I'm usually quite neat and tidy having done so much canal fishing in the past where tackle must be laid out in military order so that things don't get broken by passing bikers hurtling down the towpath hell bent on beating some personal time trial. However, within the hour the interior was strewn with jumbled gear and soon assumed all the appearance of a 1980's Stonehenge free festival tarp bender on an acid trip comedown.

The fishing was pretty dire. I didn't get my first bite till the 2 hour mark and then all I caught were bream, hybrids and the very occasional roach from that point. At least I upped my hybrid score on the challenge board by 7 points...

I've never thought heavy rain a good thing where perch are concerned. Or roach come to that. And I'd caught neither by noon. Actually, the only kind of fishing that really works in heavy weather is long stay carping and the like. Then getting a bite during the worst of it is not a hardship. But when float fishing it is a busy style that demands a high work rate, so everything gets wet and muddy and there's no way to stop the gradual accumulations of these minor discomforts, Before long it's a mire and the only way to avoid it getting worse is to stop fishing till it ceases. 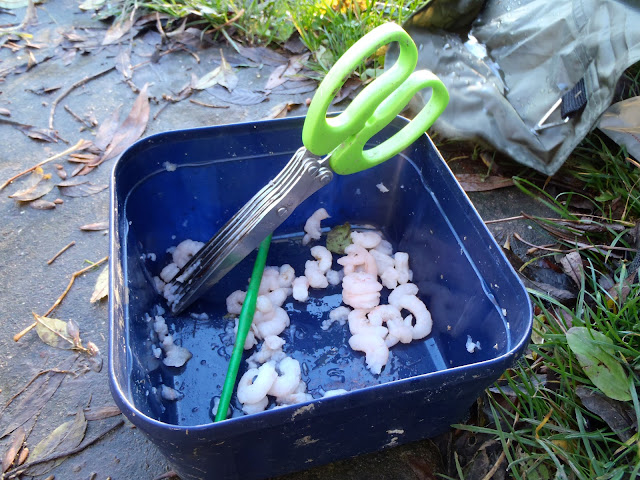 My swim became alive with fish by degree attracted by a constant drip of chopped prawn. Perch may love them. But so does every other fish and I was stuck with them and them only. Normally I have an answer to that problem but moving to somewhere more productive of perch was not on the agenda today. I had a shelter set up!


The weather broke early afternoon and the rain ceased. I continued catching bits and pieces the rest of the session but Martin finally broke through with a big perch. It would be the only one caught all day long between four anglers around the pond sitting it out for them.

For some reason my camera made a complete hash of the trophy shot. All three takes were completely out of focus and somewhat overexposed though pictures taken before and after were perfectly sharp and well exposed. Quite why automatic cameras freak out on occasion I have no idea. Luckily Photoshop can rescue almost anything except a whiteout. Good job this was not his personal best perch, though!


My only spell of excitement was evening time and finally hooking what I truly believed had to be a big perch. It was hard fighting, kept its head down, and felt quite weighty. There's no other fish in the lake that it could possibly have been except a good crucian. Imagine my face when some kind of washed out gnarly old brown goldfish with a nick out its back hit the net.

City are at home and the crowd turning out in ten minutes time and we have to avoid the traffic. 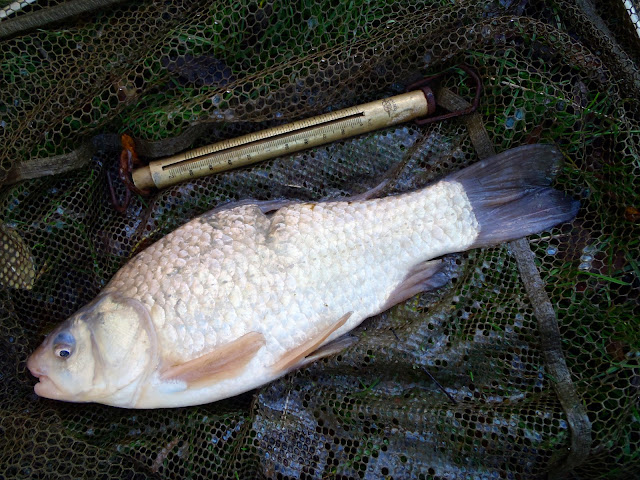