The roach campaign on the Oxford Canal is now well underway. Well, underwhelming is probably the correct word for it, because on Friday I uncovered a few home truths about my first port of call that I hadn't reckoned with. I got to fish bread at Grassy Bend without a boat passing by for an incredible four long hours. I packed up and went home frozen stiff by an increasing chill wind when the fourth hour had passed by so who knows? There may not have been another boat pass through the rest of the afternoon... 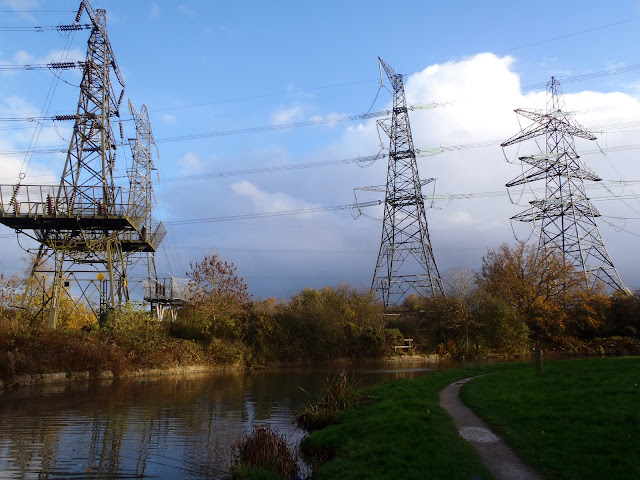 However, what that period of uninterrupted peace framed was a distinct lack of fish. In four hours work there should have been at least six or seven bites. That's what the Coventry Canal would not fail to give in such a time frame at just about any location I know of even during the toughest of times. But I had just one.

It arrived just as it should at around the three-quarter hour mark. That's typical when fishing bread over mashed bread in wintertime. Almost a rule. It was also a typical roach bite. The float shot up in the air without prior warning and a good fish was hooked. And it really could have been that 2lb roach I set out for the way it fought.

When I saw the flash of a broad silver flank deep down in the murky water I went all jelly legged and giggly headed thinking I'd cracked the barrier first try because the fish was clearly a good two-pounder.  But then it came up in the water and rolled over when I saw a white underbelly with two pairs of pink fins.

All ideas of roach went out the window. With the Grace of God this must surely be a simply monstrous silver bream heading for three pounds... 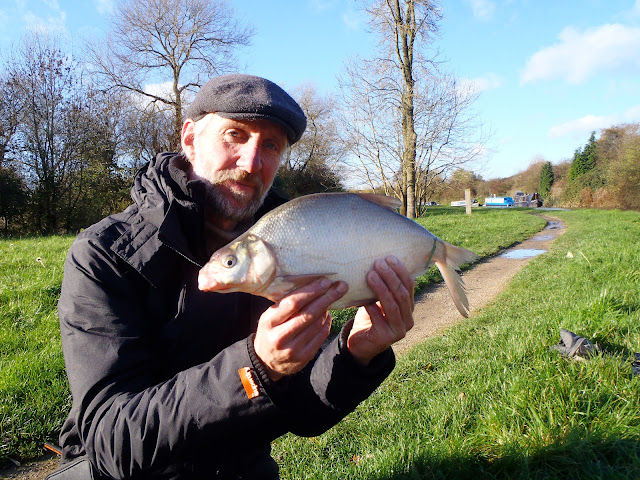 Only in the net did I realise that this fish was something of a disappointing freak. It looked all the world like it had to be some form of hybrid because surely it could not be a true bream. Not a hint of yellow-bronze anywhere, just a plain silvery white from tail to snout. Except for the pairs of pink ones the other fins, that should be a mid-dark grey in normal bream, were colourless and transparent. I had to turn my back to the sun to get a picture of it in the shade of my body otherwise the camera couldn't cope with the blinding reflection.

But checking the oddly wonky lateral line, the scale count was way over fifty and absolutely conclusive. Nothing more than a common or garden bronze bream, I'm afraid.  It was one of those strange 'ghost' bream I'd seen years ago swimming beneath the ice a mile up the road.


The shoal I saw was about forty strong spread over a large area in small groups of two to five large fish. All were the normal colour except for a couple that were pallid white. These were spotted in a group of five and I wanted to catch one from that day on just to examine them closely to see if they were indeed very large silver bream that I fancied were living amongst these ordinary bronze bream.

Shame that they weren't quite what I'd imagined they might be. At two-pounds eleven-ounces this fish would have been 83% of the current British record and a new British canal record too if they had been!

I have to say that I always suspected that this area where I have always struggled to get bites was actually something of a desert without much to commend it apart from the undeniable fact that fish when they are caught there do tend to be large roach. Now I was certain that my past ruminations were correct. It really is very sparsely populated indeed.

Which begs the question — should I return to tough it out there or should I explore alternative options elsewhere? It's the specimen hunter's eternal dilemma, isn't it? Do you fish where a proven track record has already been established or seek to confirm a new place with all the uncertainty that entails?

Thing is, for long sessions it does provide what few other places do. And that is, as the venue's name suggests, large spacious grassy verges. And they provide a great deal comfort. Also the ravens were back on the pylons. Two pairs now. And they are quite an entertainment chatting amongst themselves and soaring around while the hours pass by, one by one.

Another try or three, I think. Early mornings perhaps...