Originally a one-off 50th birthday bash never intended to be repeated, the Zedvember thingy has proven itself a useful social gathering for committed and casual canal 'predheads' alike falling as it does at the juncture between the very end dregs of the summer season past and the first fresh blasts of the winter to come. My birthday is no longer the point.

It was always an excuse anyhow!

Winding down in preparation for the tough but promising months ahead and winding each other up in the process is what it's about.

A high minded thing in principal.

But in practice it becomes simpler and simpler minded over the course of the six hours between noon when it begins... and pub time around six when it draws to a close over the course of a beer or three and shared bags of pork scratchings.

A motley gang of grubby weather beaten anglers descend on my patch of the Coventry Canal, where firstly they'll chew the fat in earnest pursuit of fresh gossip, news of half-baked baiting theory and radical but dubious rig experiments, discussions about untenable claims made about predatory fish signed off and published by the unscrupulous editors of our national rags, personal stories of fishing woes, and of very near successes, the pros and cons of crayfish infestations. And the like.

Boasting is not an issue...

That is never a good idea ahead of zander fishing!

Those who have done well through summer are slapped on the back...

And then things'll progress from best through worst when they'll turn the air blue with tales of outlandish medical horrors involving the injection of nasty chemicals into, and outsize implements thrust down the knob hole, badly timed bawdy jokes, smutty humour and what not in the way of descending quality and ascending hilarity of banter.

Between times they'll think about thrashing the water to foam in pursuit of zander.

But never actually get round to it... 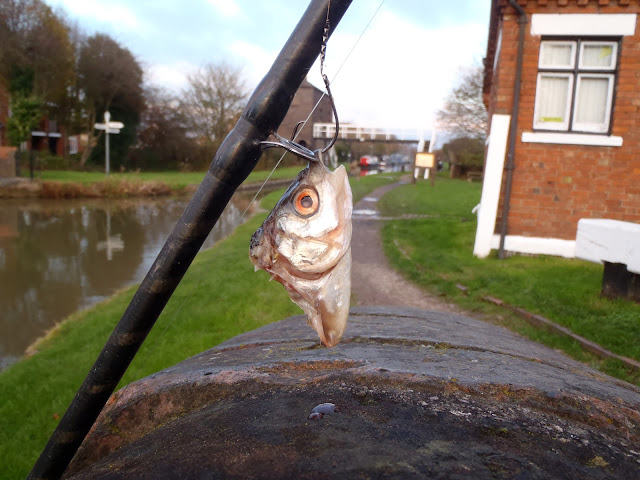 Well, that applies if you're local and have zeds at your disposal, 24/7.

Not if you make the long journey up from the South where zander are rare, tricky or unavailable at worst, available on a pricey day ticket at best, and are the primary thing should you travel to where they're both wild and abundant, and also free.

And that was never more apparent than it was this Sunday the 22nd November at the Mecca of the Schoolie Zed, Hawkesbury Junction.

Compared to 'The Smoke', all country North of Watford is clearly a big small place to a 'Southern Fairy' such as James and brother Richard, Brian Roberts, Russel Hilton and Ben Hennessy....


Good grief it was cold in the chill wind. And my early morning fears were well grounded because no one caught a thing for a very long time indeed. I worried that nothing would happen at all because it was rock hard.

This session was igneous!

Dan was my touchstone of hope.

Probably the most experienced canal zander angler in the country, he'd warned early that an hour before dusk was everyone's only chance.

And then best taken by way of a length of soft plastic...


Our 'Rubber Guru' was correct.

Right as the light began to fade, at last Russel had a zander on a small roach dead bait. And I believe it might have been his best ever? So he and Beth hadn't journeyed to this post industrial wilderness and endured the perishing cold and the tricky fishing for nought. 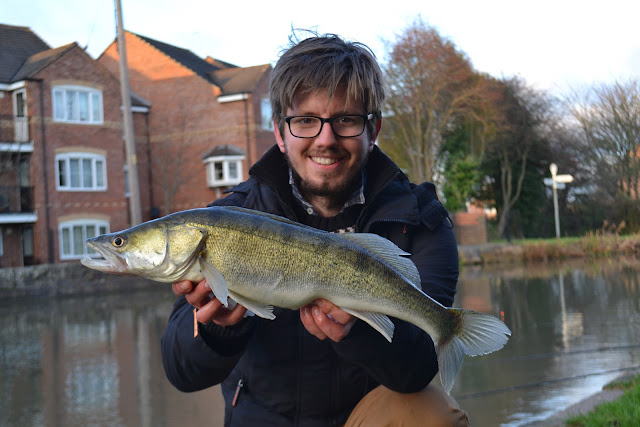 But would he retain 'best zed' and win the match outright with just an hour remaining?

There was all to play for if Danny was to be believed... 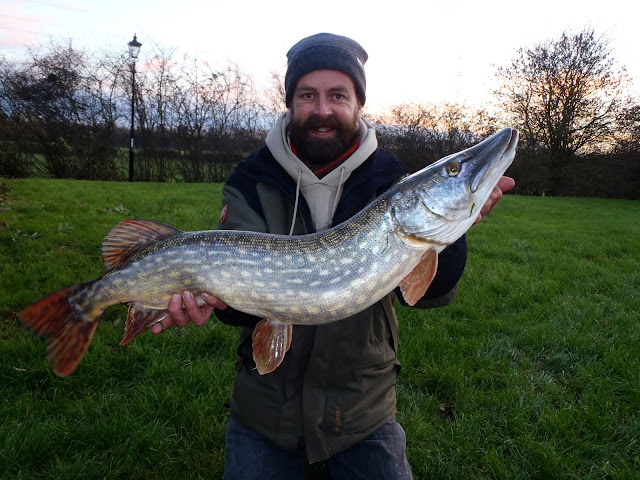 Brian then latched a pike to a shad and was in process of post-catch ritual just as I approached.  A great result and one that gives hope that the double-figure fish have returned after long absence from the local scene because it weighed ten-pounds on the nose. A great looking fish too!

Best pike was in the bag most likely (unless my crafty 'Lazy Rig' would do the business for me at the death...)

But would James break his canal zander duck?

It didn't look likely when so many experienced locals had failed to raise a sniff all day long.

Time was running down fast. But in stark contrast to the slacker Monkey contingent, each of whom have probably banked many times over what zander the industrious Fairy crew have combined, they were all hard at work flicking jigs, here, there and everywhere. While 'we' kicked back, and jawed.

In the last desperate moments of extra time...

Brian missed a savage take, but James knocked it past the keeper!


This was what I'd hoped for — the visiting team taking home their hard won gongs with James finally catching a zed from this canal after his previous abject failures.

It was just a little un'.  But Mr Jimmy Denison just didn't care a jot what size it was.

And why should he?

This was a personal victory! 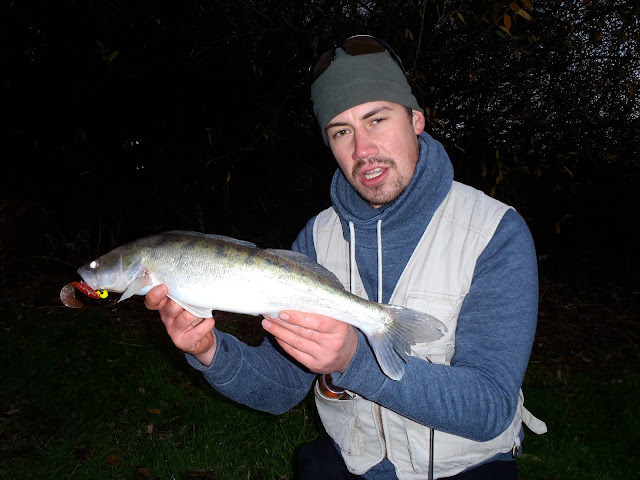 But that was that. The brief spell of activity was over in less than an hour and it was soon time to invade the pub, pull a few pints, and retire to our heated 'fishing' hut on the banks of the cold canal, where the social continued in noisy jollity till every last rod had retired home one by one.

Here, there, near and far.

Dragging my gear inside the pub and propping it near the bar's roaring fire,  Judy and I hung about for an hour or two, warmed ourselves with a few more pints, and then walked the inky black mile through the wooded cut to home.

My thanks to all who attended. It was not easy fishing. About as tough as it ever gets, I reckon.

But it was, as it always has been, and always will be with you lot about.

I really think you must have enjoyed yourselves just as much as I enjoyed your excellent company.

See you all again next Zedvember, I do hope!