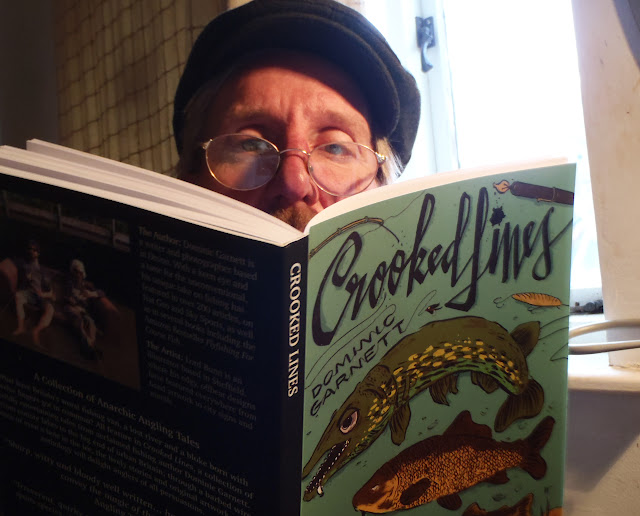 The second greatest danger posed to those writers published by mainstream houses is that they may begin to anticipate the editor's scissors and cut their cloth accordingly, losing all power over their own creative impulses in the process, and churn out ill-fitting commercial rags that bring in steady predictable revenue.

The first great danger is that they may choose to turn against all that, stick two fingers up at the established order and go their own way, losing all control over the commercial process, in the process, but labour with love tailoring fine things that may not find a rail in the shop to hang upon and deal with precarious remuneration...

It's a stitch up!

But it's Dominic Garnett's world...

Crooked Lines is self-published. That means that the author takes a great risk with his own cash paid up front in hope of future sales enough to cover the project overheads and then turn a profit from which wages are drawn. The great thing about self-publishing is that every penny of profit is the property of the author. He is not scraping a paltry 10% royalty on net price from a publisher but taking 100% of gross revenue. Therefore every book sold after break-even point is reached puts dinner on the table and gas in the tank. Should enough profit be made then there's surplus that can be ploughed back into the business of making the next book without drawing from personal money.

Of course there's HMRC to take care of should the year pass allowances...

But it's a great business model should all go according to plan.

Of course, self-publishing is tarred with the bog brush of the self-indulging amateur. Most self-published books are well meant, but are ill conceived and badly received because they lack the lustre of professionalism the publisher lends. They don't shine.

However, there's a very good reason why Crooked Lines had to be self-published. Because this is a book about rejected material important to the author that failed to make the arbitrary grade required by publishers then how else would it ever be published unless by this route?

A risky venture and a brave one that in principle could work out. But would it also do what a book must and prove itself not only worthy, but a damned good read...?

The cover artwork I thought wonderful and it came with a matching bookmark. Really outstanding.

But was this the polished skin of a ripe turd?

Well, no. That's not what stink it hid because the introduction was an invigorating blast of fresh air. Mr Garnett gets it all off his chest and does not pull his punches. Matt Hayes wades in at the foreword with a swipe across the complacent corporate mug he knows so very well. The tone is right and really sets the pace. I've taken the bait and I'm hooked. And then I begin dipping into chapters scanning a few paragraphs in advance of proper reading when I get the distinct impression, and quickly, that Dominic has found something very special indeed...

He's arguing with me and I don't agree with him. There's something that chimes over here but I'm knocked off my perch over there. I'm fighting against a crooked line. What's going on? An angling writer expressing an unexpurgated personal point of view?

Only Chris Yates is allowed that privilege. Surely?

I like this. I don't read books that aren't argumentative. Who cares what someone says when all they say  is what you want to hear? The stories are ripe with expletives. These aren't gratuitous, though. They're absolutely necessary and lend the immediacy that fishing prose forgot it could wield. None of that watery eyed, tweedy pin and cane prissiness here. This is dirt real!

There's a chapter that makes me yearn for the coast and the huge mullet of the Essex salt marsh. In Coventry they're four hours and a million miles distant but I vow one day that I will return to try again. There's crawling about in drains and ditches in Somerset with 'Norbert', bucket and bike style catch and release in Poland, char fishing by way of a drill in Norway, and the capture of a canal carp of middling proportion in fact, but of enormous proportion in the truer game of things. I've been there and done that and agree with the sentiment entirely...

But there's that 'Scales of Madness' chapter that I simply don't agree with.

The only way you are going to know if you'll agree with me, agree with him, or have your own entirely personal point of view on the matter — is buy this book.

Let me tell you, it will be a well spent tenner. And bought soon enough you'll put a well deserved bottle of admittedly cheap plonk on the author's Christmas dinner table, a gallon of petrol in his motor so he can drive out to some new fishing adventure, and just a little over in the way of ploughed back profit to cover the first words about the experience in volume two of Crooked Lines.