The silver bream has to be one of the most difficult to identify fish in British waters, not because there is any real possibility of any moderately experienced angler mistaking specimens for 'skimmers', one of the most commonly caught and easily ID'd of all British fish who are nothing more than juvenile bronze bream in their silvery immature plumage, but rather because of the confusion that arises when one is confronted with a water that contains both silver bream and roach x bream hybrids, who really can look confusingly similar.

Luckily, there are a number of subtle but telling differences that once seen for what they are, should clear up any further trouble. These identifying characteristics can be quantified quickly, doing away with all the laborious counting of scales along the entire lateral line (should be between 44-47) which is an awkward thing to attempt to do in the field, and easily appreciated while unhooking the fish. 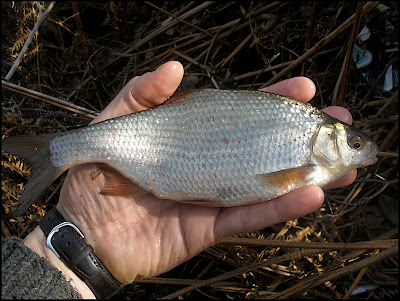 The eye is where you should look first if you think you might have stumbled across a valuable cache of 'silvers'...

The proportion of the width of the eye to the size of the head in silver bream is slightly more than a quarter of the entire length from tip of snout to tip of gill plate, and cannot ever be very much more or less, whereas the same relative proportions in a roach X bream hybrid's eye are about a fifth. Consequently the silver bream's eye looks very large in its relatively small head whereas the hybrid's eye, and indeed the hybrid's parent's eyes too, appear very much smaller, or more 'normally' proportioned, if you will ~ 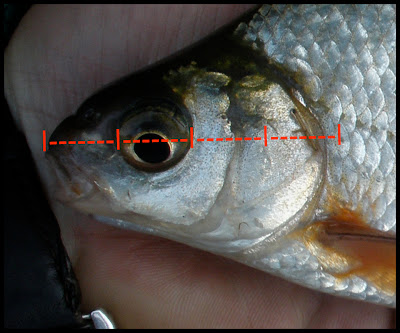 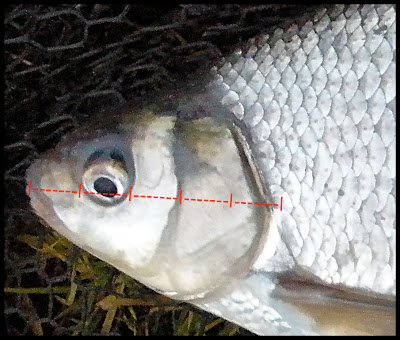 The upshot of this large eye of the silver bream even in grand old specimens over a pound in weight is that they have the appearance of being perpetual youngsters because of our natural tendency to anthropomorphise anything animal with large eyes into a human baby equivalent - they are dead cute, that's what I am saying...

In fact if you catch a silvery fish and your first thought is "ooh, that's really luvly" then investigate further!

The second giveaway is the 'wrist' between the root of the anal fin (with its 23 or so branched rays) and the caudal fin which will be shorter than it ever will be in a roach x bream hybrid because both of the hybrid's parents have scale counts exceeding that of the silver bream's meagre seven or eight along the lateral line between the aforementioned positions - the bronze bream with around 9-11 and the roach with around 13-14 and so, as a consequence, the hybrid of both can never have less than the minumum number for bronze bream or more than the maximum for roach. Any road up, it's always going to be more than it can ever be for a true silver bream. 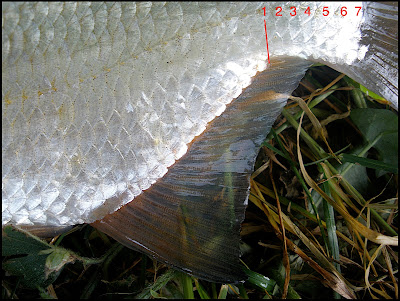 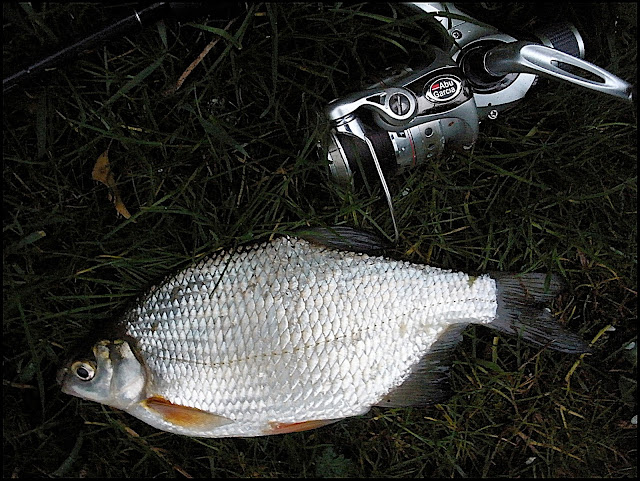