Monday morning saw Keith and I visit a hot new tip off in search of a monstrous great perch. Keith is seeking a four pounder now that he's had a few three pounders while for myself, still stuck in sub-two pound land despite having broken three pounds with that fluke capture of mine from Blenheim palace, just wanting to get a decent string of fish to back it up, if not beat it and put it to bed.


It was a commercial fishery, of course, and quite a young one at that with its typical complement of upstart alders and willows lining the banks not yet quite the size to create that overhanging bankside cover that big perch seem to love so. We fished for a couple of hours without any hope of a bite and without the build up to perch bites that seems so be the pattern on our favorite commercial perch venue, Weston Lawns, the place where we have both cut our teeth on the species.

I needed a hole free plastic bag in which to stow some borrowed red maggots for groundbait as they were the one bait I had not been able to secure at six in the morning for the eight O'clock pickup. I'd gotten my prawns from a near deserted Tesco megastore at opening time and then dug my lobworms by headlamp by 7:30 am from a productive spot down the Cov Canal where every spit of soil throws up one or two and enough for a session can be dug in twenty minutes.

The plastic bags were easy enough to procure from the fishery bins only they were all chock full of dumped bait left over from a Sunday match. One bin was full to the brim with perfectly good fresh bait. I settled on an empty sweetcorn tin for Keith's loaned maggots but took away with me a carrier bag full of groundbait laced with pellets, casters and corn to freeze at home and use on an upcoming gravel pit bream trip. Match anglers are clearly not affected by recession -- that bagful was at least a fivers worth of bait, and laced as it was with a pint of casters, perhaps more! If I had a bigger freezer I would have taken the entire binful home with me as it would have been groundbait enough for six or seven sessions. Absolute madness, but worth noting as a source of free bait -- just mark down where Sunday matches are being held, turn up after the weigh-in and plunder the bins. With bait at the price it is nowadays, who wouldn't be interested in that?

One bin had an entire tub of dendrobaena worms writhing around and trying to escape out the closed lid. Who would dump worms? Just keep them cool and well fed and they'll last a month or more, and with a match on next week why not take them home? Match anglers are crazy, evidently, so I scooped them all up for myself. Perhaps they believe all they are told in the rags about absolute freshness being crucial to success, which is absolute piffle in my experience -- fish are like dogs, they'll eat anything remotely edible in the absence of anything better...

I have a dog, and in descending order of merit, it goes a little something like this ~

A dog, given a selection of all the above, will pick its way along the entire order from prime beef downwards and still eat the goose shit as pudding -- I very much doubt if fish are any different and if anything, rather less picky being rather less intelligent than dogs.

We still didn't catch a thing though, so after a couple of hours, and having paid up the ticket price, we moved over to a second lake on the complex where we fared just as badly, before deciding to up sticks and go over to Weston Lawns by midday for some guaranteed sport. 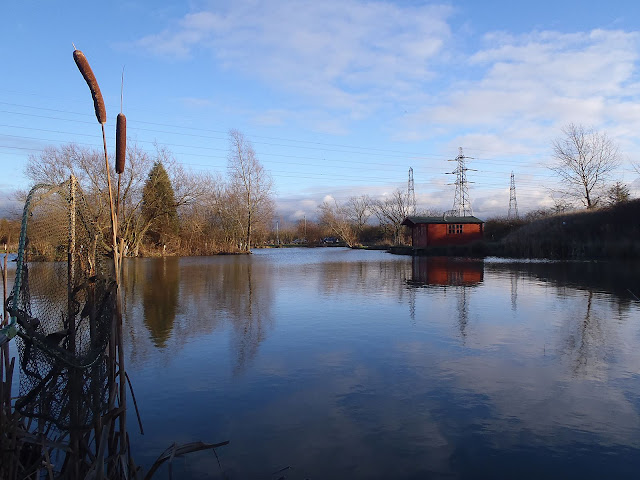 I have grown to love The Lawns in all its idiosyncratic madnesses and come to expect a visit from at least one of its seemingly endless complement of half-feral animals on any given trip. This time the place was all but deserted with only one other angler fishing our pond and no members of the menagerie in sight. We picked an experimental place to fish, side by side, a place where neither of us had ever fished before being loath to fish anywhere else but the couple of banker swims we'd located by trial and error over the many previous sessions.

As I mentioned before, there's a procession of preliminaries that seem to accompany the capture of sizable perch at this venue. The swim is baited with red maggots that draw in the roach, rudd and small perch, you start catching these fish who all will take worms, and to a lesser extent, prawns. Then the big perch are drawn to the underwater commotion produced by the small fish grubbing about and after an hour or so, a perch over a pound is caught followed hopefully, by a bigger specimen still. You cast all around the baited area in search for the perch as some days they come almost under the bank in two feet of water and other days from four or five feet of water yards off the bank. Open water seems devoid of them. 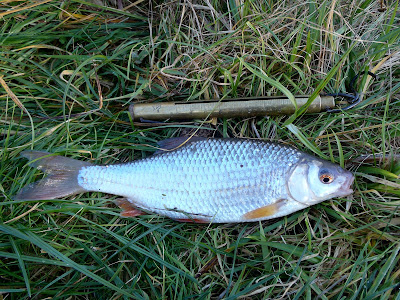 This afternoon my swim progressed slowly but surely all the way through the preliminaries with a surprise roach of eleven ounces among a string of smaller specimens to elevate things (my largest from this venue) till at last a perch of a pound and a quarter came along. It was caught in three feet of water a rod length out. Keith's swim right next door, in stark contrast, never did produce a single bite from any species -- which goes to show how peggy this commercial perch fishing malarky really is. 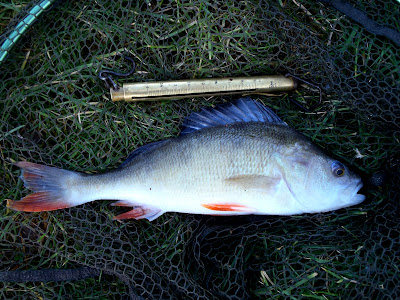 With just an hour of light left we both decided to move swims and fish our favourites, Keith electing to fish the peg where he'd lost a knee trembler at the net the previous day and I taking the other, which is still my firm favourite despite the fact that Keith's swim choice does seem to produce bigger fish on the whole. Here things progressed rapidly through the preliminaries with bites coming regularly and then a feline menagerie member, one new to me (where do they all come from?) appeared and began to pinch prawns.

He was a big tomcat and an old tomcat too, creeping around on aching joints, peering through his rheumy eyes. I hooked a small perch who came flapping to hand, the old tom suddenly gained a spurt of spunk, leapt a yard in the air, expertly snatched the perch square in its jaws, mortally wounding it and making off sharpish with his prize, the rod top twanging away merrily and me chasing up the path behind. Now I've caught a bat and a crafty rat, but never have I caught an old tomcat...

Luckily for me, I can tell you this from one experience, cats don't turn the bait like a pike and then swallow it whole, but seek a safe place where the prize can't escape where they'll eat at their leisure. Thank heaven it wasn't the albino great dane that often roams these banks, as he would have crunched it and swallowed in one, no doubt, fresh perch being second-class food and well above goose shit in a dog's ranking! I finally stopped the cat some way along the bank and unhooked the quivering perch still tight in its jaws, at which point he dropped it, pawed it, sniffed it, and then promptly left it for dead. I knocked it on the head and put it safely away for zander bait.

After this he watched out for every new capture but I kept them high and safely out of cat shot. They won't go away, cats. Do they have nothing better to do than snaffle prawns or grab and kill anything that moves, just for the fun of it? Then a net-worthy fish was on, a perch of a pound and a half, who the tomcat took a great interest in but was loathe to approach too closely -- evidently he'd met his match in this spiky creature, who out of her element, just black-eyed him blindly.

The Lawn's decidedly odd swim illuminations turned on as light failed and the end of day was nigh, but not before another menagerie member turned up, a sturgeon of two pounds and a half who plugged about for a bit and came to net. A personal best fish! Not much of a personal best, them growing to phenomenal size elsewhere, and sixty pounds at another fishery not so far away, but one nevertheless.

The lawns is purported to contain catfish, though I've never seen one. My apologies to any 'big cat' anglers who, duped by the blog title, may have dropped in from Google for a catfish story, but I promise you this --- next time a catmammal gets it into its head to snaffle my prawns and kill my fish it it'll end up on a big hook as bait for its meat eating namesake, my aversion to live-bait fishing notwithstanding! 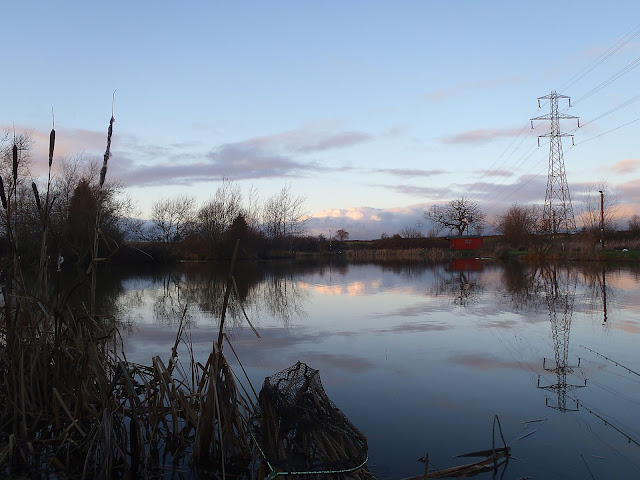 Email ThisBlogThis!Share to TwitterShare to FacebookShare to Pinterest
Labels: Perch