Up in The Wilds beyond the woods and well beyond the reach of watching eyes is a swim where I've fished three times lately and with mixed results. The first time I dropped in there a few nice roach and a single dace were caught in a couple of hours. Bites, they came every cast but there was a bit of a wait involved before they materialised. The second was an hour spent there, a desperate last minute river switch at the end of a long biteless morning spent on the Leam with Phil Mattock. The bites? Well there were none at all, not even the slightest tremor, which for this stretch of the Avon is almost unheard of it being so full of fish. 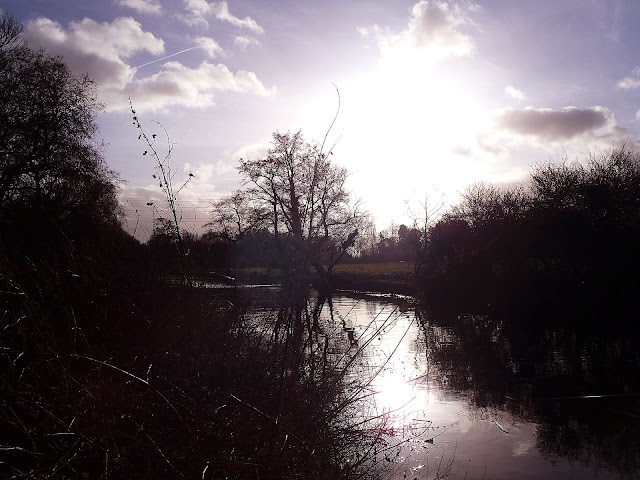 Yesterday was remarkable. It started out as an arranged pike trip with Martin that was cancelled last minute due to his wife coming down ill (hope she's well now mate?) and then a change of plan for a trip to the Saxon Mill stretches of the Avon.. In the car on the way down I realised too late that I'd failed to charge the camera batteries, hence the lack of pictures here. What with the camera blinking red I would have to save what little power it had left for a personal best fish!

Well, I don't think I have ever had so many bites across so many hours from any swim on any river, canal, pond or lake in my entire fishing career but missed such a large proportion of them. It was extraordinary. Every cast turned a bite and they came just as soon as the lead settled, endless raps and tremors, nudges, knocks and trembles but rarely were any of these bites solid enough to strike at and even those that were, rarely found a fish. I got through no less than ten slices of bread punched out into biscuits and that's 220 baits at twenty two per slice and perhaps a thousand bites or more, there being upwards of five raps per cast!

It started out plain sailing. The first cast was made before any feed had been put in, just a hook with a biscuit of bread on it, and two minutes later a couple of trembles heralded the attention of a roach who eventually pulled the tip around firmly, and the first fish of the day came to hand. The second cast was retrieved after a bite-less five minutes, recast and then a second roach came along. They weren't large fish, but I hoped they were the preliminary signs of a cracking afternoon ahead as their bites had been so predictably roach like and very confident one's at that, in fact just the kind of bites roach angler's pray for but are so often disappointed.

A couple of slices of bread were mashed up in river water and pitched to the head of the swim, a cloud of milky white and falling particles that would eventually arrive on the river bed at the point where the lead was landing and hopefully drive those roach wild with enthusiasm for the largest particle of all, that one with my hook in it. It did just that but as so often happens with roach the feed often serves to achieve the precise opposite of what was intended and it simply drives the fish into a feeding frenzy that results in the most impossible bites, and that was precisely what I got. From there on in the confident early bites vanished only to be replaced with endless, and quite useless, raps and knocks but hardly ever a nice firm tug, which is what you have to wait it out for. I had clearly misjudged the situation and quite possibly destroyed my swim in a single stroke by feeding too much, too soon.

Two slices of bread mashed in water may not sound a lot but it can have far reaching effects. If there's chub laying three swims or more downstream two slices will create a trail of attraction that will bring them up to your swim within twenty minutes. Dace are great travellers too and the will move also. Roach on the other hand won't move at all. The shoals have a linear patrol that goes up and down twenty or thirty yards and they stay put which is why three anglers fishing consecutive pegs will have such markedly different results with them, the angler fishing in the patrol route out-roaching the others by ten to one.

This was precisely what happened yesterday. On the opposite bank is a paddock and whilst I was fishing two anglers arrived and pitched in the two swims directly above me. They float fished maggots all afternoon and had not a single roach while I managed, in the end, to catch seven or eight despite the crazy situation with my bites. No amount of free maggots attracted them up from my swim to theirs across the entire five hours we fished together. I won the inevitable match, by a mile.

What they did catch were dace and very small ones too. They started catching dace at around the same point I noticed a marked change in my bites. All of a sudden the whole gamut of finicky, but unmistakably roach-like bites became confused by the arrival a new kind of bite entirely. Now the tip would bounce, something it had not done so far. I thought it might have been the arrival of the chublets coming up on the bread trail, fish who do make the tip bounce but there were no vicious six inch twangs accompanying, which is their hallmark. Eventually I managed to hook one and it was not a chublet as suspected, but a dace. Over the next hour I caught a few more, but none to get excited about.

I tried everything in my armoury of devices and adjustments to slow the bites down as they were arriving so soon after the cast that the bread could not have time to swell and soften, meaning I was having to strike through dough rather than out of a soft mush, the bend of the hook impeded and not able to do its job properly. Nothing seemed to make much of a difference. It was impossible to handle, and even waiting an hour for the feed to clear and feeding no more mash at all, had no effect. The bites remained immediate, and all but impossible, regardless of my endless experiments.

Then a haphazard strike met with an altogether heavier or stronger fish, I really thought a had a very nice roach coming to the bank, close-up saw what I thought was a small chub, but only at the last moment as it slid over the rim of the net, realising that it was actually a big dace and clearly a new personal best. It looked enormous compared to the three or four dace I'd had earlier. I really thought it would weigh ten ounces or more so got out the trusty brass spring balance, put the fish in a blue plastic bag, and hung it.


It's a curious effect when you catch a string of small fish, how very large a fish twice the size of those caught prior to its sudden arrival appears to be. It's also true in reverse when a string of large fish is followed by one half the size who seems insignificant by comparison even though that fish would have appeared large itself if it had been preceded not by big fish, but by a string of tiddlers...

I thought there must be some mud in the shaft of the balance but it was as clean as a whistle. How could this be? Here was a fish that looked really enormous (for dace!) but clearly was nothing of the kind. It was what these stupidly accurate and reliable scales told me it was, just under half a pound and missing the 'specimen' bracket by eight drams. Nevertheless, it was a solid personal best by half an ounce as all the largest dace I caught around here a couple of years ago were weighed on 32lb scales and you can't trust ounces below a pound on such scales -- so the seven ouncer that was my previous best really could have been six, or even eight. These brass ones of mine go up to four pounds only and are buggers when it comes to small fish, serially disappointing me with their accursed accuracy!

Then of course, I was dace fishing from thereon in, finally having attracted some fish really worth going after. A ten ounce dace is the equivalent of a two pound roach, and a one pounder certainly equivalent to a three pounder and it seemed there was a chance of a dace to beat my best again, so sod the roach! Next fish though, it was a roach and the best roach of the day.  Now I was either doaching or raceing, which is a very confused kind of fishing, let me tell you. It was useless though. After that encouraging brace of fish I struck away, but to no avail, at every kind of bite I thought could be struck but only succeeded in self harming...

Striking a bite, half way through the arc my arm seized solid as a sharp pain from above the elbow shot along the nerves and entered my fevered brain. The repetition of constant casting and striking had taken its toll, and I had 'angler's elbow', my first ever, fishing related, repetitive strain injury.

I suppose it was inevitable. 220 baits cast over five hours is a cast and a strike every 1.3 minutes but at a pace of only 2.4 fish per hour, and that's an awful lot of stress on the arm building up the whole time, if not the mind too...

I didn't last long after this and packed down at dusk wishing I'd taken a pint of maggots along with the bread, had some very fine wire hooks like Kamasan B511's and not fed a crumb of ground-bait till I really had to because you can't take out what you've put it in. But hey, that's roach fishing! The myriad complexities, perplexities and endless confoundments of the sport is what makes chumps of grunts like myself and precisely why good roach anglers used to be (perhaps still are?) so highly regarded. One day, I'll grow a full beard, live by a chalk stream and there I'll while away my dotage getting to grips with this deceptively easy, but really very difficult fish.  Perhaps I'll even master them, on more occasions than not...

I got all the way to the car park of the pub but then remembered that I'd left a reel on the bank. Sure enough it was missing so we, that's Judy, Molly and I, ventured back in the dark with a torch in hand to find it.

We bypassed the haunted woods by taking the route through the arable field... 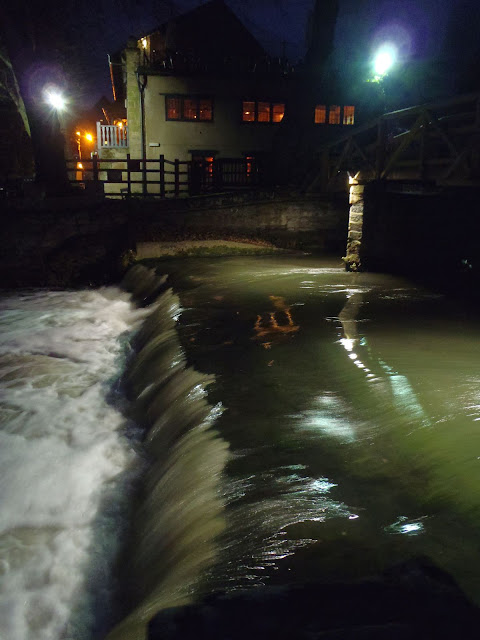