A number of people have enquired recently about how I make my widget floats, the ones I use for fishing for pike and zander at night. The original article doesn't go into great detail so I thought perhaps I'd create a new one... 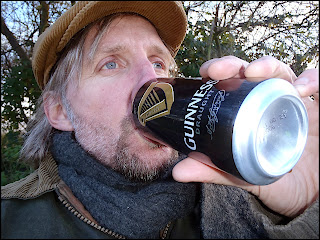 These floats are cheap (if you like Guinness!) and that's why I made them in the first place as I can't afford to lose shop bought pike floats at upwards of £2.50 each, because fishing canals means losing gear on a regular basis in far bank bushes, submerged shopping trolleys and on boats too, on occasion. Even if a sliding float drops off on a breakage, it invariably floats away down the cut but hardly ever comes close enough to the near bank to retrieve.

Cans of 'draught' Guinness each contain a plastic widget containing gas that on cracking open the full can, automatically spurts out microscopic bubbles that give the beer its creamy head. Cut the empty can open with a penknife and get the widget out. This object is perfect for the job of making a night-float as it has two opposing valve holes that can be pierced through and then a wooden cocktail stick passed through both to provide something to put the nightlight on at one end, and a swivel on at the other. The result looks like this ~ 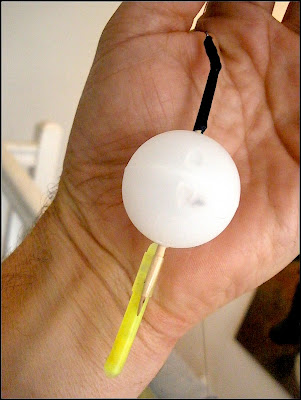 You have to be careful not to open up the valve holes any more than is absolutely necessary to allow the cocktail stick in. There is a problem though. The holes are not dead central but actually offset somewhat so when you pierce the valve holes the cocktail stick will not meet the hole you have made on the other side. If you wiggle whatever you are using to pierce the holes to accommodate then you make the holes slightly over size and this is no good. What you need to do is bend the cocktail stick into a shallow curve, and then it will find the other hole and pass through.

Before you fit the cocktail stick (but after piercing the holes) shake the widget to get all the residual beer out as liquid in the centre affects buoyancy, which is precisely why you need to bend the cocktail stick, avoid over-enlarging the holes and thereby create a loose fit that will allow water in. Of course you could just glue the sticks in and be done with it, but that would mean that you could no longer repair the float should the stick break in use, an operation that can be performed on the bank with spare sticks stowed in the tackle bag. 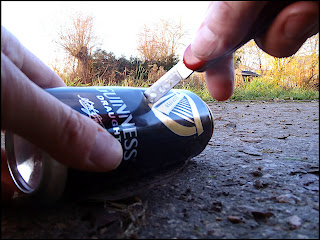 Put the stick through both holes so that one projecting end is longer than the other. Once this is done, you need to fit some kind of line attachment at one end of the stick. Get a short length of silicon rubber of the right diameter to slide up the stick but grip well, then take a suitable swivel, pass a 12 inch length of strong line (8lb) through the silicon rubber, through the eye of the swivel and back through the silicon. Now grip the two tag ends of line and pull the swivel into the silicon up right over the barrel of the swivel. Fit this to the longer end of the cocktail stick. 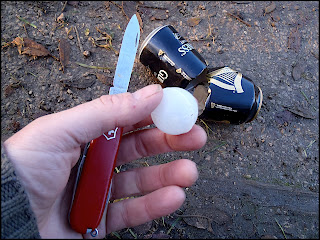 The other end can take either type of the night lights commonly available. Those designed for rod top use with a central groove down the middle will fit the cocktail stick snugly in the smallest sizes. These are so bright that you can see the float easily at well over two hundred yards distance! Those designed for float top use have a plastic sleeve in the packet -- insert the night-light into the sleeve and then push the stick between the night light and sleeve to fit.

The float is ready for use! 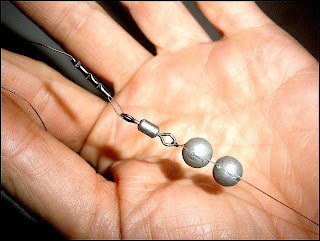 I use this float as a slider with a moveable stop in the form of a small split shot pinched at the right depth and the float anchored by a pair of swan shot (or a drilled bullet) pinched on the line just above the swivel of the wire trace. The reason I have the float sliding is that casting the rig very close against the far bank features where the zander invariably are in daylight, it seems, is made far easier by the short distance from float to hook. It is very compact, does not swing around wildly on the cast and as a consequence causes fewer accidental run-ins with trees, boat awnings and the like. Deadbaits do not make attractive pendant baubles, believe me! 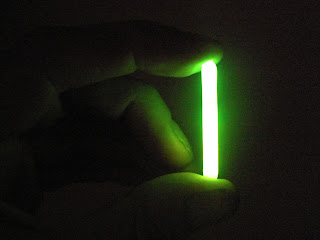 The depth is set so that the bait is laid on the bottom with the shot on the deck too in really windy conditions, but at other, calmer times, with the shot hanging so that the bait and trace is only touching bottom enough to prevent tow pulling things out of position - and this is when bite registration is at its most sensitive of all. To allow the bait to wander and search around for bites,the rig is set under depth with the bait above the deck, of course.

The top heavy float cocks and rides at anchor, but because of the off-centre holes in the widget, the float rides with the chemical light acting as a weather vane pointing backards from the wind direction. This has the desirable effect of indicating not only stability, the bait and rig all set up just so, but because the float is inherently unstable without the counterbalance of the weight it also gives an immediate warning of the introduction of any further instability, such as a fish picking up the bait and staying put, as zander often do (ledgering does not show this at all, but it happens frequently hence incidences of deep hooking) when the float can make all kinds of small but decidedly odd lurches and movements, even keeling right over. 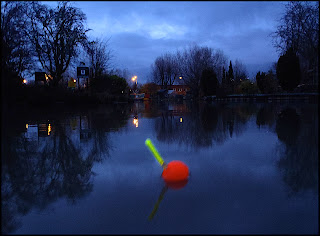 At night with a bright light atop the float the effect is startling, incredibly visual and most exciting - when a fish moves off at speed, as they often do if there are competitors around, then the chemical light can be seen traveling underwater. If you have seen Jaws and remember the way that the barrels behaved when the shark made off, then you'll have some idea of the effect!


I've tried widgets out of cans of Murphys Stout but they are different. These have a central hole and are larger but they still make good floats. I'm experimenting with them as they have certain attributes that makes the construction of a more advanced float possible but that's another article, another time. The originals work just as well as they ever did, and don't require much in the way of work to make, so give them a try. 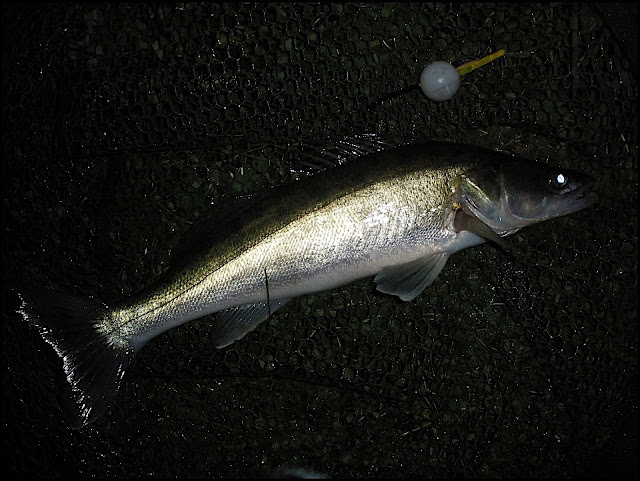