The manuscript was sent off to Bob Roberts a week or so before Christmas for his immediate perusal and what I thought would be his eventual edit but Bob was quick off the mark and had one half of the book done and dusted and back in the post before I could blink. It arrived back the day before Christmas Eve inked all over with his sterling work.

And what fantastic work it is!

It amazes me when I read it back with all of Bob's corrections in the double spaced lines and copious suggestions in the broad margins how I could ever have thought that what I had written was fine as it stood. It was simply not so. I just couldn't see the mistakes having spent so much time and energy in the drafting, but Bob could and there were hundreds of them, and consequently hundreds of suggested corrections, all of which make perfect logical sense. 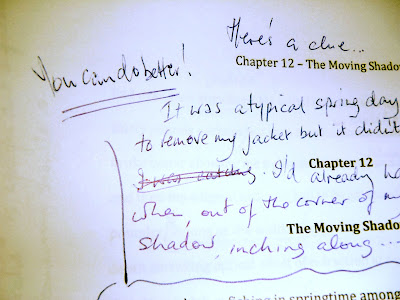 Whole sections will have to be redrafted. Some of the starts of chapters are schoolboy work to be frank coming in with a whimper rather than the bang required - Chapter 12 is particularly weak in its first paragraphs, and I just don't know how I read it through before dispatch without wincing, but I never saw anything wrong till Bob wrote in the top left hand corner, "Jeff, you can do better than this!" Then it was crystal clear. Weedy, sloppy and plain wrong-headed. Then again, there are pages and pages where the only corrections to make are little grammatical nuances. It's as if I am reading back along a time line of alternating periods of energy and tiredness, the language flowing clearly when on full song but flagging away and faltering at the end of each session of writing. It was like that, but I didn't expect it to be be revealed so ruthlessly.

Now, there's a lot of work to do. An awful lot I'd say. Weeks, and perhaps months more...

And the second half hasn't arrived back yet! 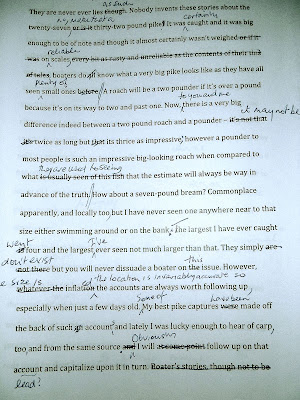 I wouldn't recommend Bob to the faint of heart. It's not that the receipt of such criticism is particularly worrisome, but the sheer thoroughness of his work leaves you gasping at your own slackness. Then again, I wouldn't suggest anyone entrust this kind of work to someone ill-qualified to do it because that would be far, far worse in the long run. It's a job that needs to be performed in this harsh (but fair!) manner if the book is ever to stand on its own feet. I revel in it myself. Though I don't relish the idea of starting work on the second draft just yet! Then again Bob's encouraging words about the thing will get me through all that.

Nose to the grindstone; there's flour to mill, bread to bake!

I'll let you know how I get on, of course.