A Bit of a Hike

I wanted to start off the fishing day by arriving fairly early in the morning to explore the wild looking upper limits of the Saxon Mill stretch starting at a place called Dropping Wells and then working my way downstream swim by swim and ending up with a bit of guaranteed roach fishing
in the tamed beat below the mill in the afternoon. I had Judy drop me off as close to to Dropping Wells as possible - it turned out that the only access to the river was through a disc golf course that was hosting a tournament but one of the organisers gave me the go ahead so long as I didn't get in the way.

At the waters edge I was miffed to see the river winding downstream below a steep wooded bluff. This meant having to climb over a fence, catching a nail and ripping a neat square flap in the knee of my jeans in passing, and then make progress along the edge of the field until I could find a way down to accessible bank. It turned out that the only feasible access for a laden angler was another half mile along the top of the bluff to a point where the land finally dropped away to the river. From here I could have worked my way back upstream if I'd wanted but the swim out front looked very attractive, so I plonked myself down there and proceeded to fish. 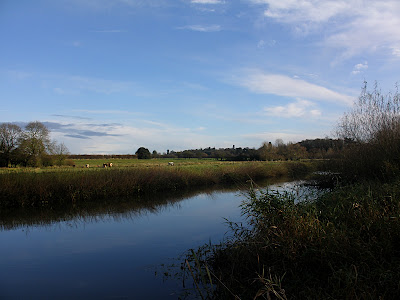 Tactics for the day were to be strictly controlled, I wanted to test out the cage feeder paternoster rig that I've been using recently in as many different situations as possible, so there'd be no deviations back to the stick float no matter how attractive an option it might seem. The rig is very interesting in that it really does create a wealth of subtle indications of activity that a short link to a running lead does not. The 12 inch stiff boom to the lead is tied from 20lb Amnesia with a large run ring at one end and a snap swivel at the other so that I can change feeders or leads at will. The boom is stopped by a large bead over a split shot so that I can alter the length of the tail at will and I am currently experimenting with anything from 12 inches up to three feet of tail. I don't pretend to understand fully what happens when fish pick up the bait and move away but depending on the direction they take, the length of the tail, the angle of rod tip to lead and the force of the current a whole complex range of indications occur at the rod top. In time, I think that I might get to understand most of them, but only if I fish the technique thoroughly. 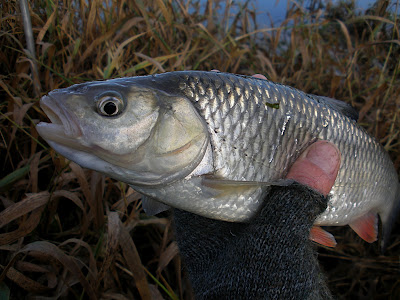 Anyway, I cast the first feeder to the far side and downstream at forty five degrees so that the feeder would settle somewhere about midstream in fairly deep water and moderate flow and put the second rod straight out and to the middle so that it would come to settle nearly under the rod top in the surprisingly deep water just out from the bank. After twenty minutes without a touch the left hand rod top began to register interest in the form of small pulls that slowly developed into stronger tugs that had the effect of pulling the feeder out of station causing the tip to spring back and forth as the fish picked up speed. The strike met with what turned out to be a chub of about a pound. This fish was followed by another two, each on subsequent twenty minutes marks with the last going two and a half pounds, and all the bites received were exactly the same as each other. These bites were absolutely not like the kind of chub bites that I have got used to, in fact have come to expect - a rap or two followed closely by a sharp pull around - they were far less explosive. I have no doubt that this is to do with the rig and its mechanics. 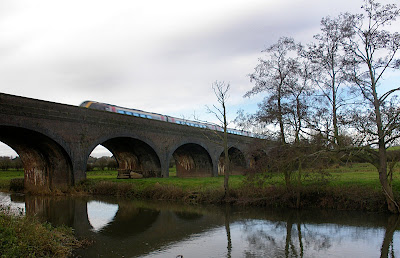 I could have stayed on in this swim and caught a succession of chub no doubt, but I really wanted to see if any roach existed up here in the wilderness beyond the barrier of the weir. I moved again and again, battling my way through forests of dead nettle stalks, to one great looking swim after another, but caught not a sniff of roach. Eventually I found another swim with flow very like the first swim of the day. First cast I hooked and lost a chub of three to four pounds... 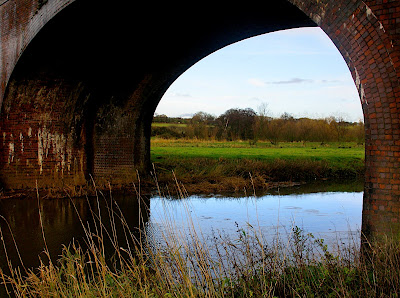 I moved down to the certain roach waters below the weir for the afternoon and had a most frustrating time with a mass of quite un-hittable bites from what were probably very small fish indeed. The moment the feeder full of bread crumb hit the bed of the river the rod top would start to move. I believe that many of these indication were actually fish attacking the feeder itself. Whatever, I could not connect. I wanted to go over to the float knowing that this would improve matters but I had to stick with the feeder, just to see if I could change one of the parameters and hook a few fish.

I tried everything and eventually had a chub and later a solitary roach at dusk but they were hard earned and their capture proved very little either way, they could just have been the only two sizeable fish to make their way through the hoards of minnows or my change of tactics may have been responsible. How would you know?

What was interesting about the day was the stark contrast between the water downstream of the weir and that above. Last week was so difficult that nothing could be said either way but today proved that upstream was big chub (some very large chub coming from the Avon right now) and possibly even untapped barbel territory if they have made it this far downstream from known barbel waters further upstream, and that downstream from the weir is really roach, dace and small chub turf. 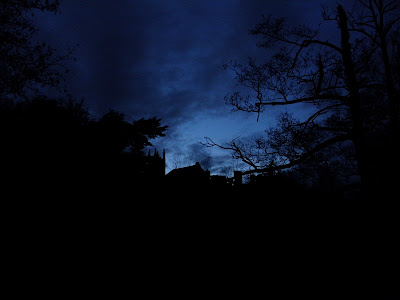