A New Book for Winter

Waters at the Saxon Mill...
I bought the Warwick District Angling Association book on Saturday...

I've been poaching their Saxon Mill stretch for months and truthfully meaning to get the book the whole time but every trip to the tackle shop has seen me arrive either sans card and not enough cash, or with card and cash but forgetting to ask for it as I concentrate my mind upon the important business of choosing hooks, lines and sinkers. Better late than never
, and they (we, now that I'm a paid up member!) can't complain now that the cash is in the bank.

It's almost exclusively a river and canal book with just one little reservoir on Warwick Racecourse for the still water angler. The river stretches were what I was interested in though, lots of interesting bits around Warwick that I might get to explore at some future point and of course, the Saxon Mill stretch which turns out to be far longer than I had suspected; almost two and a half miles of varied riverbank with two weir pools to spice things, up I believe.

The stretch is centered, as you might imagine, on the Saxon Mill pub and runs downstream all the way to the Rock Mill in Leamington Spa - the only trouble is, is that half of this downstream stretch is almost completely inaccessible under steep cliffs, including the weirpool above Rock Mill by the looks of it. The part of this stretch that is accessible runs from the pub and along the bank for half a mile or so and is the part I have been fishing lately for roach, here the pegs are well managed and numbered. I would imagine that the reason that the considerable length of bank below this has not been pegged out because it is very distant from the car park and difficult to access - too much like hard work for most but it could be fun to pioneer down there, I think.

The stretch upstream runs from the pub to a mysterious place listed in the book as 'Dropping Wells', a location that did not appear on any map, new or old, that I could find. I went out this morning to see what I could find upstream and discovered that the river directly above the mill has been canalised to force the flow into the right places and is held in place by a concrete revetment that provides comfortable pegs to fish from. At the end of this straight stretch of water I found a fence with a stile that lead me into an overgrown field - now there is no public footpath here so I guessed the stile was the for use of anglers - I couldn't tell, the whole stretch is very badly signposted by the club anyway, the river bank in the overgrown meadow was completely free of any signs that anglers had fished there before and so all clues that I was actually on the WADAA stretch had disappeared and so after the stile it was all educated guesswork.

I calculated that the fishing rights must be leased from the landowner who farms the land around Old Milverton, the village that sits atop the hill directly above the stretch and I could see that his fields extended at the very least all the way to a railway bridge that crossed the river in the distance, so that is where I headed to. On the way I found that the river appeared to split in two around an island and so I sat down to fish the interesting area where the two arms joined. The reed beds out front looked terribly roachy! I cast a piece of breadflake upstream to land just off them and sat back to wait. I got a pluck or two but nothing more positive so I tried trotting maggots but this proved equally hopeless. 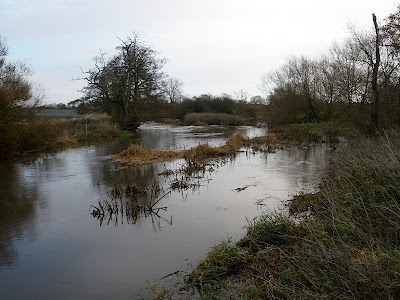 In fact the fishing turned out to be very hard going and despite moving around all over the place, trying out loads of new swims, plonking down in tried and trusted ones and getting a few bites here and there, they were mostly tardy affairs and I banked just two fish the whole day; a solitary roach and a lonely chub. This poor play was almost certainly to do with the rising levels of silt laden brown water coming through that would peak by the late afternoon after yesterdays short spell of heavy evening rain, and the unpleasant cold and miserable weather of the day.

I really should have stayed at home and played with my brand new Stonfo hook tyer!

PS. After much tinternet research I finally turned up an old OS map published in 1909 that shows a place on the bank above the railway viaduct called 'Dropping Wells' so the stretch really is as long as the club book says and well worth the £17 paid for access to it. 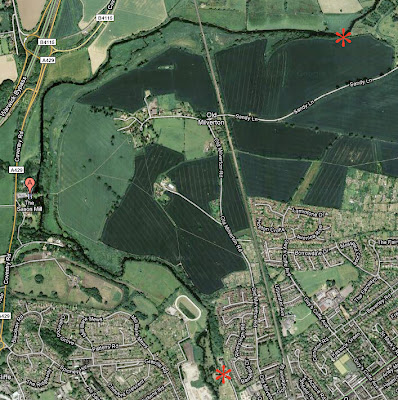