No Light, No Bite?

Keith and I had a discussion via email, a discussion about bites after dark, from roach and perch to be specific. Sage advice culled from the Internet said, we both agreed, that both these species do not, or at least do not like to bite well after the sun has sunk beneath the horizon.
Keith has a Tuesday evening slot in which he can fish and he has roach and perch as targets in his fishing challenge. I have a canal on my doorstep with a head of large roach that is coming into its prime at this time of the year, so I want to put the hours after work in, if I possibly can. We both need to be able to catch these fish so I thought I'd test this principle of 'no light, no bite', to see if it would really hold water.

I got out to a 'pond' (canals divide neatly into what I call ponds) about half a mile distant where I'd seen some big roach earlier in the year. Two rods were fished, one with a lobworm and the other with double maggot, and both legered. I had a small perch on the lobworm and then when nothing else was doing moved along and fished a spot where I'd caught a few roach just recently. Here I had no bites whatsoever and then before I'd really had time to settle properly, it was dark. 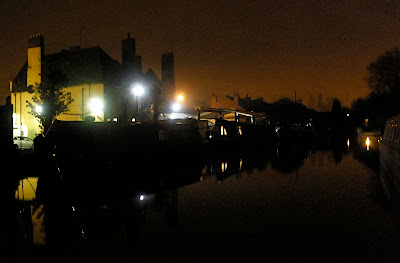 Night on the Coventry Canal

I decided to return home and fetch some roach deadbaits from the freezer and go fish for zander by the boats just up the road. In the end I decided to fish on for the roach with one rod and go after zander with the other thinking that half a chance at either was better than no chance at one. After an hour nothing had moved; the zander night float bobbed quietly at anchor off the stern of the good ship 'Platypus', the maggots out left shrivelling in the cold water of the boat track.

Now two hours into darkness a voice in my head commands me to 'fish a worm'.

Why this happens to anglers, this receiving of orders to be obeyed, is not clear, but it happens often and when it does I have learned to comply unthinkingly. So, out went the lobworm, but not before I had also decided to switch the rods over and fish the worm down the track to my right, where things felt 'just so'.

Around seven thirty the tip pulls very slightly and relaxes. It's a movement so subtle that I think it could be nothing, an optical effect of the dark, so I turn on the headlamp and scrutinise the tip very closely. The tip, though it is hardly moving at all is somehow 'alive', something down there is taking the worm very slowly and very deliberately. It could be an eel, that is possible, or even a zander, who do like their worms.

The tip makes a more decisive movement and I decide to strike now to avoid a deeply hooked fish. A fish is on but I can't tell what it is; certainly not an eel with these fast glides and jags, a perch perhaps? It arrives near the net and enters the beam of the headlamp and then I see the unmistakable outline of a quite reasonable perch. It is beaten and comes to the net without much more trouble, it flops over the lip and then I hoist the lot up to the bank, where the perch miraculously turns into... 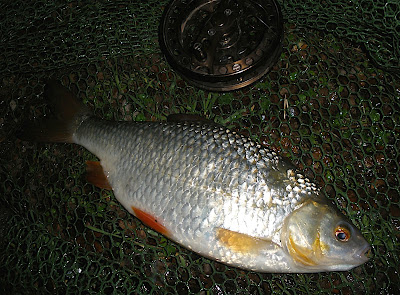 Sure enough, that is exactly what it turns out to weigh, and that's good because my once lamentable ready reckoning of fish weight seems to have improved with practice. My correct appraisal of hooked species however, clearly has not!

So much for 'no light no bite'. Debunked. Defunct.

The canal roach do indeed feed well after dark and this shining redfin beauty is the proof positive of that fact.

I stayed on for a short while after, shivering in my seat as I'd forgotten to wear a thermal base layer once again, and then went home to sit and stew in a hot bath upon my imponderables...

BTW, I have decided to attempt to keep fairly sophisticated records of weather and water conditions during my roach fishing sessions with some detail of prior events and what is on the way in the near future just to see if, over the course of time, any useful data can be extracted. I wish I'd started this some time ago...